The Books of Elizabeth Schneider
I first met Elizabeth Schneider in Nach Waxman’s Kitchen Arts & Letters when I was apprenticing under him to learn how to become a bookseller. Or maybe I met her there before I worked for him. I honestly don’t remember. It’s been over 20 years ago. I was familiar with her early work, from her columns in The International Review of Food & Wine, to her clever, kitchen-friendly books of homemade delights. Better Than Store-Bought (1979), co-authored by Helen Witty, has recipes for everything from preserves and chutneys to marshmallows and corned beef. For me, it was the first cookbook whose author’s palate seemed to jibe so perfectly with my own. And how could I not be charmed by a New York Jew whose first recipe is for “spicy country-style sausage meat” — a recipe that is all but identical, I now see, to what I would publish years later in my own first book about traditional southern cooking!
Ready When You Are: Made-Ahead Meals for Entertaining appeared in 1982, while I was living in France. I quickly discovered it on my return to the States in ’84 as the Food Editor of  the French-language magazine, Ici New York. This book was a first for me as well because it introduced me to Schneider’s meticulous research and her great command of not only the English, but also the French, language. Of Lemon Sighs (or Kisses), she wrote:
Of the several pastries given a “sigh” appellation, the majority are meringue-based. Curiously , the same cookie poufs called sighs (soupirs, suspiros) in Romance languages are known as kisses in English. Even more curious is the etymological route followed by the popular French souffléed fritter called soupir de nonne (nun’s sigh), commonly called pet de nonne (nun’s fart), but originally called soupir de putain (whore’s sigh)!
My,God! I had found a writer after my very heart and soul! I don’t know that I’ve ever actually cooked from Ready When You Are. As I’ve written elsewhere on this blog, I usually shop first, then pull a pile of cookbooks from the shelves, looking for ideas for the ingredients I’ve found, thumbing through the works of writers whom I think might know something about the ingredient (Paula Wolfert, for example, if I’ve found fresh duck or goose), or in books that are about the type of ingredient (such as Roy Finamore’s One Potato Two Potato), or in books about the country or region most often associated with the ingredient (southern, African, and Middle Eastern cookbooks for okra recipes). I get an idea of where I’m headed with the ingredient, then I reach for the books on technique: Madeleine Kamman and Anne Willan if I’m making anything French, say, or Maida Heatter if I’m baking on a humid day. I’ve come to pull Schneider’s books from the shelves for all of those reasons.
I also began to notice her love of certain drinks — eaux de vie, Sherries, Champagne — that few writers at the time were trumpeting and that I happen to like myself. And while she wasn’t the first food writer to draw attention to the misbegotten Champagne coupes still popular at the time, I loved the way she said it:
Speaking of bosoms, the origin of the wide, shallow-stemmed glass that is often used for Champagne is Marie Antoinette’s perfect breast, molded in Sèvres porcelain. Beautiful as it may have been, most agree that Champagne is better served in either a tulip-shaped glass or a tall, selnder glass (a “flute”) to maintain a slow fizzle of the precious bubbles, rather than the barrage produced by pouring Champagne into the more usual saucer shape.
And then there were her flavors: braised celery seasoned with a little marjoram, the juices drained off and reduced to serve over the reheated vegetables alongside smoked turkey; vegetarian main courses that I would actually consider serving my carnivore friends, such as a strudel of kasha, cabbage, and walnuts with dill sauce; radishes with anchovy butter (a recipe introduced with remarks by the wild 19th Century food historian, Alexis Soyer); and the appearance of some of the lesser known vegetables such as chicory, jerusalem artichokes, and celeriac, about which she would become the world’s leading culinary authority, a beacon for the rest of us food writers. 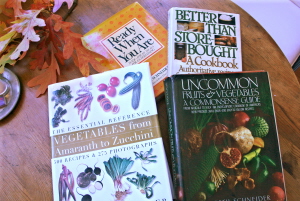 Uncommon Fruits & Vegetables : A Commonsense Guide was released in 1986, the year I opened my cookbook store, to great praise. Time magazine called it the timeliest and most truly helpful book of the year.”

I recommended the book to every single one of my customers who I considered to be serious about food, to every chef, cook, and gardener I knew. It is, quite simply, one of my favorite books. Unlike most of my books, I take it into the kitchen with me. It is ragged at the edges, splattered, and its spine is broken. While I use it mostly as a reference — and nearly daily — I also have cooked extensively from it. It would be worth its price for its lemon grass seasoning paste recipe alone, but its real value is in its encyclopedic analyses of cherimoyas, persimmons, carambolas, chanterelles, poblanos, and dozens of other produce.
Page after page on most of the entries inform and delight with historical, horticultural, and etymological information as well as the culinary. She gives precise instructions on how and when to buy the fruits and vegetables, how to select, store, and use them. Schneider then gives recipes that reflect the refined palate of a good cook who knows how to enhance flavor without meat juices or butter. Fennel, horseradish, and chili-peppers have their own entries, but appear throughout the book with other ingredients. There is glasswort and malanga, but also mango and collards (which were, amazingly, not widely available when the book was released). The more than 400 recipes come from her own kitchen and also from some of the best chefs and cookbook authors, always properly credited. Her recipe for mashed potatoes and celeriac, from the late, great Richard Sax, begins:
Richard Sax, co-author of From the Farmer’s Market, learned this simple method of preparing aromatic celery root from Richard Olney, the chief consultant for the Time-Life Good Cook series, when they worked together on those books. No milk, no cream, just full-strength good vegetable flavor. The butter, when added after the vegetables have cooked, binds, mellows, and softens the purée.
Calling on experts in the field to learn everything there is to know about vegetables would consume Elizabeth’s work for the next 15 years. I know, because we had become good friends, as well as admirers of each other’s work. Her “Produce Pro” column in Food Arts, a professional journal, and her “Vegetable Wise” column in Eating Well magazine had already garnered James Beard awards when Vegetables from Amaranth to Zucchini was released in 2001, winning Cookbook of the Year award from the International Association of Culinary Professionals.
This nearly 800-page tome, like its uncommon predecessor, is so much more than a cookbook. Each of the more than 350 entries includes an identification photo, common and botanical names, and a veritable life history of each, with information culled from hundreds of experts in a score of fields — scientists, growers, distributors, chefs, cookbook authors, and home cooks and gardeners. Again, Schneider walks us through when and what we should look for, how to use the vegetable, how to store it, and how to prepare it. She offers her bright, contemporary recipes — 500 of them! — for both common and exotic vegetables, only after she explains the best cooking methods. My favorite part, though, is her “Pros Propose” section (typical Schneider word play), in which she describes a vast array of recipes from the world’s leading chefs. In other words, she has already done the research that I describe above, so that now when I find, say, some gorgeous oyster mushrooms at my grocer’s, and wonder what to do with them, I can go to Vegetables A…Z and find not only Elizabeth’s recipes for Warm Salad of Oyster Mushrooms, Fennel, and Lettuce with Parmesan; Spinach and Blue Oyster Mushroom Salad with Bacon and Walnuts; Creamy Oyster Mushroom and Potato Gratin; Stir-Fried Chicken, Oyster Mushrooms, and Almonds; Oven-Crisped Large Oyster Mushrooms; Cream-Glazed Black Oyster Mushrooms; and Braised King Oyster Mushrooms; but also what the chefs Odessa Piper, Susanna Foo, Jacky Roberts, Nora Pouillon, Michael Otsuka, Beth Collins, and Patrick O’Connell have to say about the fungi. She even includes three of my recipes in the collection, including one of my all-time favorites, Sweet Potatoes with Horseradish. In Schneider’s book the recipe becomes:
Peel small slender sweets and slice into 1/4″ discs. Toss with grated fresh horseradish and heavy cream to coat evenly. Scoop into a baking dish, cover with foil, and bake at 400oF until slightly soft, 30 to 45 mintues. Serve at once.
There’s one more Elizabeth Schneider book, Dining in Grand Style, which is a collection of recipes from the chefs of Hilton International in 45 countries, interpreted for the home cook. It’s out of print and I let one of my best customers talk me out of my last copy right before I closed the store. Because he lived in Charleston, where I thought I would be for years to come, I knew that I could borrow it if I ever wanted to.
Stupid me.
P.S. It helps to know the author:  Elizabeth sent me an inscribed copy in perfect condition, and I’ll be cooking from it and will write about it in the future.