A version of the following article appeared in the Spring 2005 Oxford American.
Carolina Gold

February 2004. It was raining to beat hell, and we had come from all over the place — and all walks of life — to get to Middleton Plantation south of Charleston on that dreary morning to plan a symposium focused on the once illustrious rice that the fortunes of the lowcountry were built on. We were introducing ourselves and staking our claims, when Savannah eye surgeon Dick Schulze tried to describe the rice he’s been growing for twenty years.
“It’s like pornography,” he said. “I can’t really tell you what it is, but I know it when I see it.”
Well, that was a revelatory moment for me, because I thought we were all pretty sure what Carolina Gold was. We were farmers who had grown it, scientists who had experimented with it, educators who taught about it, cooks who had cooked it, developers who had found land to grow it on, distributors who had sold it, historians who had researched it, and writers who had written about it. We may have chuckled at Schulze‘s comment, but it was pretty remarkable that, in a room full of experts, no one could say exactly what our organization and symposium were about. Genetic diversity? Heritage? Taste? Nostalgia? Fanaticism?
A look into the literature of rice written prior to what I think of as the Food Movement (which followed on the heels of the Civil Rights Movement and the Women’s Movement, when the study of the work of slaves and the work of women finally became worthy of academia) reveals many romanticized versions of life on the old Carolina rice plantation. Not until the culinary historian Karen Hess began in the late 80s to unearth the pathways of the grain itself did a fuller picture of the rice plantation — and kitchen, begin to form. Using the works of the historians Daniel Littlefield and Charles Joyner as springboards, Hess launched a far-reaching, oft-hypothesizing treatise on the West African rice kitchen that was transposed into the lowcountry surrounding Charleston and Savannah. Littlefield had in the early 80s first written that it was the enslaved Africans who had taught their masters rice cultivation (not the other way around); Joyner’s Down by the Riverside: A South Carolina Slave Community (1986) shrewdly limned the task system that defined the rice plantation and set it apart from the cotton manors of the rest of the South. But it was Hess who gave Carolina Gold a heritage, a place, and a cuisine of its own.
Glenn Roberts, a huge fan of Hess’s and an ambitious grower of several heirloom grains, is the driving force behind the Carolina Gold Rice Foundation which is sponsoring the symposium in August. Roberts admits that, personally, the conference would be a success simply by having Hess speak, since her view takes in so many disciplines. But a symposium that includes tours of rice fields in August? In Charleston? In the heat and humidity? 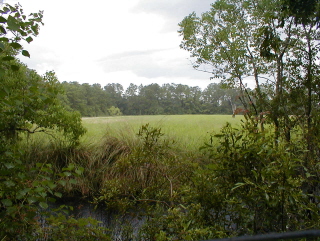 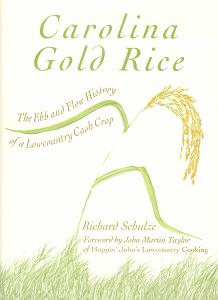 Dick Schulze has written about his experiences as a rice farmer (I wrote the foreword)) and spoke at the symposium in 2005. Richard married at 42 and is the father of a daughter. Their 2004 crop at Turnbridge was one of the best ever, and Roberts harvested double crops (August and October) from three of his fields.
Carolina Gold is now being grown in Arkansas, in several South Carolina counties, and in South America. Judith Carney, Professor of Geography at UCLA, published a stunning examination of rice and slaves, Black Rice: The African Origins of Rice Cultivation in the Americas in 2001; she, too, presented her findings at the conference; as did Bernard Herman, the Director of the Center for Material Culture Studies at the University of Delaware, whose topic is the architecture of the rice plantations. Karen Hess, unable to travel, was filmed with me in a filmed half-hour interview that is available from the Foundation.
The Food Movement may have enabled and necessitated the interdisciplinary study of foods like Carolina Gold rice, but for Schulze and Roberts, it seems that genetic diversity, heritage, taste, nostalgia, and fanaticism are all part of the story.
Schulze’s book is available from The History Press. Here’s the first draft of what I wrote for its Foreword (2005):
———————————
His roots are Texan, and he lives large: the plantations, the vintage roadsters, the hunting trips and safaris, the speedboat. But Dick Schulze has also practiced eye surgery for thirty years, delicate operations of precision and skill. He has made such an impact on my own stomping grounds, the fabled lowcountry of South Carolina and Georgia, that I can’t think of him as anything other than a Sandlapper – one of us. He’s also a farmer who has learned that all the precision and skill in the world won’t keep the rice birds out of the fields or the rains away during harvest.
It’s nearly twenty years ago now when first we met. I was researching the rich culinary history of the lowcountry and everyone told me that I should meet Dick and Tricia Schulze, who were planting the once great but then nearly forgotten Carolina Gold rice. Macky Hill, the heir apparent to Middleburg Plantation, South Carolina’s oldest home, provided my introduction, and I drove from Charleston on the sinuous and live oak canopied two-lane blacktops down to Turnbridge, the Schulze plantation just outside Savannah, on the Carolina side of the river. It was late summer and they were getting ready to harvest their legendary crop of 1988.
Dick’s bright eyes reflected his passion. His arms proudly spread out over his golden, ripe fields of grain. He talked about the land with a historian’s perspective, a doctor’s grasp of biology, a hunter’s love of the outdoors, and a farmer’s practicality. He praised the early Native Americans of Turnbridge, the Guale, whose pottery shards we stumbled upon; he cursed the Army Corps of Engineers. We shared delight at the sight of a stray roseate spoonbill on one of the alligator ponds on the property, several hundred miles north of its normal range. We were aghast at the mass of bobolinks (rice birds) in the fields, until recently no longer common in the area. It began raining, but Tricia drove with abandon through the muck, their golden retrievers at her side. Their only fear of water moccasins seemed to be for their dogs, whom they doted on. I immediately liked the Schulzes. How could I not? I had grown up with scientist parents, and not since childhood had I met others with such ebullient curiosity about the world around them.
The harvest that fall was awesome. I joined Dick and Tricia in planning their celebratory feast: each dish would feature rice, the first real Carolina Gold rice harvested in South Carolina in sixty years. Something truly worth celebrating, a moment in history worth writing about. I called my editor at The New York Times and she agreed. On December 28, they ran my story on the front page of the Living section, complete with a photo of Tricia in the rice fields with one of their dogs. Another photo featured Julius Bing, a neighbor to whom the Schulzes would always give ample credit for his help in the endeavor.
I’ve spent many evenings since with the Schulzes, marveled at their unbridled passion for life. Carolina Gold is just one of many of their muses. I watched them build Tillman, their quail plantation twenty miles north of Turnbridge, where traditional crops such as benne (sesame) are planted in succession for the birds’ peculiar diets. I saw Dick have his mason build a wall with numerous different mortar mixes, each slightly different in color, so that he and Tricia could observe the color as it aged, before they chose the right one to use in the building of their new home. I’ve watched them nurture an oak alley as though it were even more precious than their heirloom rice. I’ve shared bottles of wine with them in the birding tower of the guest house at Turnbridge, everyone stunned by an exceptional sunset. And I’ve water-skied with them on the Fourth of July, an old lowcountry test of those of us supposedly over the hill.
This is Dick’s story. Typically, he tells it without drawing much attention to himself. It’s the tale of a gentleman farmer, a sportsman who claims to be in the midst of “retiring.” I’m reminded of George Washington in his latter years at Mount Vernon, when he dove into various experiments in farming, manufacturing, and commerce. Both traditionalists, Schulze and Washington knew that perhaps the best way to preserve a culture is to do something new with it. To begin again.
I’ve been telling Dick Schulze’s story for years. Now it’s his turn.