A perfect sweet for lockdown 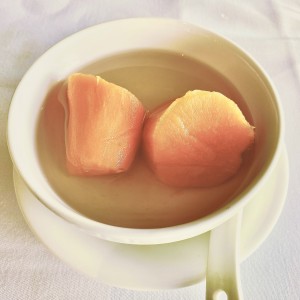 Phnom Penh; March 18, 2020: I’m hunkered down here in the gated community where we live, about a mile south of the city center, though the city is so spread out that several districts have their own centers. Mikel, my husband, is the Peace Corps Country Director here. It is a separate agency from the State Department, but we have to follow their rules for safety and security. When we arrived in July, we were housed in an apartment conveniently located near BKK – Boeung Keng Kang, long a neighborhood considered ex-pat heaven, with businesses and restaurants catering to Western tastes. The apartment was also just a couple of blocks from Mikel’s office, just off Streets 19 and 240, behind the Royal Palace, with shops full of fair trade silks, wine stores to rival those in the States, and excellent restaurants, both Khmer and Western.

But the apartment was too small for entertaining and too expensive as well. For 3-1/2 months we looked at 33 houses and/or apartments, hoping to find something the Embassy would approve. They did, finally, in this gated community, filled mostly with ex-pats. Lots of Americans, but predominantly Chinese, whose developments surround us. Since Benghazi, security is very strict. It took another 3-1/2 weeks for the upgrades to be made to the house – a 9’ tall opaque fence topped with concertina wire, bars on all the windows, a guard house for the 24/7 guards…

We now know lots of people in the compound (though some will be evacuating or moving on to other posts soon) and there’s a grocery store, a beauty salon/spa (where they do men’s haircuts as well), a very good Vietnamese Pho restaurant, and a dental clinic inside the gates. Just outside the gates on one end of the development, there is a line of predominantly Chinese-owned-and-operated restaurants and shops. Behind our house there is a huge field that was empty until recently. When they began plowing it up during the Christmas holidays, we feared that it would be more houses or a skyscraper, but, alas, it’s a sod farm. I think the owner is the Minister of Culture. I’ve heard she’s growing grass for her golf courses. The sod farm hugs the Bassac River, which is known to flood during the rainy season, though it is easily 20 feet lower now. There was no rainy season to speak of last year and we have had exactly one rain since November.

The temperature hovers near 100 degrees F in the afternoon, but I swear it never seems as hot to me as Savannah and Charleston at their worst because in the middle of the day when the sun is highest, the humidity drops down well below 50%. I walk a lot – now, because of the virus, mostly in the compound – but I carry a shiny silver umbrella that reflects the heat, and there’s often a breeze off the river.

I usually wear a mask. Mostly it’s to keep from inhaling the dust, but I also wear it because of the mounting xenophobia. Like Trump, Hun Sen is calling this a foreign virus, and the Embassy is warning us of mounting distrust of foreigners. Though we supposedly have diplomatic immunity from being randomly tested or quarantined, many shops and restaurants demand that you both use hand sanitizer on your hands and have your temperature taken before allowing you to enter. Two places took my temperature today, one of them my favorite Dim Sum restaurant that I have tried here.

SevenSea Restaurant is at the end of the street of Chinese shops, just outside the compound. It is in the ground floor of a boutique hotel that caters to businessmen – mostly Chinese. It’s just south of the grand Sofitel; across the street from the Rainbow Bridge, which leads to Koh Pich – Diamond Island, a huge Chinese development that features a mini-Paris, a mini-Philadelphia, and a mini-Washington; and not a five minute walk away from the huge Japanese mall that has everything from groceries to designer clothes, an international food court, and a cinema complex. 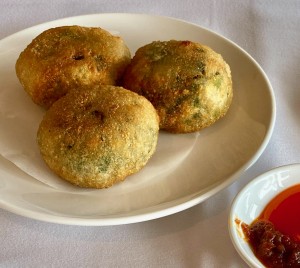 SevenSea serves myriad seafood dishes, but it serves dim sum daily from 6:00am to 2:00pm. I love their pan-fried chive cakes with pork, their steamed rice rolls with shrimp, and every one of their many dumplings that I have tried. While upscale and spotlessly clean, their prices are reasonable – none of the dishes I got today (3 dumplings per serving) cost $4. Though classically Cantonese in style and flavors, the ownership and staff are Khmer. Sokna, the young manager, speaks excellent English and is both charming and accommodating. He has always offered me a dessert on the house.

I have never had a sweet tooth and Asian desserts – often based on beans and/or gelatin – rarely please me. Some of them are downright weird to us Westerners, however sweet. And the Khmer use sugar in everything, it seems. I’ve seen ladlefuls added to stir-fries of savory meat and vegetable dishes. It’s a wonder the entire country doesn’t suffer from diabetes.

In many Asian countries, it is considered rude to turn food down, so when Sokna offered me a dessert on the house, of course I said, សូមអរគុណ  – “thank you.” What arrived was the simplest version of a Cantonese classic: 红薯姜 – Hóngshǔ jiāng – Sweet Potato (and) Ginger. In Khmer they call it Potato Ginger. It is sometimes called Sweet Potato Old Ginger Dessert in Chinese. And it might be referred to as “sweet water.”

I’ve had the dish before, but never was it so perfectly executed as the one I had today at SevenSea. I asked Sokna for the recipe, though I knew that there wouldn’t be much of one: sweet potatoes, water, ginger. Had the perfectly cooked (done but not mushy) sweet potatoes been steamed? Were they peeled first? Was there something else in the broth besides ginger? He asked the chefs to be sure.

As it turns out, there are many recipes online. They are mostly the same, though some are darker, heavier versions, with other ingredients. Most recipes call for a  3” piece or small knob of ginger, crushed; 2 large sweet potatoes, peeled and cut up; about 3 cups of water; and 60 grams of rock sugar or a “slab”of Chinese brown sugar. Most also call for cooking the ginger and sweet potatoes together in sweetened water. But SevenSea’s elegant version calls for cooking ginger in boiling water until the desired amount of ginger flavor is extracted, then adding peeled and cut up sweet potatoes to the strained broth, and only as a final correction of flavor is sugar added.

Served warm, it was simply perfect, and a most welcomed break from the virus madness. Walking the 5 minutes back to our house, I was so content with the meal that I totally forgot to stop at the grocery store.