When I lived in Charleston in the 80s and 90s, finding a decent loaf of bread was nearly impossible, so I often made my own, following the simple recipe that Mary Randolph gave in The Virginia House-Wife in 1824: the only ingredients were flour, yeast, water, salt, time, and a classic falling oven. (Here’s the recipe). I was helped along in technique by Karen Hess, who had written the historical notes and commentaries for the facsimile edition published by the University of South Carolina Press in 1984. More importantly, perhaps, was the historical perspective given by Elizabeth David in her classic English Bread and Yeast Cookery (1977). (Hess had written the introduction and cooking notes for the American edition of the book published in 1980.)

David was an inspiration to me. I had discovered her books on food – for they are so much more than cookbooks – early on in my culinary explorations. Her cookery shop in London was one of the prototypes for my own shop in Charleston, a sort of salon where people who were passionate about the food and wine in their lives could gather to discuss their gardens, hunting and fishing adventures, travels, family secrets, and dinner tables, not just recipes. English Bread and Yeast Cookery won David the coveted Glenfiddich award, but she was also elected into the illustrious Royal Society of Literature. I think she may well be the only food writer to have gained that title.

Her recipes are terse, but she frames them in a profound historical context. The 600-page bread book includes chapters, among others, on milling, bread flours and meals, yeast, salt, ovens, baking utensils, and measuring, tracing the history of each as well as contemporary applications. Her idea to simulate “the steamy atmosphere required for the successful formation of a truly ‘crusty’ loaf” by inverting an earthenware or stoneware bowl over the baking bread was revolutionary for the serious home baker of bread at the time. David traced this cloche (cooking bell) to ancient Greece.

Shortly after the appearance of David’s book, commercial cloches for the home baker began appearing on the market, but I found them hard to use because of a lip on the bottom tray that made placing the bread on it and removing it hard to do. Karen Hess later improved the method by overturning a clay pot on top of a pizza stone, superheating both of them, flipping the dough onto the heated stone with a pizza peel, replacing the pot, then capping it with a clay saucer soaked in water.

There’s no nonsense about these great food writers, however scathing they could be in their criticism of bad food, recipes, and ingredients: “Crumpets.” David wrote, “or at least terrible travesties of them, can still be bought in England, although they are more commonly sold packeted by grocers or supermarkets than by bakers. Perhaps indeed they are delivered direct from a plastics recycling plant, and have never been near a bakery.” Here’s typical Hess: “I never use a grain of sugar to activate yeast. Desiccated yeasts are maimed creatures that require pampering, but sugar (or any sweetening whatsoever) is like an overdose of chemical fertilizer. The unhealthy explosion of growth causes puffy bread, and the sugar vitiates the true taste of wheat, leaving a sweetish aftertaste that has no place in honest bread.”

One thing’s for sure: there had never been food writing like this before, and good bread had all but disappeared from the American kitchen until David and Hess came along. In 1979, Hess wrote, “There is hope. People are turning to baking their own bread, and the revival of interest in organic farming and traditional milling methods is making it easier to find the wholesome natural flours without which one cannot bake good bread.” When I met Hess in 1984, she was still baking her own bread, but within a few years she was able to buy excellent, artisan, slow-rise, natural breads in New York, where she lived until her death this year (2007).

David died in 1992, still writing. Her Harvest of the Cold Months: The Social History of Ice and Ices was published posthumously. It includes no recipes. Reprints of all of her books are widely available and there have been several anthologies or her work published in the past 15 years. Hess was still assembling her life work on the culinary contributions of Thomas Jefferson when she died. The work will be published soon by the University of North Carolina Press. 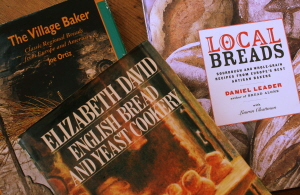 Alice Waters had opened Chez Panisse in Berkeley in 1971; California, with its temperate climate and fecund soil, had long been a leader in culinary movements when Joe and Gayle Ortiz opened their bakery in Capitola in 1978. His bread book, The Village Baker: Classic Regional Breads from Europe and America, appeared in 1993, just when I was branching out from traditional southern baking and missing the artisan loaves I had sampled throughout Italy, and which I could not buy in Charleston.

Ortiz was not the only American baker who was sharing his techniques and recipes at the time. Several other master bakers began publishing in the 90s, including Peter Reinhart, Daniel Leader, and Beth Hensperger. But it was Ortiz who first captured my attention, deconstructing the wheat grain the way David had expounded on milling, and walking me through sponge and sourdough methods of leavening, as well as the direct method that I had, up until that point, always used.

I made country-style French bread, with cumin and milk in the chef (the initial dough or starter). I made biga, the Italian natural leavening, with fermented apples. Friends begged for my ciabatta and my brioche, for my focaccia and rye. When I had trouble with one of the recipes, I called Ortiz at his bakery and asked if the instructions shouldn’t have had the missing salt, to halt the fermentation and to bring out the natural flavor of the wheat. “Add two teaspoons of salt to the recipe,” he told me. “It will improve the loaf.” But he had not made an error in the recipe that was identified as an ancient version of Tuscan bread. Earlier in the book, he had noted: “Breads can be made without salt, as is shown by bakers in Tuscany who, during the sixteenth century, were force to forgo salt in their breads because of an oppressive salt tax. They became so accustomed to the flavor that they continue, to this day, to make their breads without salt.”

And then a funny thing happened: good bread caught on in Charleston and throughout the country. Restaurants, bakeries, and even supermarkets began to make and sell artisanal loaves.
I pretty much stopped baking yeast bread.

One of the other artisanal bakers to have come out with a book in 1993 was Daniel Leader of Bread Alone, the bakery he had opened in Woodstock, NY, ten years earlier. With friends in Woodstock, I have long known the wonderful breads that come from his amazing ovens, the first of their kind in America. Bread Alone: Bold fresh Loaves from Your Own Hands won an International Association of Culinary Professionals Cookbook Award when it was released, but I somehow never baked from it. It was hard to cook from all of the nearly 10,000 books that I stocked in my bookstore at the time.,

Local Breads picks up Ortiz’s search for wholesome, hearty, crusty and flavorful loaves. Discovering local bakers with generations-old recipes mostly in central and northern Europe, Leader helps keep the traditions alive by providing detailed recipes for breads such as Czech and Polish ryes, Alsatian pain au levain, and Bavarian pretzels. He anticipates problems and gives you the answers before you even ask. While many of the recipes require advance starters such as the biga and poolish in Ortiz’s book, his Parisian baguette can be made from start to finish in 4 hours. His instructions can be painstakingly intricate, but his voice is clear and he often gives shortcuts and will occasionally note, after recommending a certain piece of equipment, that you don’t really have to have it after all. 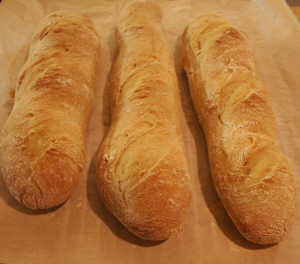 “I didn’t include this baguette in my first book,” he writes, “because it seemed too simple. But I see now that its accessibility accounts for its charm. There’s nothing like tearing into a warm baguette, fresh from your oven, just a couple of hours after you decide to bake. There are just four ingredients, no pre-ferment or starter – just instant yeast, flour, water, and salt.”

The baguettes in the photo were made per Leader’s recipe.