Phnom Penh, August 5, 2019:I have received the following sad news from so many people. 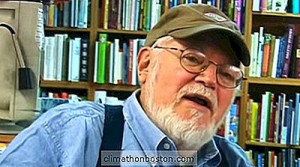 Nach Waxman was a real mentor to me. In 1984 I was working as the food editor and American liaison for the French language magazine, Ici New York. I lived on the border of Spanish Harlem, on the corner of 97th and Lexington Avenue, just a few blocks north of Kitchen Arts & Letters. I can’t tell you how many hours I spent in the store and in conversation with Nach. I was always like the proverbial fish out of water in New York City, and the first time I walked in his store, I told him that I was going to steal his idea and open a similar shop in Charleston, South Carolina. When the magazine folded, I returned south to check out the possibility. I called Nach and told him my plans.
“Do you know anything about retail,” he asked.
“Uh… I ran a record store when I got out of college.”
“Do you know the literature of food?”
“I inherited hundreds of cookbooks from my mother and I have read through them. And Karen Hess has pointed me in the direction of historical tomes.”
“Do you know the publishing business?”
“Only in France and having sold a couple of things to The New York Times.”
At which point he told me that his “right arm” was leaving him and would I like to come apprentice with him to learn the business!
Needless to say, I accepted. I was to help him during the fall season — September to New Year’s.
He had to have back surgery and we moved the store just before the holidays. In a unique New York situation, the address did not change as we moved into Rona Deme’s Country Host location in the same building. Nach asked me to stay on, which I did, until April.
I met so many cookbook authors there: Paula Wolfert, Nika Hazelton, Suzanne Hamlin, Barbara Kafka, Elizabeth Schneider, Richard Olney, Diana Kennedy, Elizabeth Andoh, and Richard Sax, among others.
I opened Hoppin’ John’s® that fall, on Thanksgiving day, 1986. Nach sent flowers.
As I wrote in the Acknowledgments to Hoppin’ John’s Lowcountry Cooking, “Nach Waxman gave me his cookbook store idea; he walked me through the literature of food and showed me how to be a businessman, which allowed me to come home to my beloved Lowcountry. I am grateful.”
My heartfelt sympathy to Maron and Joshua and Sarah.
_________________________________
“With deep sadness and regret, we pass along the news that Nach Waxman died suddenly today, August 4, 2021.
Nach founded Kitchen Arts & Letters bookstore in 1983 after a long career in publishing. He built the store into a worldwide haven for people who were serious about food and drink books. He encouraged the best authors, respected the passion and curiosity of cooks and readers at all levels, and never lost a sense of pleasure and wonder at discovering the myriad ways people wrote about cooking, eating, and drinking.
All of us who worked with him will miss him deeply. As we carry on the tradition he created, we will do so with pride and with a determination to make his legacy a lasting one.
Our mailing address is:
Kitchen Arts & Letters
1435 Lexington Avenue
New York, NY 10128