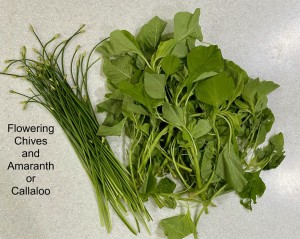 The Brassicas – one of the most confusing plant families – are highly lauded for both nutrition and flavor, but good luck trying to categorize the myriad cabbages and mustard greens that comprise the crucifers, as they’re called.  (I have bemoaned the difficulties of the taxonomy of greens on the blog before.) Many of the cruciferous vegetables don’t even belong to that family, but to the Amaranth or Chenopod family. Here in Southeast Asia, there is a staggering number of greens sold in the markets, and the common names are no help. In China, it’s even worse: what I call “bok choy” might be called “choy sum” by the vendor. Now that I’m avoiding the wet markets here in Phnom Penh during the pandemic, I find the labeling in the grocery stores – if, indeed, there is labeling – confusing at best.

Amaranth, which is native to the Americas, is now perhaps best known, like quinoa, as an ancient grain whose cultivation has the potential to feed the world. But few people grow it commercially for its seeds. Instead, its greens are valued as an attractive edible garden plant.  You might see variegated tiny leaves of it in modern bistro salads  anywhere on earth or you might find huge bunches of it for sale as cooking greens, as you do here in Cambodia and in the Caribbean. In both places, you might see it labeled as “callaloo,” which is also the name of an eponymous fish soup in the West Indies, bolstered with coconut milk and amaranth leaves or with the leaves of taro, which, confusingly, are also called callaloo.

Callaloo is actually a fairly straightforward soup: Scale, gut, and de-gill a 2 or 3 pound fish, poach it in water seasoned with whatever you want (onions, celery, herbs). Remove the fish from the pot as soon as the flesh begins to pull away from the bones. As soon as the fish is cool enough to handle, pick the meat from the bones and set aside, adding the bones to the stock. Continue cooking the broth until it is pleasantly fish-flavored. Strain the broth, add coconut  milk and lots of callaloo leaves (if you are using taro leaves, they must be cooked in several changes of water first), and, finally, the fish. With the addition of curry paste, it is remarkably similar to fish soups here in Southeast Asia. (A detailed recipe for the soup appeared on the blog on November 19, 2007.) 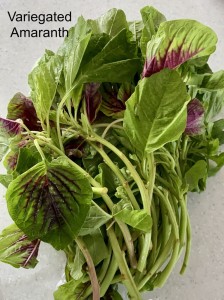 If Amaranth leaves are multicolored (see photo), they are likely to tint soups a pretty pale pink. The greens are better when cooked, the best-known dish a simple combination of amaranth and flowering chives: cut off tough stems of both and steam the greens together for about 7 minutes, until tender. Dress with a little olive oil, salt, and lemon juice, or as the Chinese do, with sesame oil, light soy, and a pinch of sugar.

So-called Garlic Chives, Flowering Chives, or Chinese Garlic Stems are available throughout Phnom Penh. They are neither chives nor garlic, though they have a delicate hint of each when cooked. Raw, they punch a bite. As Elizabeth Schneider has written, “They slip in anywhere that you want a hint of garlic with the crunch of green, in hot, cold, or room-temperature dishes.” Elsewhere, look for them in Asian markets.