A weekend in Kampot

We love it here in Phnom Penh, but there is so much of the country that we haven’t seen — mostly because of the pandemic.

Angkor Wat with no tourists

We have traveled to Siem Reap twice — once to see the ancient Angkor temples among the hordes of Chinese tourists and again last summer when we were the only people there. We’ve been to Mondulkiri in the northeast and Battambang in the northwest and glamping on the Tatai River at the base of the Cardamom Mountains. We’ve been to the islands off the south coast — Koh Rong, Koh Rong Sanloem, and Koh Tonsay. And we’ve devoured crabs at the market in Kep and Takeo lobsters (giant river prawns) down in the lower delta. We’ve bought silk from weavers on Koh Dach, an island in the middle of the Mekong not ten miles from downtown Phnom Penh, and I’ve explored the historical site at Ba Phnom (“Hill of the Ancestors”) with the eminent anthropologist Jack Weatherford.

The view from Ba Phnom

But the truth is that in our 2-1/2 years here, we’ve really not seen much of the country, and not just because of COVID, but because travel is not easy. The roads are generally not good, and travel at night is not only dangerous, but forbidden by the Embassy for US direct hires. There are so many places we want to go, both within the country and beyond its borders into its neighbors, Laos, Thailand, and Vietnam. However, now that the highway to Kampot, a French colonial town on the Kampong Bay River has been improved, getting out of town is easier. Neither my husband 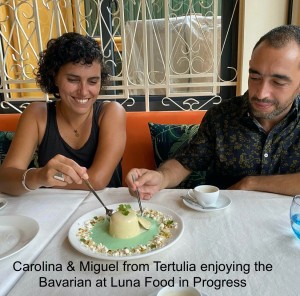 Mikel nor I drive here in Cambodia, so we hire a driver to take us south. It used to take as long as five hours; over Labor Day weekend, we got there in less than three. Everyone seems so enamored of nearby Kep (also spelled Kaeb), but we prefer the restaurants in Kampot, especially TERTÚLIA, which is owned by our friends Miguel and Carolina, and which features petiscos from their native Lisbon, from classic fresh shrimp in the shell to stunning dishes of tuna, vegetables, and beef. Cows are everywhere in Cambodia outside inner cities, but the beef is famously stringy and tough. Tertúlia’s 8-hour-braise of beef cheeks was so delicious that long after it was gone and we had all swiped the dish with bread, my fingers ran through the luscious sauce to taste again. I loved their Tiborna de Sardinha so much that I begged for the recipe and now make it at home often. We are so excited that they are planning to open a branch here in Phnom Penh!

Miguel and Carolina have pointed us to so many good restaurants, and not just in Kampot. Chef Armando’s LUNA: FOOD IN PROGRESS here in Phnom Penh serves up some of the finest Italian fare in the city. I don’t have much of a sweet tooth and I am not a fan of white chocolate, but they insisted I try his White Chocolate Bavarian, which is an enriched panna cotta served with a pistachio meringue and mint sauce. It’s elegant. As are his salads, his fritters, his fish dishes and pasta. I think his tomato sauce is the best in town. 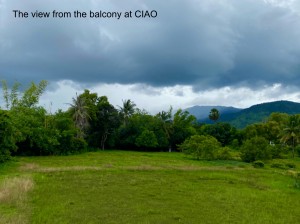 Kampot has its Italian wizard as well. We had been hearing about Chef Diego’s CIAO since we arrived two years ago. Friends would say, “There’s this Italian guy out in the middle of nowhere. He makes his own pasta, focaccia, ricotta… He and his wife make everything from scratch as you sit on his balcony overlooking Bokor mountain. You gotta go!” It takes about 20 minutes to get there from downtown in a tuktuk, and then when you get to his driveway (muddy in rainy season), it’s several hundred yards to the restaurant, which can seat about 8 people on the balcony. We arrived last Saturday at 12:30, just as he was opening. He had made fresh ricotta that morning, so we had two types of ravioli, one in his luscious tomato sauce, and another with his homemade sausage. Both divine. Like most restaurants, his business has been slow during the pandemic, but if you call ahead, he told me, he’ll make you something to order, such as tiramisù. Diego doesn’t keep up with social media, though the number on his old Facebook page is correct. (Most businesses in SE Asia use Facebook instead of websites as their business page.) 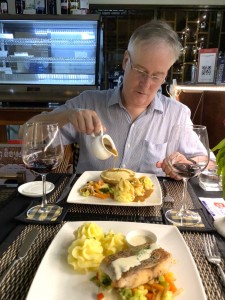 Two modern bistros in the center of town offer updated French and Continental fare. TWENTY-THREE BISTRO’s menu changes daily, featuring French classics such as confit, cheese soufflés, and composed salads.  Bob and Elmarie at the tiny, 8-seat CUISINE @ COFFEE & COCKTAILS charmed us with fresh oysters and cocktails, then really impressed us  with their Kampot Pepper Steak Pie, and their perfect mashed potatoes (the best I’ve had in Cambodia). South Africans with years of hotel experience, they got tired of hearing the regulars in what was once a bar complain about Brexit and Trump over beers, so they turned it into a bistro with elegant fare. Elmarie is one of those talented cooks who is also a brilliant pastry chef. I wish we had saved room for dessert!

Kep’s sunsets are renowned, but Kampot has them as well. It was while sitting upstairs at the bar at RIKITIKITAVI while watching the crepuscular display over the estuary that we first met Miguel and Carolina. We’ve stayed at the hotel on the premises and liked it, but are now besotted with Bas and Pauline’s delightful HOTEL OLD CINEMA. Though only the façade of the original building remains, they have recreated an Art Deco-style hotel, complete with pool, bar, restaurant, and tropical garden within the building. The bartender Pov is charming; her father was the projectionist at the old movie theater. We booked the new King Suite which has a sitting room and private balcony. 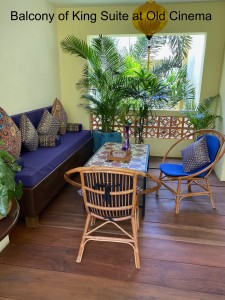 We went to Kampot for a change of scenery and to relax. It’s the height of the rainy season, so we didn’t venture out much, but the town’s intriguing colonial architecture has not been torn down or hidden behind storefronts, the way it is in Phnom Penh, so it’s delightful to walk around town. Marvelous food and drink options abound. On our previous visit, we took a day trip up Bokor Mountain and into the national park, where there are waterfalls and over 300 species of birds. Next time I’ll take my binoculars and a jacket: it was downright cool up on the mountain! 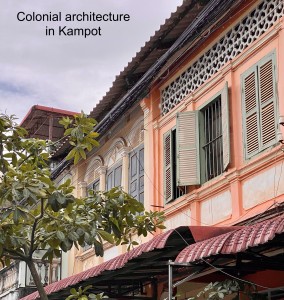