March 7, 2018. Savannah GA: I have written about both asparagus and shad roe (see March 24, 2008)  on the blog before, but when they are both in season (like now!), I cannot resist having as much as possible. I still think my mother’s asparagus recipe (right) is the best.  It promises to “Keep warm — keep crisp — keep green.” And it does. Garnish as you will.  A little butter or olive oil. Hollandaise. Romesco. Tossed in a salad. Obviously, the size of the stalks will affect the time, but this method never fails to work perfectly for me.

As I have written many times before, the lie that the South was always overcooked vegetables and pork, pork, pork is now well discredited. Immediately after the Civil War, Mrs. Hill’s Southern Practical Cookery and Receipt Book appeared in Atlanta. Fish and vegetables are finally given their due. For asparagus, she warns: “Take them up as soon as done; too much cooking injures the color and flavor.” “Vegetables intended for dinner,” she wrote, “should be gathered early in the morning. A few only can be kept twelve hours without detriment… They lose their good appearance and flavor if cooked too long.” Her devilled crabs are made with “fresh olive oil”; frogs’ legs are broiled or fried, “their meat is beautifully white; the taste delicious.” 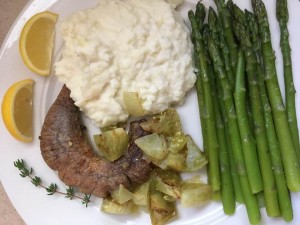 I have been shocked lately reading on social media about the revulsion that many born-and-bred coastal southerners have for shad and its roe. True, the fish is bony, but I gave explicit instructions on how to bake the shad and then bone it in Hoppin’ John’s Lowcountry Cooking in 1992 and in both Charleston and Savannah there are fish mongers who sell boned shad. I love the fish, but the roe is a truly seasonal, regional treat. Wrapped in bacon and broiled or fried, poached in cream, or sautéed with green tomatoes, it never ceases to give me great pleasure. (Recipes appeared on March 3, 2008)  The green tomato recipe that I call “Shad Roe Gilson” happened really as an accident, but it has become one of my favorite combinations (photo, left). I dust the roe with flour, salt, and cayenne (the original recipe called for black pepper, but I have been holding off on black pepper until a dish is ready to serve: the volatile oils, where the flavors are, disappear when heated). I sear it in a hot pan (a bit of butter with the olive oil is an improvement on the original recipe), then add chopped green tomatoes, cover, and braise for 10 minutes. I then uncover it and let it cook on low heat until the tomatoes are soft but still holding their shape. I usually serve it alongside grits and asparagus, but I had both potatoes and parsnips, so I made a puree. The parsnips add a bit too much of a sweet note, so I would advise that you stick with grits.