Savannah, Georgia; December 22, 2017:  If you love travel, the exotic, and food, and if you haven’t been to Morocco, GO. You will not be disappointed. From t 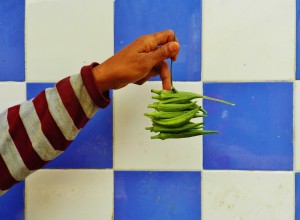 he fishing villages on the Mediterranean and Atlantic to the ski resorts of the Atlas Range,  there is something for everyone in Morocco. I remember a few years ago when The Lord of the Rings movies were being filmed in New Zealand, that foreign island nation went onto everyone’s bucket list because “it’s got everything but deserts.” But Morocco has not only deserts, but a rich cultural heritage as well. The partially excavated Berber and Roman ruins at Volubilis were once home to the capital of the ancient kingdom of Mauretania. 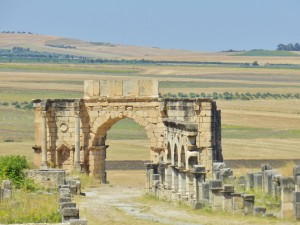 One of the city gates to Volubilis

We based ourselves in Rabat, the nation’s capital, which, for some odd reason doesn’t get the attention that Casablanca, the nation’s largest city does. Casablanca boasts a wide avenue of Art Deco buildings, and a bustling port, but I did not find it nearly as interesting, inviting, or entertaining as Rabat, where I ate nothing but street food. Its Islamic heritage is visible a every turn, and its 12th Century Kasbah of the Oudayas overlooks the banks of the Bou Regreg, its blue and white medina surrounded by French Colonial gardens. The entire city has been declared a world heritage site. 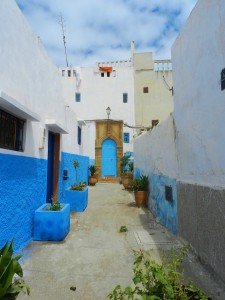 In the Rabat medina

The markets are inspiring throughout the country, with carpets, leather goods, and metalwork as vibrant as their foods. Everywhere there are street vendors. And everywhere are hawkers trying to get you to pay them for a tour, a rug, a lunch in a restored riad.

I first discovered the food of Morocco through the writings of Paula Wolfert, back in the early 70s. So impressed was I with her work (and the work of Diana Kennedy, the “Empress of Mexican Cuisine”) that I knew that I had to have their great editor, Fran McCullough, edit my first book (she edited the first two, in fact). Any chance I had to eat Moroccan food before I actually traveled there, I took. But of course being there was a revelation. 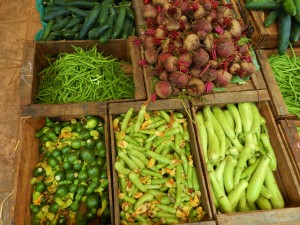 The succulent stew-like tagines which are cooked in the ingenious clay pots of the same name have become among my favorite dishes. There are innumerable varieties made with fish, lamb, chicken, and/or vegetables. Since I had just harvested my Meyer lemons, I decided to use some of the past years’ preserved lemons to make a chicken tagine with olives for friends the other night. Here’s what I did:

1 piece of fresh ginger, about 2″ by 1″, peeled and chopped (about 2 tablespoons)

4 cloves of garlic, peeled, cut in half, tough ends and green shoots removed

1/4 teaspoon freshly ground black pepper, or about 20 grinds of the mill

1 cup mixed deli olives (pitted or not) in oil, including both green and reddish-brown, drained, about 1 cup (see Note)

Several hours ahead, rinse the chicken, dissolve the salt in a quart of water in a nonreactive bowl, add the chicken, and refrigerate for 2 hours.

Cut 1/2 cup of cilantro stems and place them in a food processor. Reserve the leaves for garnish and a salad. Add the preserved lemon, ginger, garlic, jalapeño, coarse salt, pepper, cumin, saffron, and cinnamon to the processor and pulse until you have a paste. Add 1/4 cup of the oil and continue to pulse until the mixture is somewhat creamy and evenly ground.

Remove the chicken from the brine, pour off the water, wipe out the bowl, pat the chicken dry, and return it to the bowl. Cover the chicken with the mixture, spreading it all over the chicken. Set aside to marinate for an hour at room temperature or refrigerate until 1-1/2 hours before you plan to serve. 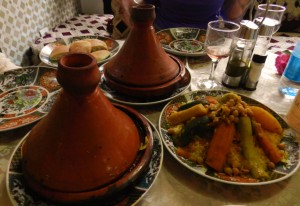 In a tagine or in a deep, heavy casserole dish that you can put both on top of the stove and in the oven, place the remaining 1/4 cup of oil and heat over medium heat. Add the onion, celery, and pepper, and cook until the vegetables are wilted, 5 to 10 minutes. Add the stock and bring to a boil, then add the chicken and the olives.

Immediately cover the tagine with its lid or, if using a casserole, place the lid slightly askew so that steam can escape. Place in the oven and cook for an hour. Turn off the oven, remove the lid of the pot, and return the dish to the oven to mellow for a few minutes. I place the crusty bread that I serve with the dish in the oven during this resting period.

Serve the tagine over couscous or rice. Garnish with cilantro leaves.

Follow with a green salad heavy on herbs, especially mint and cilantro, or with a salad featuring oranges.

NOTE: You can use pitted olives,  but for a casual family dinner, it isn’t necessary (as long as you remind everyone that there are pits.)