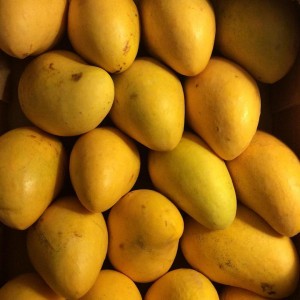 March 24, 2018; Savannah GA: There over 500  varieties of mangoes, but outside the tropics, you rarely see more than a few. I have had insanely delicious mangoes in the Caribbean, Mexico, Africa, Thailand, and Sri Lanka, but I love the so-called Champagne mangoes (left) that are in season now. Also variously known as Ataúlfo,  young, baby, yellow, honey, Adaulfo, or Adolfo, this rich, sweet, smooth-textured variety is grown in Mexico. “Champagne” and “Honey Manila” are brand names from specific growers in Mexico. They have been developed by cross-breeding the Filipino Manila mango with other varieties.

I bought a flat (18) of the mangoes from an Indian grocer here in Savannah for $9.95. I cut them up and made chutney, not much different from my pear chutney which appeared in my first book (and on the blog 10 years ago). I always jump at the chance to buy these delicious tropical fruits, but I was prodded to buy a flat of them when I realized that I was running low on chutney when I went to make country ham biscuits.

Country ham used to be a rare treat for those outside the South, but with the current popularity of the traditional and regional foods of the South, it is now easier to find. (I buy mine from Benton’s.)  Here in the lowcountry, where in addition to being the centerpiece of the Christmas table, it is pan-fried, added to pilaus, ground into pastes, and stuffed into little yeast rolls like these. Also known as bride’s biscuits or angel biscuits, these yeast rolls contain both baking powder and yeast, making them a cross between a biscuit and a roll. 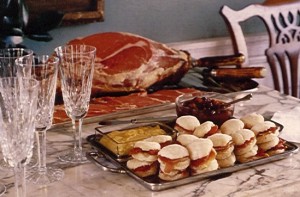 1/2 pound (about 2 cups) all-purpose flour, preferably a soft southern one such as White Lily, plus flour for dusting

Sift the flour, salt, and baking powder into a warmed mixing bowl. Cut the lard into the mixture with a pastry blender or 2 knives until it is evenly distributed. In a separate bowl, stir the yeast into the buttermilk until thoroughly dissolved, then pour the liquid into the flour mixture, stirring well until blended.

Dust a work surface with flour and turn the dough out onto it. Work the dough lightly with floured fingertips until it is smooth and evenly textured. Roll out to about 1/2-inch thick, then cut into small 1- to 2-inch biscuits with a clean, floured metal biscuit cutter.

Place the biscuits on an ungreased baking pan, cover with a kitchen towel, and allow to rise by about a fourth, about 20 minutes. Preheat the oven to 400°, then bake the biscuits for about 10 minutes. Remove the biscuits from the oven and pry half of them in half with a fork. Put a small dollop of mustard on the bottom half of the biscuit, put a piece of ham on it, and, using a demitasse spoon, put a little chutney on top before replacing the top of the biscuit. At this point you can cover the biscuits with foil and wait until 5 minutes ready to serve, at which point you return the biscuits to the oven to finish cooking, about 5 minutes more, or until the tops are lightly browned. You can run the biscuits briefly under the broiler if they aren’t browned to your liking, but be ever watchful that they do not burn. Serve warm. Makes 20 biscuits.

My usual chutney is made with our hard, local Kieffer pears (or with underripe pears), which must be cooked first. Soft mangoes are simply cooked with all the ingredients until thick. It only takes about a half hour. I use surgical gloves when peeling and cutting up lots of mangoes like this because they can be irritating to my skin, but you can divide the recipe without fail. 2 cups of cut-up mangoes will yield about 3 cups of chutney. If you aren’t preserving them to be shelf-stable, you can simply store the smaller amount in the refrigerator. Equal parts of leftover country ham and chutney can be ground together to make ham paste, a delicious spread. 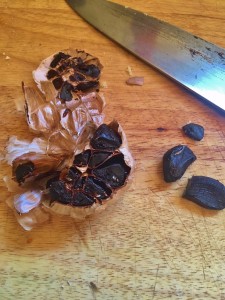 I have included some black garlic in this recipe (see photo, left). Cooked at a very low temperature for a month, the garlic turns dark brown and has the consistency of prunes. Its taste is not unlike prunes — more at tamarind. I buy it and duck products from Farm Fresh Duck. You can omit the black garlic from the recipe with no problem.

peeled and chopped cloves from a head of black garlic (optional) 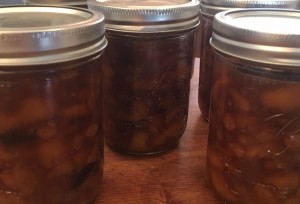 In a large nonreactive pot, bring the sugar and vinegar to a boil. Add the remaining ingredients and cook until the raisins are soft, the onions are clear, and the chutney is thick. Put into sterilized jars and process in a boiling water bath for 10 minutes. Makes 6 pints.