Me in an ancient olive tree in Puglia

Mikel and I went househunting in Puglia (Apulia in English) and took our niece Ayles, who had been volunteering at the English camp at the American University in Blagoevgrad, with us. She turned 21 in the beautiful baroque city of Lecce, often called the Florence of the South. Puglia is a land of seemingly endless olive groves and wheat fields, many of them ancient, and there are delightful villages, beautiful beaches, and fascinating archaeological treasures to be seen at every turn. We ate sea urchins and horsemeat and delicious melons. But the pasta dishes are what have made the region one of Italy’s best food destinations.

Everywhere we went, we asked about small, family-owned restaurants that serve truly local fare. We were never disappointed. In San Vito dei Normanni, near Ostuni, we had lunch at La Locanda di Nonna Mena, a self-proclaimed “Trattoria Cucina Casereccia,” where every morsel we tasted was brilliantly fresh, tasting of summer. Their homemade bread was some of the best we had in a region of the world where the  bread is as good as it gets. A dish of melanzane sott’olio was a revelation,  pickled “eggplant under oil,” with peppers and bay leaves. 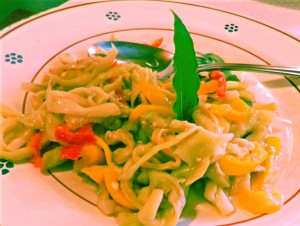 On a blistering hot day of looking at houses, the delightful owners of Masseria Boezio on the Adriatic side of Ostuni graciously opened their kitchen to us for lunch, apologizing for the simple fare, then offering us glasses of Prosecco on the house, then a scrumptious spread of antipasti including some of the best beans I’ve ever eaten, and pecorino with a beguiling onion jam with pinenuts. Pasta included the intriguing black grana arso — burnt wheat — sauced with a tomatoey stew of heritage Chianina beef, raised nearby, with a side of ricotta forte, an intensely pungent aged ricotta that is stirred into sauces in Puglia like so much garum in ancient Rome. I love it! They also offered us homemade ravioli filled with two local cheeses, and lightly sauced with oil, cherry tomatoes and basil. 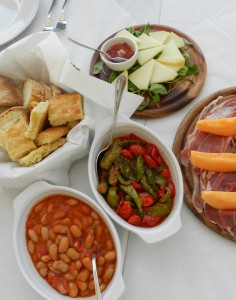 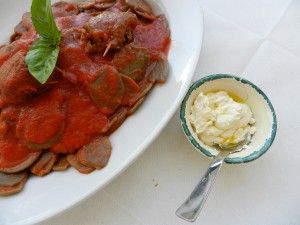 I had spaghetti with clams,  octopus stewed in a clay pot,  a delightful rice and vegetable salad served in a beachside bar, and, over and over, the amazing bread. We bought a loaf on Wednesday and on Sunday night I served it back here in Bulgaria and it was still better than most bread you can buy most places.

One of the real delights for me was returning to some places I had been before. Puglia has been widely developed and improved since I was last there.  EU money has helped pave roads and restore baroque buildings. Finding ancient dolmen is not as impossible as it once was. At Le Zie in Lecce, formerly Trattoria Casareccia of Concetta and Marcello Lagrua, Ayles ordered the Pugliese classic, Ciceri e Tria, a recipe for which I published in The Fearless Frying Cookbook in 1997. The recipe follows. 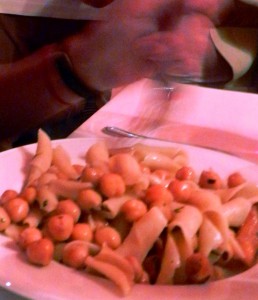 Throughout Italy the lingering legacy of centuries of trade with the Arab world is audible in the language. The dialects of the ancient port cities like Genoa and Brindisi are full of Arabic; often those words are for foodstuffs. I learned to make this ingenius regional specialty in the tiny village of Acaya in Puglia (Apulia), where it’s called ciceri e tria (chickpeas and fettucine). Ciceri is the Latin for chickpea. Tria is Arabic; the word appears in Genoese dialect as well.

In Apulia, the heel of the Italian boot, pasta is made –  commercially and at home — with nothing but semolina flour and water. Semolina is made from hard durum wheat grown in the area. The best “store-bought” pasta in the world comes from Apulia; I’ve never tasted pasta as good. It has an earthy flavor of grain and a meaty consistency. Few American cookbooks give instructions for making pasta the way they do in Apulia; eggs are invariably included in the dough.

This recipe is from my Fearless Frying Cookbook, which was released at the same time as Nancy Harmon Jenkins’s Flavors of Puglia. We had traveled together in Puglia as guests of the International Olive Oil Council and Oldways Preservation Trust.

I learned to make this dish in a restaurant kitchen, but the restaurant was new. It was owned by a brother, sister, and cousin. Everyone who worked in the restaurant was a family member, and the recipes were the same ones they had used in their homes for generations. It is a brilliant dish of basically three ingredients, chickpeas, pasta, and oil. Little bits of the pasta are fried in oil. When some famous American food writers and chefs first tasted this dish, they thought that the fried strips of pasta were cracklings!

This was originally a St. Joseph’s Day treat, but has become daily fare. In Apulia, the chickpeas are slowly simmered in a clay pot while the pasta is being made. You’ll have to soak them overnight, so begin the night before. Most American food writers will tell you that you can’t make pasta with the semolina available in the States. That’s simply not true, but you must use a very fine semolina flour. It’s made from 100% hard durum wheat, so there’s plenty of gluten to support the light paste. Serve this unusual dish as a first course.

While traveling in Puglia last week, I saw a copy of the British edition of Nancy’s book, which is unfortunately out of print. Though I have my battered old copy back home, I bought it anyway. Reading through Nancy’s recipe, I chuckled when I read that a vegetarian friend of hers had thought the fried pasta was bacon! Our recipes are very similar, but I use a food processor to mix the pasta dough. Nancy’s daughter Sara Jenkins, whose popular restaurants in New York specialize Italian fare, and I once made ciceri e tria as the first course of a Pugliese dinner for 40 in Charleston.

3 or 4 sprigs of parsley

All-purpose or bread flour for dusting

2. In the meantime, make the pasta dough. Place the semolina in the work bowl of a food processor and add 1/4 teaspoon salt. Turn the processor on, beginning with a medium speed. Gradually add the water, then increase the speed to high. Stop the machine when the dough forms a ball. Dust a work surface with flour and dump the dough out onto it. Knead the dough as though it were for bread, with the heels of your palms pushing the dough away from you, then turning the dough 1/4 turn, folding it over and continuing until the dough is very soft but not too elastic, about 10 to 15 minutes. Wrap the dough in a plastic bag and set aside to rest for at least 30 minutes at room temperature or for up to 6 hours in the refrigerator.

3. To roll the pasta, I highly recommend a pasta machine unless you have a very large marble or chopping block counter and a long rolling pin (In Acaya, it was as long as a broom handle). Divide the dough into 4 portions and keep them well covered when not working with them. Set the pasta machine on its widest setting. Flatten one of the dough quarters, dust it lightly with flour, and run it through the machine. Fold the ends of the dough in to the center, so that dough is now 1/3 its length, rotate it 1/4 turn, and run it through the machine again. Repeat the flouring, folding, and rolling until the dough is very smooth and its width is that of the machine. Begin decreasing the gap between the rollers by a notch at a time and continue the rolling process until the dough is about 1/16-inch thick (machines have different settings). Cut the sheet of pasta into 1/8-inch wide fettuccini, then lay them out, not touching each other, on a dry towel or hang them over a broom handle balanced across the backs of 2 chairs. Repeat the process with 2 more batches of the dough. With the last batch, do not set the fettuccini out to dry, but cut the noodles further into 1- to 2-inch portions. Leave them on the work surface, but cover them with a damp towel.

4. Bring a large pot of water — at least 4 quarts — to a rolling boil over medium-high. Drain the chickpeas and remove the aromatic vegetables so that nothing but the chickpeas remain. Put the oil in a large sauté pan over medium-high heat. When the water comes to a boil, add about 1/2 teaspoon of salt. Add the dry pasta gradually, always keeping the water at a boil. Increase the heat to high and stir the pot occasionally so that the pasta doesn’t stick to the bottom of the pot. In the meantime, uncover the fresh 1-inch strips of pasta and fry them in the hot oil until crispy and golden all over, about 2 minutes. Set aside to drain on paper towels. Decrease the heat under the oil to medium. The only way to know when pasta is done is to taste it; do so often. As soon as it loses its raw flavor, dump it out into a colander in the sink. Shake the colander to make sure all the water drains off, then add the pasta and the reserved chick peas to the oil. Turn off the heat and toss the mixture around, making sure everything is well-coated with oil. Season generously with pepper, then divide the dish among 4 pasta bowls, garnishing each with the fried pasta strips.