August 21, 2007: I sketched the logo for Hoppin’ John’s back in 1985, a full year before I opened my culinary bookstore in Charleston. I originally planned to call it “The Educated Palate,” but no one but me liked the idea.

On January 1, 1986, I arrived at my friend Kelly’s New York City apartment for a traditional southern New Year’s Day feast, saying, ”I’m here with the hoppin’ john,” to which several folks in his lilliputian kitchen replied, “No, you are ‘Hoppin’ John’!” The name stuck and there was no doubt what the store would be called. Kelly, incidentally, was my roommate when I was in graduate school at the University of Georgia, and we both have made our livings at times as photographers. He took the gorgeous photos for Hoppin’ John’s Charleston, Beaufort & Savannah, my book published by Clarkson Potter that looks into 15 private homes in those lowcountry cities with a menu replete with recipes for each of the homes. Though the first two printings quickly sold out, Clarkson Potter chose not to reprint it after my editor and friend Roy Finamore left the publisher. Here are both the original sketch for my logo and the finished version that many of you know from my bags of grits and cornmeal.
Many of you also know my logo from the many books you bought from me through the years. Though I no longer sell books (except those that I wrote myself),  I am constantly asked for recommendations. I plan to use this space on my blog to feature books that I have found to be helpful. I do not plan to list all my favorites. The list will also not be a “best of” list because I’ve never seen any of those that seemed complete in my opinion. And, after all, this blog is nothing if not my opinion. Some will wonder where are Marcella Hazan and Julie Sahni. (I honestly don’t know how I managed to go from 10,000 cookbooks to several hundred and not have any of their books in my current library, but there you have it.) And some of you will ask about tv chefs. (I’ve never owned a television, so I don’t know much about them, unless I’ve been on their shows.) The list will be very personal, but I intend to explain why I like each book so much. 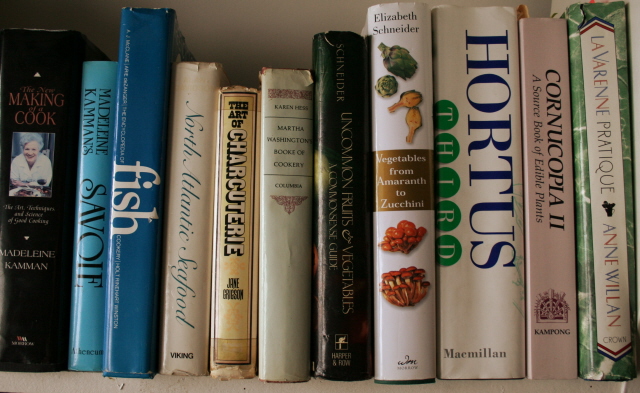 Here’s a bookshelf in my office. Yes, I must be honest: the books were not in this particular order on this particular shelf. The photo is purely to demonstrate a point: that I tend to like books that I can use as a reference. Books that are encyclopedic, or authoritative, are particular favorites of mine. Madeleine Kamman never lets me down. Nor does Elizabeth Schneider. (And I am not embarrassed — indeed, I am proud — that they are my friends as well.) I wouldn’t even be in this field if it weren’t for the late, great Jane Grigson, whose book on charcuterie was four decades ahead of the curve! As you can read elsewhere on this site, the culinary historian Karen Hess was both friend and mentor to me. Both A. J. McClane and Alan Davidson have steered me right on many confounding species of fish and shellfish. And a quick look into Anne Willan’s La Varenne Pratique invariably will give me the correct proportions for a soufflé or mousse or sauce that I seldom make.
While I’ve always maintained that anyone who can read, can cook, I also have always cautioned readers to find out whose recipes work for them and to stick to those writers. There are some very, very popular cookbook writers whose books I simply cannot abide. But this blog will not become a rant. I will focus on the real “joy of cooking” (and, by the way, my copy of that book was my mother’s that she bought new in 1946 for $2.50).
You will note in the photo that two of the books, Cornucopia II and Hortus Third, aren’t even cookbooks. Neither are The Oxford English Dictionary, The Papers of Henry Laurens, or my Petit Robert, which take up several feet on my shelves and which I consider an integral part of my culinary library.
Rarely do I, in fact, cook a recipe exactly as it is written in a book. I inherited hundreds of cookbooks from my mother, who was a great cook, and not one of them had evidence of grease stains, tomato sauce, or even random water splashes! She taught me to find beautiful ingredients first, then go sit down with a stack of books and go through the ways different writers or cultures deal with those ingredients. She would then scribble her own version of what she planned to cook on a piece of paper and stuck it to the stove hood with a magnet. I’ve followed her example for 40 years. Say that I find a nice, fresh, plump rabbit at the market. I will invariably bring it home, pour myself a glass of wine, and come into my library, where I will look at what the French might do (Anne Willan and Madeleine Kamman, yes, but Richard Olney and Roger Vergé as well), what Diana Kennedy has to say about Mexican rabbit dishes, take a look in my various game and southern cookbooks (particularly those from the mountains, where my father was reared and where rabbit is revered), and perhaps browse a bit online as well, taking my other ingredients and my time frame into consideration. I also think about the weather, what kind of day I (or my partner) will have had come dinner time, how enthusiastic about cooking I am, and — most importantly — what I’m in the mood for. Sometimes, I’ll simply grill or pan fry the lovely meat I’ve been reading about for an hour or more!
But I will have learned a lot in that hour, and I’ll be better informed the next time I’m in a market and see a fresh, plump rabbit, and will know what other ingredients I should be buying to enhance its flavor.
As for now, I’ve got to go cook supper!
Click on the links on the left to read about specific books.