Posted on February 6, 2012 in Bulgaria, Travels 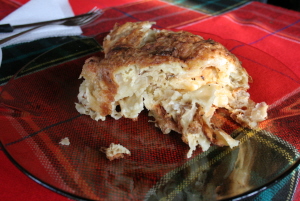 Banitsa (Баница in Cyrillic) is one of the national dishes of Bulgaria. There are probably as many versions as there are cooks, but few home cooks younger than 70 make the filo-like dough themeselves. Tiny grocers, no bigger than newstands, often sell refrigerated filo dough, which is also often called banitsa (accent on the first syllable: BAHN eet sah), though kori means filo dough as well. Banitsa can also mean the savory pastries that are eaten by the thousands as a morning snack, most often with a glass of boza (a thick, fermented millet drink) or ayryan (a salted mixture of water and yogurt). The most common banitsa is filled with a mixture of sirene (SEE reh neh), a fresh, usually brined cheese related to Greek feta which can be made from sheep, cow, goat, or water buffalo milk; yogurt; and eggs. These flaky pastries are also sometimes referred to as byurek, from the Turkish börek, which are found throughout the former Ottoman Empire. They figure prominently in both Mizrahi and Sephardic Jewish cuisines. (My friend Corrine Capilouto, from the vibrant Sephardic community of Montgomery, Alabama, makes her dough in a similar fashion to the way I was taught here in Bulgaria by a 77-year-old woman from a village north of Kyustendil, near the Macedonian border.) 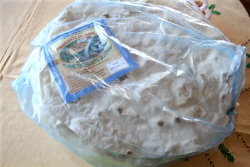 The image above is yet another type of cheese-and-egg banitsa that was made by Svetana Gergova Hristova in the tiny northwestern Bulgarian village of Moravitsa. Sveti (her nickname) used dried filo sheets from her local market. In the photo at left, the label says ruchno tocheni kori za banitsa — “hand-made, thin-rolled pastry for banitsa,” which she soaked in water with a pinch of baking soda before layering the sheets with the filling. Sveti also makes a sweet pumpkin- and walnut-filled banitsa, which is called tikvenik. I’m not sure what the baking soda is supposed to do, but it is sometimes added to traditional banitsa to react with the acid in yogurt, making for a fluffier filling.
Of course the names of these pastries often change as you go from village to village in Bulgaria, and they are served throughout the year for celebrations, particularly on New Year’s Eve and Epiphany, when good luck charms are placed inside the ”pies,” a tradition that endures throughout many European, Latin American, and Mediterrean countries, as well as in French Canada and the Gulf Coast of America, where King’s Cakes are sold by the thousands throughout the Carnival season. Mlechna banitsa (“milk banitsa”) is a very sweet version; Rhodopska banitsa, from the Rhodopi Mountains, is more soufflé-like. Zelnik is filled with cabbage (zele); luchnik has onions or leeks; spanachena banitsa, made with spinach, is my favorite.
Evtimka Koleva’s Banitsa
When I was looking for a housekeeper, I decided that I wanted someone who would speak no English with me, but, not speaking Bulgarian, I wanted someone who would speak French or Italian, so that I would have the rare opportunity to speak those languages which I USED TO SPEAK. I found a French-speaking wonder woman, Emilia Tsvetanova, who has become my source for many things. Through word of mouth, her skills became known in the expat community here and soon she was working around the clock (I only have her come here once/week). When a friend of mine called her, asking if she could work for him as well, she was totally booked, but she recommended her friend Evtimka Koleva. As a thank-you to me (who had nothing to do with her getting the job), she sent me a huge, homemade spanachena banitsa, easily the best I’ve ever tasted. It measured 50 cm (about 20 inches) in diameter. I took it to Mikel’s office to share with his staff, all but two of whom are Bulgarian. They were all stunned by the quality of the pastry. Everyone could tell that the dough had been handmade. They asked if I would order two of them for their Christmas party, which was funny because I had already decided that I was going to ask her if she would let me pay her to watch her make one. Emilia was my go-between and translator. Evtimka came to my house and, working on a table that was too big, too tall, and without a smooth surface, she turned out the most elegant dough I’ve ever seen. “You must be able to read the newspaper through it,” Emilia said. Here’s the recipe, with photos of the process.

For the filling:
500 grams (about 1 pound) spinach, steamed, drained,
and chopped
400 grams (about 3/4 pound) sirene or feta, rinsed and
patted dry
olive oil
To make the filling, mix the spinach thoroughly with the cheese. Olive oil leftover from the dough-making is added to the filling. 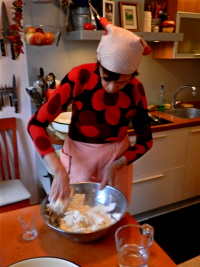 For the dough:
1 kilogram flour (about 2-1/4 pounds)
1/2 teaspoon salt
1 egg
1 teaspoon vinegar
1 cup olive oil
600 – 700 ml water (about 2-1/2 cups)
To make the dough, put the flour and salt in a large bowl, blend, and make a well in the center. Add the egg, the vinegar and most of the olive oil. Blend with your hands, bringing flour from the outside into the center, mixing all the ingredients until well blended. Gradually begin adding the water until you have a maleable dough that all comes together. Add any remaining oil to the spinach filling. Turn the dough out onto a work surface and knead it well until it is springy and manageable. Divide the dough into 8 to 10 clumps of equal size, then, lightly flouring the surface if necessary, roll each clump around until it forms a nice little ball about the size of a dinner roll. Place the balls in flour-dusted container, cover with a dish towel, and allow to sit for 20 minutes.

Now comes the fun part. Take each ball of dough and roll it out, over and over again, into a circle. As it becomes thinner and thinner, flip one edge up over the rolling pin (Evtimka uses a mop handle), then roll it out again and again, repeating the process over and over until you have a dough that is thin enough to read the newspaper through. Transfer each gossamer layer to a cloth-covered table or bed or any surface big enough to hold it. Then walking around the table, gradually stretch the dough out as thin as you can possibly make it. Repeat with each of the balls of dough.
For the filling:
Reserved spinach and cheese mixture
125 grams (about 4 ounces, one stick) unsalted butter at cool room temperature 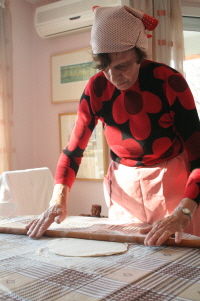 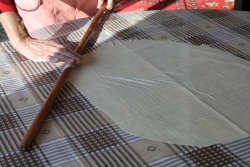 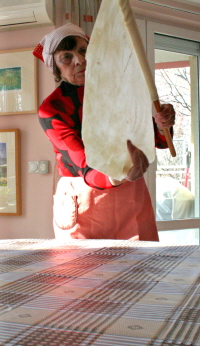 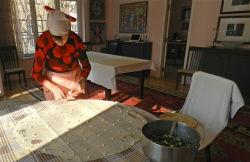 To add the filling, pinches of butter are dotted all over the surface of each sheet of pastry, then the spinach/cheese mixture is scattered around evenly as well. 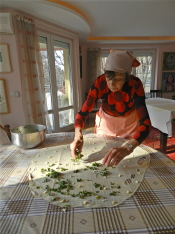 Each sheet is then loosely rolled in from each side, enclosing all the filling, then the rolled-up sheet is coiled into a snail shape as tightly as possible without tearing the dough. The snail is placed in the center of a 50 cm circular baking dish.

Each sheet of dough is covered similarly with the butter and the spinach filling, rolled up, and then the coiling shape is continued in the pan, tightly filling it.

For the finishing touch: 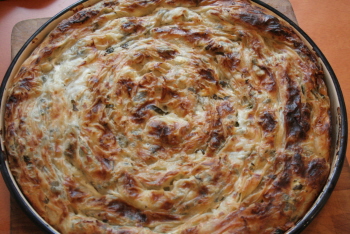 about 1/2 cup yogurt
Beat the yogurt until it is very light, then paint the top of the banitsa with it. Bake in a 350o F oven for about 20 minutes or until it is evenly browned. Serve hot, warm, or at room temperature. You can wrap the banitsa, refrigerate it, and reheat it later if you wish. This large banitsa will provide hors d’oeuvre for about 25 people.
Here’s a little video of Evtimka rolling the dough. There are other methods, including twirling it over your head, the way some pizza makers do, but this is how I was taught.