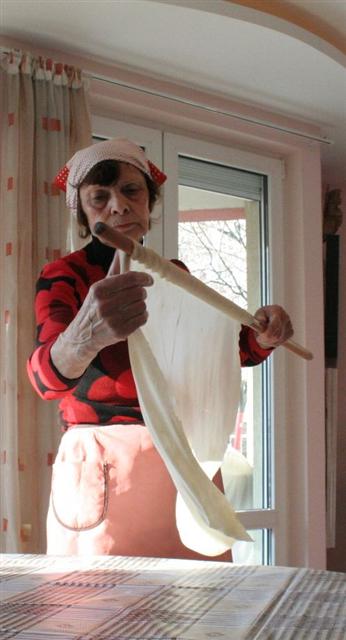 Sorry I’ve not been blogging a lot lately. I’m working on the 20th anniversary edition of my first book, Hoppin’ John’s Lowcountry Cooking, which will be published by the University of North Carolina Press in Fall 2012. Yesterday’s Washington Post ran a story about Hoppin’ John in which I am quoted. You can read it here. I have been cooking and entertaining a lot, and doing lots of research as well, including learning how to make banitsa dough. Banitsa is a traditional dish in Bulgaria that is made with their version of filo dough. The amazing 77-year-old Evtimka (left), who is a friend’s housekeeper, came to my house to show me how. I’ll be writing about it and editing the film clips, but first I must finish the revisions to Lowcountry Cooking.

I’ve also been writing up our trip to Istanbul here, but I’ve not yet finished. My sister sent me cowpeas, so I’ll be making hoppin’ john myself and taking it to a friend’s house on New Year’s. Here is my article about my namesake, which is in the current issue of Gastronomica.

I have been blogging here for almost five years now. Most of the holiday dishes I make regularly, such as ham biscuits and roasted pecans and cheese straws, I’ve long since written about — many four years ago in December 2007.

Here in Bulgaria, as I’ve written before, I truly miss the leafy green vegetables that are such a big part of the southern table — collards, mustard greens, turnip greens, beet greens, kale, etc. I am told that they are fed to the hogs. I am reduced to buying huge quantities of spinach to which I add just about any other root tops I can find — radish greens, for example — for flavor. I hope you all have a happy, safe, and prosperous new year. 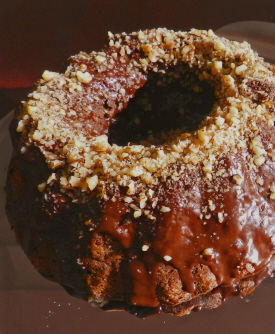 This cake is very easy to make. No layers, just a bundt cake and you drizzle chocolate all over it. It’s nutty and rich and the perfect ending to a vegetarian meal. I usually whip some cream and serve alongside. The recipe came from George Wearn, an Atlanta filmmaker who once shot a pilot for a lowcountry tv series with me, but which, alas, never came to pass. I hadn’t made the cake in a long time. It’s a winner. I published it in my second book, The New Southern Cook (1995).

In the South, a “chocolate” cake is usually a yellow cake iced with chocolate. “Devil’s food” is a chocolate cake with any number of white icings; a cookbook published in Orangeburg, South Carolina (my home town), in 1948 has 5 “devil’s food” cake recipes (some calling for mashed potatoes as an ingredient), 3 “fudge” cakes, and several other chocolate cakes under the “layer cake” section. “German chocolate” cake (see my blog on Barbados, January 2008, for a recipe) is always iced with a coconut and pecan icing. The only way you’ll get a chocolate cake with chocolate icing in the South is to call it just that.

Most versions of this popular dessert are in layers with a shiny, near black icing made with boiling water. The updated recipe that follows was given to me by George Wearn, a television producer from Atlanta, the director of my television series and a fine cook himself. The cake is very rich, and the icing is poured on like a sauce.

I have since found that if I heavily paint the inside of the pan with melted butter, then turn the pan upside down on a plate and let any excess drip off onto the plate, then the pan is evenly, thinly coated and there will be not clots of flour and butter, ruining the Bundt shape.

1 cup (1/2 pound or 2 sticks) unsalted butter, softened, plus butter for greasing the pan

3 tablespoons cake, pastry, or soft southern flour, plus flour for dusting the pan

Preheat the oven to 350°. Generously brush an 8″ to 12″ bundt pan with melted butter and dust with flour (see above).

Melt the chocolate in a double boiler over simmering water, then set aside to cool. In the large bowl of an electric mixer, cream the butter until it is perfectly smooth, then add the sugar and beat until the mixture is fluffy. Add the  egg yolks one at a time, beating well after each.

Sift the flour and cocoa together then add to the butter mixture, beating on medium low speed. Continue beating and add the melted chocolate, nuts, and vanilla, blending all together well.

With clean, dry beaters, beat the egg whites and cream of tartar until they are stiff but not dry. Fold a fourth  of the whites into the batter, then gently fold in the rest of the whites. Turn out into the prepared pan and bake for about 50 minutes, or until the cake forms a crust and cracks, but the center remains moist. Set the pan on a rack to cool and run a thin sharp knife blade around the sides and center of the pan to loosen the cake. Allow to cool for 15 minutes while you make the icing.

In a heavy saucepan over low heat, melt the chocolate with the cream and the honey, stirring until smooth.

Turn off the heat and allow the pan to cool somewhat. Turn the cake out of its pan onto a plate after it has cooled for 15 minutes, then pour the icing over the top of the cake, allowing it to ooze over the sides. Sprinkle with the ground nuts. Serve warm or cool. 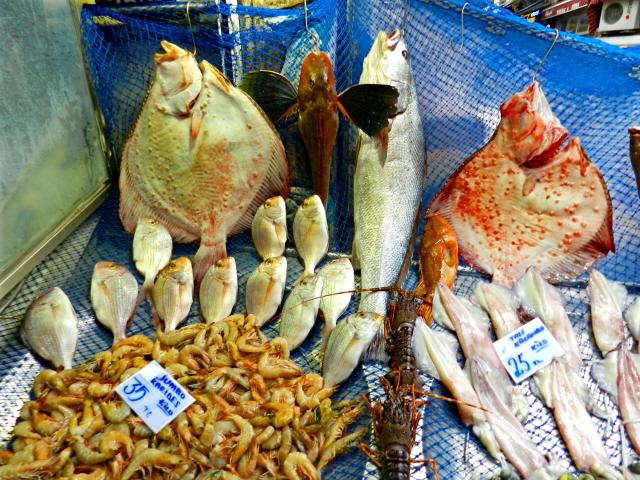 The leaves on the trees surrounding our apartment in Sofia have almost all fallen now. We’re having a rare rain today, so I imagine the few remaining ones will be gone by the end of the week. I can see Mount Vitosha in the distance now, and the ugly Soviet bloc apartment buildings all around me are now visible behind the bare trees. It’s been warm here, though — the upper 50s every day for a week — and we’ve not yet had a sticking snow. We’ve been traveling a lot lately, so I’ve not blogged much — though I have managed to post some photos on Facebook. Feel free to ask me to be your Facebook friend, but realize that my Facebook page is far more personal and political that this mostly culinary/travel blog. I’m pretty much a stark-raving liberal, and proud of it. I don’t let folks openly comment on this blog because I’ve seen the heinously ugly remarks that people write on forum walls that are not monitored. The internet is, after all, no more than a graffiti wall where anyone can say anything. My grandfather once told me that the death of penmanship signaled the end of civilization. I’m glad he didn’t live to see today’s nasty scrawls on the net!

I’ve still not blogged about my travels to Romania, the Struma Valley, or Turkey, because I am pitching the stories elsewhere. (The Washington Post will publish an article of mine on Transylvania some time in 2012, plus I have two short pieces that will run in Gastronomica, the academic food journal, in the next year as well. The current issue of the quarterly has my article on hoppin’ john, the dish. You can read it here.) I’ll provide links when the articles are published.

Today is Nikulden, or Saint Nicholas Day, in Bulgaria, and the fishmongers have moved their shops outdoors to the streets. Because most Bulgarian families will celebrate with a fish dinner — carp, per tradition — at home with family this evening, fish is purchased by even those who normally don’t eat it. Even the smallest dealers, whose tiny shops normally feature only fresh sardines and anchovies amongst the farm-raised sea bream, sea bass, and salmon, have mounds and mounds of carp, catfish, and fish I haven’t seen here until now. Yesterday I saw shtuka — pike,  vatos — ray, and kalkan (turbot), as well as hundreds and hundreds of sharan (carp). My Greek fishmonger, Costas, had some fresh water fish I’ve never seen before. “You don’t want these,” he told me. “They smell.”

I’ve never eaten carp that I can recall. It’s been farm-raised for thousands of years (in China since 500 years before Christ). I’ve never caught one or bought one. A. J. McClane, whose 1977 Encyclopedia of Fish Cookery is still my go-to reference book on fresh water fish (Alan Davidson’s books on North Atlantic and Mediterranean seafood are my ocean bibles), says “If you catch your own carp the fish should be killed and bled immediately by cutting through the body from the back of the head to the rear of the gills. The dorsal or ‘back’ fins can then be cut out and the scales and outer skin removed by a process known as ‘flensing.’ This requires a very sharp, thin-bladed knife.” Since none of the fish I’ve seen in markets have been bled, I’ve always avoided them.

I was tempted to buy a pike, which I have only eaten in quenelles and — once — in a country auberge in France, where it was simply poached. I’m glad I hedged. When I got home, I pulled out McClane and read: “All members of the pike family have very dense slime on their bodies, and scaling these fish in the ordinary manner is a messy job at best.” Well, I thought, I’ve dealt with eels. Surely they can’t be worse. But, truth of the matter, I don’t have a big tub I could have put the fish in and covered with boiling water — or into a very salty bath, the way I prepare eel. McClane continues: “The problem with pike cookery, if you are to roast a stuffed whole fish, is that at any edible weight a pike is long. A 4-pound fish, for example, may be from 22 to 30 inches in length.” He then admitted, “I personally don’t feel it’s worth roasting a pike much under 6 pounds.”

What I’m wondering is this: How does anyone here in Bulgaria roast an entire pike, unless they do it outdoors? I’ve yet to see an oven bigger than mine, and I call mine the “Easy Bake Oven.” The pike I saw yesterday was nearly a meter long.

Saint Nicholas, the patron saint of fishermen and sailors, is also known as the Miracle Worker by Bulgarian Orthodox Christians. I’m surprised it’s not a national holiday since it is a major winter festival celebrated on December 6. Westerners revere St. Nick as the patron saint of children, but he is also the protector of archers, students, and — you gotta love this — merchants and thieves as well!

The photo of the fish above was taken in Istanbul on Thanksgiving. When I posted the photo on Facebook, Costas responded that fishmongers here in Bulgaria must display their fish indoors, on ice (this week is the exception). It’s because of EU rules. If Turkey is indeed going to be admitted to the EU, I’m afraid that the open air markets and the street foods that define so much of Istanbul will be forever altered. I have begun blogging about my trip here. In the meantime, happy St Nicholas Day!