09/16/07 Summer’s end: Pesto and Melon
It’s been a less-than-perfect summer, with temperatures near the century mark for weeks on end throughout much of the country. Between the drought and the rodents, our community garden suffered so much so that we did not get a single melon from the literally hundreds that were on our vines, all of which were heirloom varieties that I grew from seeds — Jenny Lind, Green Flesh Honeydew, Casaba Golden Beauty, Yellow Canary, Louisiana Sweet, Ananas Melon, Georgia Rattlesnake, and, the melon of my youth, the oblong Charleston Gray.
Mikel and I went by the garden yesterday one last time, before leaving for two weeks in England. Lo and Behold! After having every other melon hollowed out by rats, there, without so much as one tooth mark, was a perfectly ripe Charleston Gray, all 36 pounds of it! 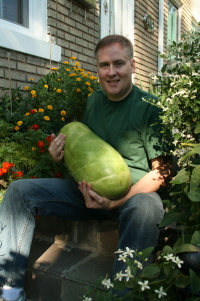 All summer long, the neighborhood children and our next-door neighbors, Leila Greene and Janice Butts, who gardened with us, have had disappointment after disappointment in the garden, even as we learned more about gardening and enjoyed the spring and early summer crops that ripened before the drought. We immediately put the melon on ice and invited everyone over for dessert after supper. Here are Miles and Kiki Randall enjoying our only melon of the year on our stoop last night. 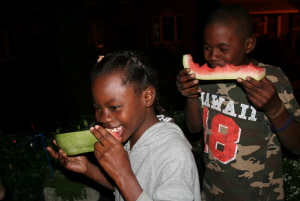 I got to tell the kids how, when I was their age, we would go down to Edisto Beach with our friends, the McGees. The big meal was always in the middle of the day. In truly southern fashion, there would usually be two meats — say, fried chicken and a ham. Vegetables were always from the neighboring truck farms — just-picked corn, field peas served over rice, squash casserole, and sliced tomatoes. After lunch, we would play cards for an hour, then we’d each get our own long, narrow slice of a Charleston Gray and take it out into the ocean with us, swimming and body-surfing and allowing our melon slices to float nearby, seasoned by the sea water. To this day, I love my melons seasoned with a little salt and pepper, though last night it seemed only appropriate to enjoy this special fruit of our labor au naturel.
BASIL
Since the weather dipped down into the fifties last night, I don’t expect to have much basil left when I return from England. Two ways I go about saving some for later use: by freezing it and by making pesto. 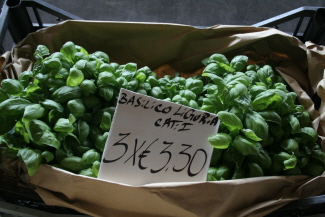 The freezing technique I learned, if I recall, from a television program that I happened to have seen while I was at a friend’s house waiting for him to get ready to go out. I don’t own a tv. Never have. I think it was Jacques Pepin. At any rate, I’ve been doing it this way for a couple of years now, and it works quite well: put a bunch of stemmed basil leaves in a large shallow pot, cover with water, and bring to a boil. The hot water kills any bacteria or bugs, but you don’t want to let it keep boiling or it will lose its color and flavor. Immediately dump the contents out into a sieve or colander and let the basil drain of excess water without mashing it. When the water has all drained off, make little mounds of basil, each about 1-1/2 tablespoonsful, and place them, not touching, on something flat that will fit in your freezer. I use a small cookie sheet covered with wax paper or parchment. When the basil is frozen, I then toss the little balls in a freezer bag, where I can conveniently pull out a mound or two to use in recipes throughout the winter. It retails its bright green color this way. I usually chop the still-frozen mound of basil with a little salt and a half-teaspoon of herbes de Provence to add to savory dishes such as soups and pasta sauces.
PESTO
Having lived in Genoa, Italy, the home of pesto, I feel a sort of proprietary right to the dish. I was, if I’m not mistaken, the first food writer to write about the food of Liguria, the northwestern panhandle of Italy of which Genoa is the capital, for The New York Times back in the 80s. I have seen pesto made, both in Italy and in the States, in innumerable ways. There are as many “authentic” versions among Genoese cooks as there are real gumbo recipes amongst Cajuns. I own a half-dozen Ligurian cookbooks (in Italian) and another half dozen in English. The recipes vary widely. Even Fred Plotkin, whose work I greatly admire, offers 17 pages of recipes in his marvelous Recipes from Paradise (Little. Brown; 1997), and they differ from the version he offered in his equally brilliant The Authentic Pasta Book (Simon & Schuster, 1985). 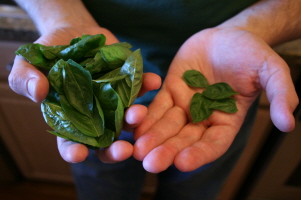 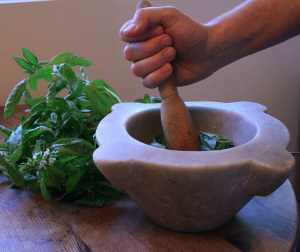 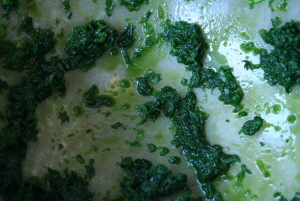 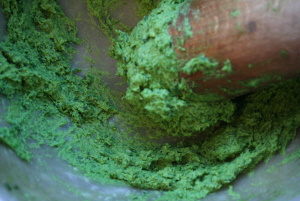 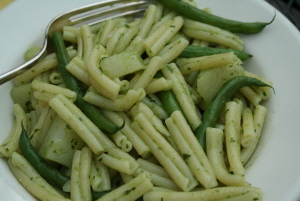 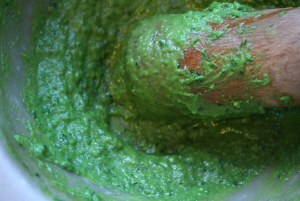 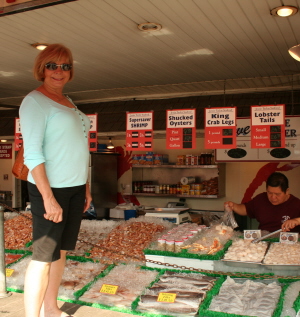 downtown near the Jefferson Memorial where she wanted to get some rockfish, which she ate often as a child. The fish I cooked in a very hot oven on a bed of our home-grown shallots, with a garnish of fresh corn cut off the cob and browned in butter. But the real catch of the day were the beautifully fresh, sweet, sticky, huge sea scallops (in their own juices, no water added) that the fishmonger is packing for us here. I bought 6 scallops for the three of us; they weighed a pound. I then reduced some shellfish stock that I had on hand with 1 large shallot and the juice of one orange, cooking it down until it was about a half a cup. I added the juice of 1/2 lemon and a tablespoon of vinegar to the pan and continued reducing until the sauce was beginning to thicken, then whisked in 2 tablespoons of butter to form a silken sauce. Meanwhile, I had lightly seasoned the scallops with salt, pepper, and cayenne, and seared them in a very hot skillet, lightly brushed with oil, for about one minute on each side, then moved the pan off the heat while I finished off the sauce. At the last minute, I added the sections from one more orange and served the scallops on warmed plates in a pool of the sauce. YUM! 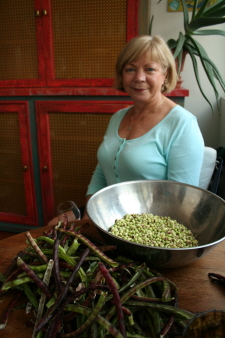 On the way home from the Wharf, Debbie and I stopped by the DC Farmers Market where we bought fresh bulk sausage and eggs for our Sunday breakfast, and fresh field peas, okra, crookneck squash, eggplant, and green peanuts. I boiled the peanuts and we had them with my new ”house” Champagne, the non-vintage L. Aubry Fils Premier Cru, Brut Tradition from Jouy-les-Reims. The Aubry twins were growers who used to sell most of their fruit to Veuve Clicquot. Now they make delightful, yeasty wines that are unique, using as much as 50% Meunier in some bottlings. I no longer buy Champagne from the big houses and love to seek out the smaller grower-producers who hand-craft their wines, as the Aubry brothers do.
You haven’t lived until you’ve had boiled peanuts with Champagne!
We went out to the Eastern Shore of Maryland for the weekend with plump quail that I tossed on the grill with freshly picked figs. Debbie brought a magnificent Cornas with her — the La Louvée 2003, made by the “King of Cornas,” Jean-Luc Colombo. To serve with it, I made a dish on Saturday that was a variation on Paula Wolfert‘s salad of duck confit with cabbage, chestnuts, and watercress (using the last Kieffer pear that conveniently fell to the ground as we were there in lieu of the chestnuts, freshly picked arugula instead of watercress, and a half cup of crushed fresh raspberries in place of the sugar Paula’s recipe calls for. One makes do with what one has!) 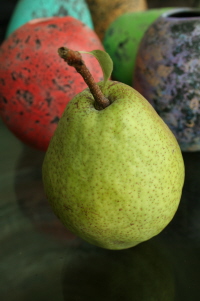 The hard pear I cut into batons, lightly seasoned them with salt and pepper, and put them on a searingly hot pan (but off the heat). I then tossed the pears with the cabbage that had been curing for about a half hour at room temperature, dressed with the raspberry vinaigrette. I had made duck confit a couple of weeks ago, and I seared the legs until the skin was perfectly golden and crisp, and served them atop the salad, tossing the cabbage with the arugula at the last minute, along with toasted walnuts.
Kieffer pears are a type of hybrid that originated near Philadelphia. They are the one type that will produce fruit right up to the ocean’s edge and in the South, so they are a local favorite. 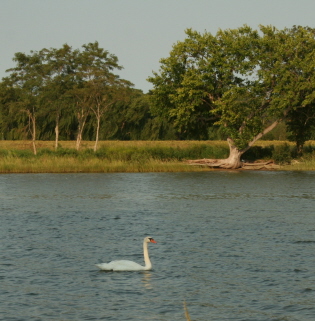 Their flesh is crisp, like an Asian pear, and can be too hard to eat out of hand.
They are the ubiquitous pear of the southern farmhouse, usually appearing in preserves, chutneys, and relishes. It was a beautiful weekend, with gorgeous sunrises and sunsets, canoe and kayak trips, and abundant wildlife sightings. On the way back into the cove from the canoe, I spotted a native persimmon tree laden with fruit. I hope I get to return for their harvest in late October, and that I can beat the possums and raccoons to them. If you’ve never been to the Eastern Shore of Maryland and you have the chance, be sure to go! It’s beautiful.
Labor Day Weekend 2007
I have spent most of this week framing photos to send to a group invitational being curated by Dana Downs and which will open later this month at Brick House Studio in Crawford, Ga.  I won’t be able to make the opening because I’ll be in Merrye Olde England, but do plan to go if you’re in the area. The Brick House belongs to painter extraordinaire Lamar Wood, who has been restoring this early 19th century plantation house outside Athens. Among the other photographers to be included are Curtis Knapp, Jim Fiscus, Rinne Allen, and Michael Lachowski.