KAREN HESS
November 11, 1918 — May 15, 2007
Here’s my very personal essay about my relationship with Karen Hess, a version of which appears in the Fall 2007 Gastronomica. For more about Karen, see John’s Work. 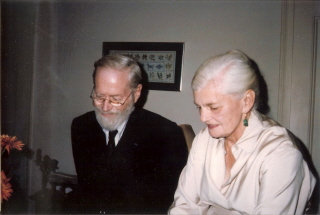 Karen gave me this photograph of her and her beloved husband John. I’m sorry to say that I don’t know who took the photo. I also am not sure who took this other photograph of her, barefoot in her Manhattan kitchen, baking a rice pie in 1991, when the two of us were working in tandem on our books about the foods of the Carolina lowcountry. 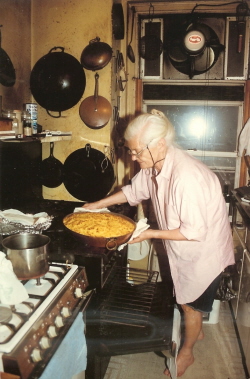 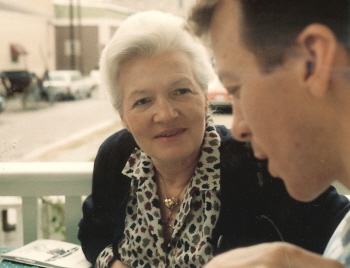 And another great cook and marvelous dining companion. She was saddened by my loss, and comforted me in ways that no one else could, reminding me that the very things that bothered Karen bothered her as well, such as the lack of curiosity in modern America, and, in particular, our abandonment of public education. When I told her that I was working with children in an inner city community garden, I could feel her glow over the phone. I had heard that same glow just less than two weeks ago in Karen’s phone voice, the day before she had her stroke. The day before she made a big pot of black beans with both ham and bacon.
Those phone calls are what I will miss most. And that boisterous whoop and cackle of joy that those who have sipped champagne with Karen Hess know so well.
I was always in awe of her, but I never feared her. She loved nothing more than a sparring partner, someone who would challenge her hypotheses or enlighten her about some corner of culinary history that she hadn’t uncovered. She loved to learn new words, to shop at the New York Greenmarkets she had championed, to eat in the small Sicilian restaurant in her neighborhood that she was afraid would be discovered. She kept promising to take me there, but I am almost never in New York. The last time I was, it was a blistering hot day in July and Karen and I were filmed in a half-hour conversation in her unairconditioned apartment. We were supposed to go to the restaurant, but it was just too damned hot. It was the only time I’ve been with Karen that we didn’t have a celebratory glass or two of champagne. She was sad. Her husband John had died. In tears, she once said to me, “We were soul mates longer than you’ve been alive, for heaven’s sake!” She made raspberry sorbet with her big new Italian ice cream machine that she was inordinately proud of. With a touch of champagne. But it was just too hot to eat.
“We had hoped to take you to our favorite little restaurant,” her son Pete, whom I would come to be friends with, said.
Karen added, “It’s not Italian, Love, but Sicilian.”
Love. That’s what she called me.
_____________________________________________________