I was asked to write an elegiac piece about the Gulf oil spill and oysters for the Washington Post. I refused to be paid for the article, because I could not see profiting from others’ misfortunes. Please read the article and make a donation to one of the charities who are prepared to help deal with the disaster.

Those luscious, incredibly sweet and juicy Lowcountry Sweet Onions are available again, but supplies are limited. I wrote about these remarkable onions last May and last June (scroll down to June 25) and I’m really excited about having them in my kitchen again this year. If you mention that you read about them on my blog, you’ll get a special price! 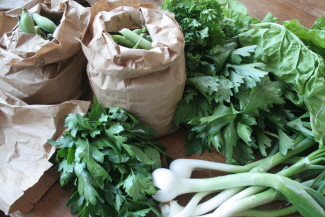 It’s been a very busy summer, with lots of guests (my 19-year-old “daughter” is living with us), and lots of friends dropping by with the cornucopia of their gardens, such as the fava beans, green peas, scallions, parsley, and celery pictured here at right, which were a gift from our friends Maurice and Liliana Dumas, who are 70-something working chefs. I’ve been eating the fava beans with salami, but the peas I simply shelled and put in a pan with a little butter, covered the pan tightly, and let them cook over  very low heat until they were just tender, but slightly shy of being done. I tossed some of them into a a bit of heavy cream with little bits of chopped country ham and lots of black pepper to serve with fettucine one night. 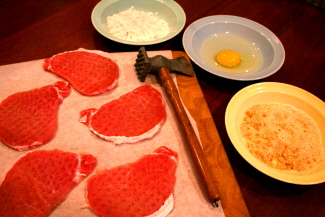 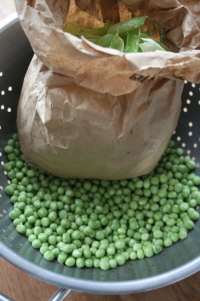 When my daughter arrived for the summer, local asparagus was still in season, so one night we went to the venerable German restaurant in Glover Park, Old Europe. No one ever talks about Old Europe, it seems, but it’s been in business since 1948 and it’s authentic. Yes, the waitresses wear dirndls, but they also tap some of the finest beer (real kegs, wooden ones, at cellar temperature), and, during asparagus season, they offer a vast array of traditional asparagus pairings, the perfectly ripe shoots perfectly cooked (some days they don’t have it if what is delivered isn’t up to their exacting standards). When I found that she loves schnitzel, I bought some thin pork chops and made her Schweineschnitzel. Since grocery-store pork has almost no flavor, I brined it first for about an hour, then rinsed it and patted it dry, then pounded it to an even thinness. I then trimmed off the fat from around the edge of the loin chops, and cut small slits at 2 inch intervals around the edge of the chops so that they would not shrivel, remaining flat in the pan. I then classically “febbed” them — that is, I first dipped them in flour, then beaten egg, the bread crumbs before pan-frying them in butter until they were crispy brown. I served them with slices of lemon. 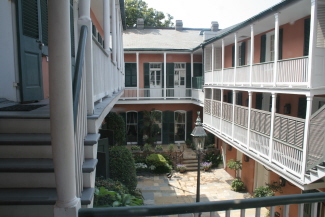 Last weekend I was one of the featured speakers at the Beans + Rice Forum in New Orleans, cosponsered by the Historic New Orleans Collection and Dillard University’s Ray Charles Program.

Chaired by my friend Jessica Harris, the eminent scholar of the foods of the African Diaspora, the Ray Charles Program was initiated with a grant donated by the late singer. Dr. Harris planned the one-day conference (a format I highly recommend) along with the charming John Lawrence, who is the Director of Museum Programs at HNOC. It was held in two of their historic buildings in the French Quarter (one of their courtyards is pictured). It was insanely hot and humid, and there was a palpable mournfulness and anger in the air over the spill (I was asked to write an op-ed piece for the Washington Post which will appear next week. I refused to be paid for writing it, not wanting to profit from others’ misfortunes). Nevertheless, there was the perpetual festiveness of the Crescent City, and my speech, about hoppin’ john (the dish), was very well received (even though — or perhaps because — I had to follow four PhDs)! 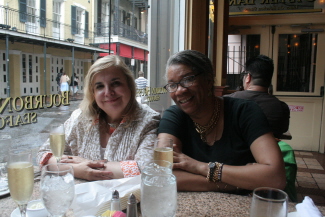 At the end of the conference, but before the speakers’ dinner, I slipped away in a mercifully cooling rain shower with Dr. Harris and the Latin chefs Maricel Presilla and Patricia Wilson (who had also spoken at the forum), to go have some oysters at Dickie Brennan’s Bourbon House, renowned for the quality of its oysters. (Drs. Presilla and Harris are pictured at right.) We were reassured that the oysters were all from Area 9 in Plaquemines, west of the Mississippi. It’s one of two areas that have been reopened temporarily as the Louisiana Department of Health and Hospitals tests Gulf oysters 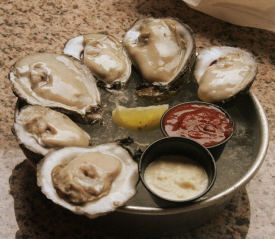 and oyster waters. It was Saturday afternoon, about 5 o’clock. Bourbon House sits squarely on the corner of Iberville and boisterous Bourbon Street, in the heart of the French Quarter. The Beans + Rice Forum, the Creole Tomato Festival and the Louisiana Seafood Festival were going on simultaneously in the Quarter, so there were even more foodies than normal in New Orleans, if that’s imaginable. But Bourbon House wasn’t half full — at happy hour on Saturday — and several lesser known oyster bars we passed were empty.

These oysters at Bourbon House may well be the last Gulf oysters for quite awhile.

My lamentation will appear in the Post next week.

Last week a friend brought me 40 pounds of bing cherries, 3 melons, and 5 pounds of chopped onions. I’ve long maintained that our condiments are really what define the regional dishes of the South. They certainly define my own cooking. No sooner had I canned the cherries and made a “marmalade” with the onions, than my friend Chuck arrived with another 12 pounds of just-picked SOUR CHERRIES, one of my favorite fruits, whose season is unfortunately about one week long. 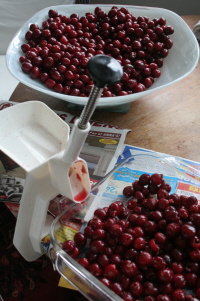 Onions present a preserving problem because they aren’t acidic enough on their own to simply process like many fruits. Most books recommend pressure canning, but I don’t have a pressure cooker and my Lilliputian kitchen can hold not one more item — though I did have to go buy another cherry pitter yesterday (see photo). Many recipes for onion jams and chutney-like preparations call for tons of sugar to make up for the lack of acidity. I followed my instincts and did the following:

Onion Jam to be used as a condiment with vegetables and grilled meats (I served it with butterbeans atop rice last week to Tom Sietsema, the Washington Post restaurant critic, and he loved it): To 5 pounds of chopped onions (18 cups), I added 3 cups sugar and lots of salt. I ground 24 peppercorns, 3 bay leaves, and one plump star anise pod and added the spices along with a bottle of red wine, a pint of vinegar, and 4 cloves of minced garlic. I let it cook until it was nice and thick, put the jam in sterilized jars, added the lids, and processed in a boiling water bath for 20 minutes. 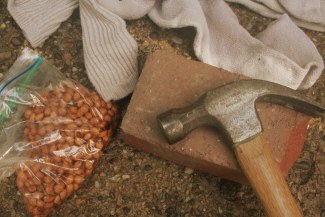 I pitted the sour cherries and added 3/4 cup of sugar for each quart of cherries in a large pot and cooked until the sugar was melted and the cherries were warm through. I added them to hot, sterilized jars and processed the cherries for 15 minutes. They will mostly go for Italian-style tarts. Once again, my blog repeats itself. On this day (June 2, 20008) two years ago, I was writing about exactly the same thing! Last week when I canned the bing cherries, using the same formula (with a bit less sugar since bings are sweeter), I saved the leftover juice (there’s always a little bit more than you need to fill the jars), freezing it, then using the block of sweet cherry ice in my sangria for a Latin American feast we had on Friday night. 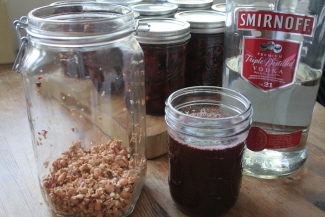 Yesterday, however, I saved the cup of pits from the 24 cups of cherries, put them in an old cotton sock, crushed them with a hammer, and added them to the remaining pint of sweetened cherry juice after it had cooled (both heat and water cause some of the toxins in cherry pits to be released, so you don’t want to extract flavors with either). I also added a pint of vodka and will let the mixture sit for several weeks, then strain it well to make this old-fashioned cordial, which will be almond-scented from the addition of the noyau (pits).