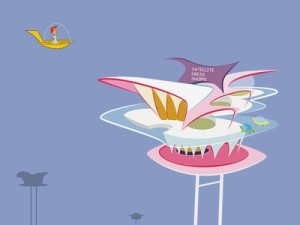 I was crazy for midcentury design before the Jetsons appeared on television in 1962. My father was on the South Carolina State Development Board and, as such, he traveled all over South America and Europe, luring businesses to the then impoverished state in the 50s and early 60s. 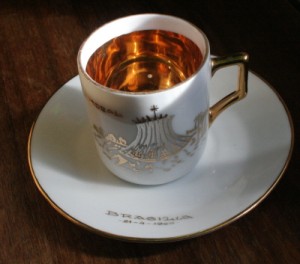 He attended the opening of Brasilia in 1960 and brought home the commemorative demitasse cup designed by Richard Ginori and hand-painted in gold with Oscar Niemeyer’s brilliant crown-of-thorns cathedral. From Denmark, he brought home a Leonard stainless butter dish; from Sweden, a stainless serving platter. I use the classic Norwegian wooden-handled ostehøvel (cheese slicer) daily. He also brought my mother Leonard steel egg cups, as well as bright orange and purple melamine ones by Rosti Mepal of Copenhagen. The spoon is German, as is the egg topper. The hen design is also from the 60s, but a throwback. The Scandinavian designs were much dearer to me, but a friend “borrowed” my Swedish one years ago and I never saw it again. It looked like a torture device. The German word for egg topper is one of many that scared me away from that language: Eierschalensollbruchstellenverursacher. 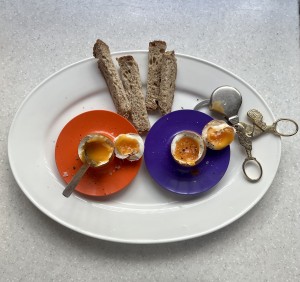 All of these items that once were my mother’s became mine and I use them all the time. Through the years, I have added sputnik chandeliers by Gino Sarfatti (1955 and 1957), outdoor furniture by Maurizio Tempestini (1958), and rare chairs by Claude Courtecuisse (1967) to our collection, though we aren’t really collectors: we use them. We also have a bentwood chair by the Finnish designer Alvar Aalto (1937) and an elegantly crafted set of blonde wood sideboards that are arte moderne (French art deco). I’ve been told they’re worth a fortune but they have traveled the world with us, holding stemware and flatware, serving platters, placemats, and barware. They’ve seen better days, but I can’t imagine my dining room without them.

I have over 100 pieces of Luray Pastels china, which was made from 1938 to 1961. Each piece is dated with the month and year of its manufacture. My mother had a set of it that was her “every day” china, but it had dwindled to a few pieces by the time I went away to college in 1967. She gave me a few pieces and I began searching it out in thrift stores, rarely paying more than 25 cents for an item. I didn’t bring it with me to Cambodia, but am so looking forward to reuniting with it when Mikel retires in 2024. A table set with it is a joyful thing to behold. 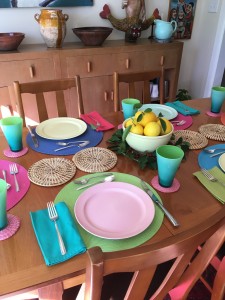 We bought our house in Savannah sight-unseen. We were living in China and we googled “midcentury modern house for sale” and the house was the first that popped up. It was perfect.

I have been known to host 75 people in our home, but what I really like is a dinner table of 6 to 8. Circular tables are the best for conversation, but when I left China and moved to Savannah, I bought an English midcentury blonde set that looks good with the sideboards. Depending on where we end up, I may keep it or not. We have two mahogany demilunes from the 20s that fit together to make a circular table to seat 6 and that’s probably the most guests we’ll be having for a sit-down dinner in retirement. French bureaucracy, new banking rules, and the recent heat wave saw us backing out of our apartment purchase in France at the last minute, so the search is back on. This time, we’ll stick to our rules of: NOT buying, but renting; an elevator if above the first (what we call the second) floor; some outdoor space if only balconies for growing herbs; and an AC if only in the bedroom. The apartment in France failed on all counts. Wherever we end up, the décor will be eclectic, but heavily midcentury. It’s my favorite style.