For our final week in Languedoc we rented an apartment in the city center of Carcassonne, the medieval city that is fairy-tale evocative, perhaps the greatest fortified city in all of Europe. The town of a mere 50,000 people is visited by millions each year. Guide books warn you that it “is overrun with hordes of visitors and tacky gift shops.” Those same books also warn that of the two-tiered city, only the medieval Cité is worth visiting, that the Bastide St-Louis, also known as the Ville Base or Lower City, “has little of  interest.” Frankly, I can’t imagine having stayed up in the old city in November, with no parking, few open restaurants, and fewer sites to visit. That’s where the tacky gift shops are. We walked up to the fascinating old fortress twice, but we stayed in the “new” city on the west bank of the Aude, where there was not only plenty to see, but wonderful markets, shops, parks, and architecture. Our apartment abutted the Saint Martial bastion, a 14th century rampart originally surrounded by a trench (later transformed into a boulevard where, during our week there, both a flea market and a cheesy fair of bump cars, rides, cotton candy, and gambling booths took place). 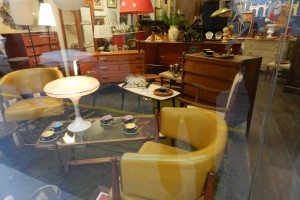 We had excellent food, some of which we prepared ourselves at home. There are some wonderful shops in “new” Carcassonne, including an antique shop that featured midcentury modern furnishings (nearly every piece of which I wanted to bring home), and La Ferme, the excellent food shop I mentioned earlier where I bought the great oyster knife (and butter and local wines and jam and honey and fresh yogurt).

Our first meal there was also our first taste of cassoulet in situ. Said to have originated in nearby Castelnaudary, the dish of beans and confit and sausage was heated three times (per tradition) in the special cassoulet pot in a wood-burning oven at Histoire Gourmande, near our apartment. We drank the local Carsac rouge, which I was shocked to realize was merlot and cab. It went well with the food, but I am always a bit disappointed when tradition is sacrificed to sales. The wine should have been more Rhône-like, not striving to emulate Bordeaux. Though I guess I shouldn’t talk. I have made cassoulet in the States – making my own “Toulouse” sausage, my own duck confit, and cooking the dish in a proper clay casserole. In the photo at right, below, I see that several years ago I served my own with a pricey Bricco Manzoni Langhe Rosso. 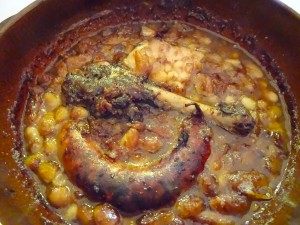 Cassoulet at Histoire Gourmande in Carcassonne 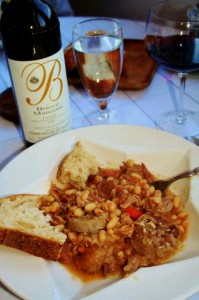 Carcassonne is centrally located on the Canal du Midi and is a great base to explore the region. There seems to be something for everyone, even in the off-season: paleontological museums, rich ecclesiastical and secular architecture, the canal itself with its plane trees and locks,  the beautiful Minervois, Cabardès, and Corbières wine regions, the Massif du Caroux,  the Black Mountains, and the Pays Cathare, with its ancient castle ruins in the Aude. In the stony Malepère region west of the city, valleys lie in splendid full view of the Pyrenees. We took it fairly easy our last week, venturing out on road trips every other day. The 18th Century Les Halles in the center of town, just a few blocks from our apartment, is open on Tuesday, Thursday, and Saturday mornings. We couldn’t resist buying stuffed quail, greens, oysters, sausages, and cheeses there. 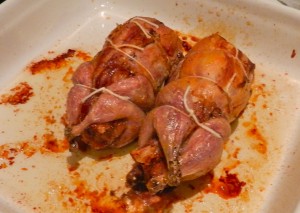 Around the corner from Les Halles, the 18th Century Fountain of Neptune centers the Place Carnot, where locals gather to sip pastis, beer, wine, and coffee in one of the many cafés, bistros, and bars that line the popular square. The town does close up early on weeknights, but we ventured into the one open bar after dark one evening and found it to be as hip as any in the States. And the wine was better.

The fortified city that hovers over the “new” town is definitely worth a visit or two, hordes or not (there were none there when we visited). We had an excellent fish soup in Restaurant L’Ostal des Troubadours, which advertises live music, only “50 meters from the Château Comtal!” It’s indeed somewhat kitschy, but there was a fire in the fireplace, where they cooked sausages and warmed breads, and the service was perfect. I can’t recommend it for the summer months, but it was warm, welcoming, and restorative on a suddenly drizzling November afternoon. 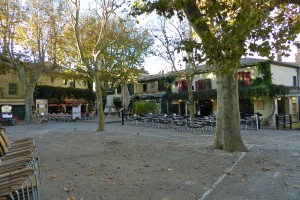 We had La Cité almost to ourselves

En route to Lastours, home of the most famous of the Cathar castles we passed through the Orbiel River Valley, filled with vineyards. Everywhere we saw signs protesting a proposed landfill in Lassac. The protests have been going on for years. The region is noted for its farmers’ and shepherds’ cabins, built in the 19thcentury from stones without cement. They remind me of the trulli of Puglia and can be seen as fancier versions of the ancient dolmen that are found throughout the Mediterranean. 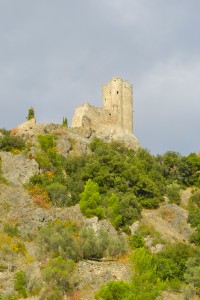 A Cathar castle in Lastours

Having not seen La Cité lit at night, we made reservations our last night at the Hotel des Trois Couronnes, whose restaurant on the fourth floor has an uninterrupted view of the castle. The restaurant was a bit prissy (and pricey) for our taste, but the food was very good and the wine was some of the 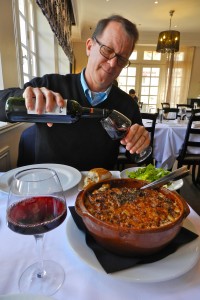 best we had. I say “pricey” but looking at our bill I see that we paid $122 US. The wine would have cost that in the States. And then there’s that incomparable view.

Alas, our three weeks in the Languedoc was nearly at its end. We rented a hotel room near the Toulouse airport to spend the night before our early morning flight home, and left Carcassonne late our last morning. We drove into Castelnaudary and had lunch at the highly recommended (and rightfully so) Hôtel Restaurant du Centre et du Lauragais. Of course we ordered the house cassoulet, made with two confits, one of pork and one of duck. The hotel brags that all their dishes are “refined by a team of young, dynamic, enthusiastic and creative cooks.” The white linens with the bright Languedocien sun shining in were the perfect touches to our last real meal in France. We drank Château de Pennautier Cabardès, another Bordeaux-style wine recommended to us. I kept meaning to stop at the winery, one of the oldest in the region. The wine is the most highly awarded wine in the area. I hear that the Chinese are now buying Languedoc wines as well as Bordeaux. I hope they don’t price us out of the Languedoc as well. If it’s Cabernet Sauvignon, the Chinese will buy it. But that’s another story. Mikel has now returned to China and I’m working on revamping the Hoppin’ John’s ® brand. Stay tuned. 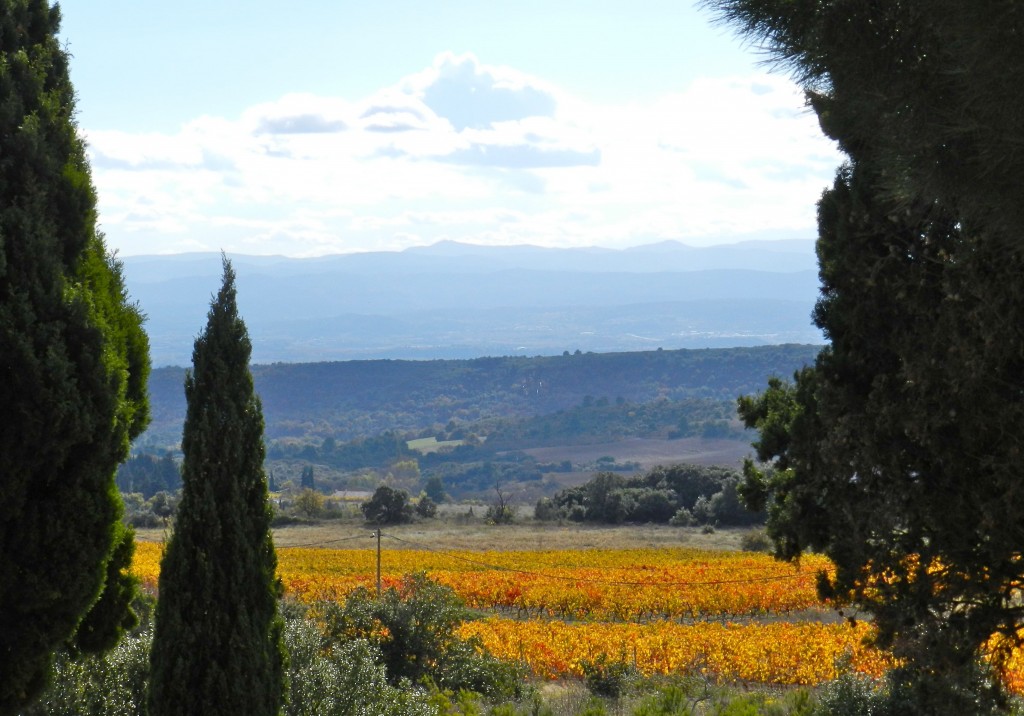