This article appears in the Fall 2012 issue of Gastronomica:

While researching a book devoted to the oft-maligned but secretly adored subject of fried foods, I was drawn to What Mrs. Fisher Knows About Old Southern Cooking.  Abby Fisher was an African American cook of wide renown in Victorian San Francisco. Remarkably, the city’s Women’s Co-operative Printing Office published the collection of her recipes in 1881. The book remained a rare and esoteric piece of American history until it was republished in 1995, with historical notes by the scholar Karen Hess. It was thought to be the first cookbook written by an African American until the tireless culinary historian and archivist Jan Longone made public her lone copy of Malinda Russell’s Domestic Cookbook (1866). Though we know little of either of the authors, their recipes, now published for all to see, highlight the culinary skills of these nineteenth century African American cooking legends.

Among Mrs. Fisher’s recipes, which are, as Hess points out, “all perfectly lovely, and all perfectly feasible in today’s kitchens,”1 elegant breads, perfectly turned roasts, broiled chops, delicate cakes, and hearty stews share the bill with the preserves for which Mrs. Fisher was well-known. The title page of her book declares her twice the winner of medals at the San Francisco Mechanics’ Institute Fair for best “Pickles and Sauces and best assortment of Jellies and  Preserves.”2

She was also an artful fryer, as is evidenced by her “carolas” (crullers), her fried chicken, and her entire chapter of croquettes. “You can make croquettes from any kind of meat you like,” she tells us. “You need not use onions unless you like, but always salt and pepper.” Her lamb croquettes include a little sour pickle, a brightening flavor for strong-tasting lamb. For her liver croquettes, she instructs to “season high.” With a croquette of veal and calves’ brains, she suggests serving an elegant sauce of parsleyed cream. What Mrs. Fisher knew was that with a little leftover meat you can make a meal in minutes.

To be made the same way [as preceding recipes], to wit:   Boil meat rare done, pick all gristle out, grate as much onion in the chopped meat as you like. Take half the quantity of brains that comes in one head (calf or lamb), scald them, pick all the skin from them; mix them with the meat, one-half of a nutmeg, grated, pepper and salt; season high and fry the same as other croquettes. [“Have fat very hot…and …fry quick till brown.”] Make a gravy of cream and pour on vigareets just as going to table. Making gravy: Put sweet cream into a clean vessel, put over steam until hot, add a very little pepper and salt, then chop some fresh parsley fine and sprinkle it over vigareets while on dish. Make oblong cakes. (Italics mine.)3

Mrs. Fisher also called for her lamb, chicken, and oyster croquettes to be oblong in shape, but she added her elegant cream sauce only to the vigareets, whose name Hess was “unable to account for.”4

Hess was also unable to find out much about Mrs. Fisher’s life beyond the remarkable achievements of the formerly enslaved mulatto woman who somehow managed to rear eleven children, find her way across country to San Francisco, and become so renowned a cook that the nine prominent women who championed her work would not only record her recipes from dictation, but also allow their names and addresses to appear after Fisher’s Preface. All, as Hess points out, “about 40 years before women won the right to vote.”5

I propose that that dictation and the Printing Office are the keys to the word vigareets, which is simply a typo. It should read cigareets, a common pronunciation of “cigarettes” at a time when chewing tobacco and cigars were far more common and the hand-rolled smokes of the wild west were oblong, dark, and about the size of, well, croquettes.6 “Cigareets, Whusky, and Wild, Wild Women”  was a popular song by the American cowboy group, The Sons of Pioneers, founded in the 1930s by Roy Rogers when Hollywood westerns were at their height of popularity.7 The films romanced the Wild West of the late 19th century, where — and when — Mrs. Fisher’s book was produced.

More to the point, perhaps, is that the “c” key is next to the “v” key on QWERTY keyboards.

Rotary press was invented in 1843. The first typewriters with QWERTY keyboards came along in 1867 and were put into production by Remington and others in 1873. Linotype and other typesetting machines weren’t marketed until 3 years after the publication of Mrs. Fisher, but the QWERTY keyboard was well-established by the time Mrs. Fisher dictated her recipes, which were surely typed up before going to the typesetter.8 The Women’s Co-Operative Printing Office, which published Mrs. Fisher, was a successful business (see their advertisements, pictured), housed in a huge building, with elevator. 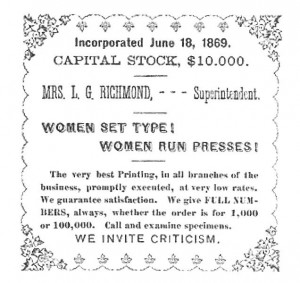 The catalog of the 1998 exhibition “Women in Printing and Publishing in California, 1850-1940” explains that the Civil War had so decimated the male work force that women began to enter trades traditionally practiced only by men. “In San Francisco, which was becoming a center for printing and publishing in the West, women-run printing offices appeared in the 1870s and 1880s…. The most prominent and prolific was The Women’s Co-Operative Printing Union, established in 1868.”9

I imagine that as Mrs. Fisher spoke, in what certainly must have been an accent unfamiliar to those progressive California women, they wrote down what they thought she must be saying. “Not being able to read or write myself,” she admitted in her Preface and Apology, Mrs. Fisher’s crullers became “carolas,” her jambalaya became “jumberlie,” and her succotash, “circuit hash.”  Hess wrote, “Considering that the recipes were dictated, I suppose that [vigareets] could represent the transcription of Mrs. Fisher’s pronunciation of some other word. But what it would have been I cannot say, nor were any of my Southern colleagues able to help me.”10

Hess and I often shared our culinary conundrums and epiphanies with each other. I was one of those southerners who could offer her no help then. I doubt that anyone could, using the classic historical, etymological, and sociological research methodology that Hess was known for. It took text-messaging on a smartphone for me to realize wherein the meaning of vigareets lay. “Does he still smoke” I wrote to a friend whose husband was deathly ill. “No more vigarettes,” she replied.

I’m only sorry Karen’s not here for me to let her know.