Home » Other writing » On Intolerance

I’ve always believed that the real root of all evil is when any one human being thinks that he or she is better than any other. Having been told by Christians my entire life that Christ is “the only answer,” and watching Islamic radicals attack everyone else as “infidels,” I approach all religions with trepidation. Faith demands a suspension of disbelief that defies the reason and logic that anchored my scientist parents’ most profound values. My mother, nevertheless, was a Methodist who believed in their concepts of free will and reason, and of their ministry of fellowship and social service. My father and my siblings and I have tried to let real-world, rational explanations guide our beliefs. I don’t put much faith in folklore and legends.

As a gay man, I am particularly observant when it comes to the holier-than-thou attitude of those who would accuse me of “immorality,” even as they divorce their wives, sleep with their employees of the same sex, and physically and sexually abuse their charges in parochial schools. Marion Barry, the illustrious former Mayor of Washington, DC, had this to say when he was recently the sole DC Council Member who voted against recognizing same-sex marriages from other states:

“I am a politician who is moral.”

It appalls me how folks define morality in terms of what they perceive as the written word of God. Fundamental Christians in particular like to point to the Bible to condemn homosexuality. As Mark Morford, my favorite columnist (even more to my taste than Frank Rich), has written, “Don’t they know the musty ol’ Bible mutters some barely coherent, mistranslated silliness about it in a single word or two written 1,500 years ago in a long dead language by acidic church elders with powermad political agendas and violently repressed libidos who nevertheless wish[ed] to instruct us all how to live and love and screw?”

America, whether Rush Limbaugh or Dick Cheney or Pat Robertson or Ann Coulter or Duke Cunningham likes it or not, is the home of religious freedom. The states and the federal government have no business recognizing any religious institution, marriage included. It does not matter who performs the marriage ceremony; only the legal document, issued by the states, is recognized by the Federal Government. Those documented couplings are, in fact, civil unions that come with hundreds of rights. Why those rights are denied to gay couples who want to codify their relationships is beyond reason. Only a religious opinion could justify the ban on gay civil unions.

For centuries, religious, racial, and tribal intolerance have fueled violence and bloodshed on our planet. Now, perhaps, more so than ever. 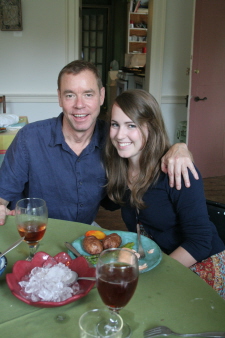 I was recently in northeast

One day during my visit, we drove out near Elberton to see the inspirational Georgia Guidestones. For thirty years they have stood witness to one group’s suggested rules for mankind in a post-apocalyptic world. I had known about them before, and Dana had written a magazine article about them a couple of years ago. A recent article in Wired magazine piqued our interest.

Dana took Ted and Mikel and me (three of her daughter’s “dads”) out to the bucolic setting where the granite slabs rise up, Stonehenge-like, pointing to a better way to live. There’s nothing earth-shattering or heretical about the monuments, and yet vandals have now defaced the stones after nearly 30 years of their silent occupation as a rational survival tool, carved in stone in eight languages, for a post-apocalyptic world. As Randall Sullivan wrote in Wired,

“Supporters (notable among them Yoko Ono) have praised the messages as a stirring call to rational thinking, akin to Thomas Paine’s The Age of Reason. Opponents have attacked them as the Ten Commandments of the Antichrist.” 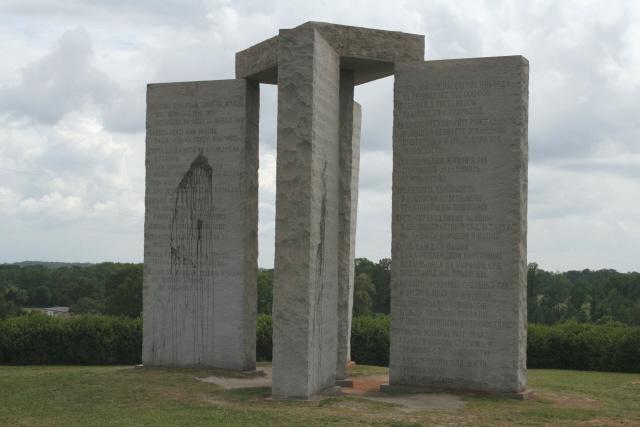 The monument is an engineering marvel of brilliant astronomical precision. On either the  equinox or the solstice, if you stand on the west side of the opening known as the mail slot, you will see the sun rise on the horizon. On the south side, there is a hole through which you can locate Polaris, the North Star (see photo, below). At high noon, the sun pours in through a hole in the capstone, illuminating the center of the central monolith while pointing to the day of the year. 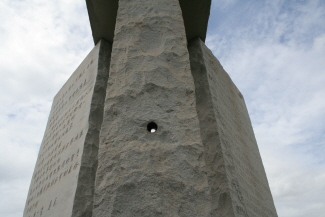 The stones were erected in 1980, with translations of the messages etched in the massive granite slabs in English, Spanish, Russian, Chinese, Arabic, Hebrew, Hindi, and Swahili. There are also inscriptions carved in dead languages, including Egyptian hieroglyphics, classical Greek, Sanskrit, and Babylonian cuneiform.

Interestingly, the only slabs not defaced were those in Arabic and Hebrew. I can understand that the

I wonder how on earth he thinks the long-standing Republican stronghold on American politics in any way has helped his financial situation, let alone his freedom of expression. Don’t get me wrong: I have friends who are Republicans, Democrats, Christians, Jews, Buddhists, Hindus, Marxists, and Libertarians. I don’t think I personally know any Muslims, but most people I know don’t wear their religion or their politics on their sleeves any more than I wear my sexuality.

Here are some shots of the vandalism. 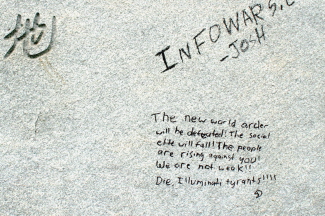 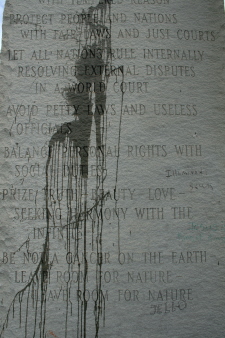 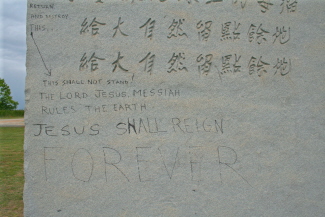 I came home to the California Supreme Court’s upholding of Proposition 8. And it got me thinking.

All of my siblings are divorced. Both of my partner’s brothers divorced, as did his mother. My nephew divorced. One of my sister’s husbands (she was married twice) simply left her ten years ago. Poof! Gone! He hadn’t paid the mortgage and she lost yet another house. Divorcing him has been a nightmare, an impossibility. And yet, were she to drop dead tomorrow, he would get 100% of her social security benefits (or her working pension, whichever is greater), tax-free, because, legally, they are still married. On the other hand,  should my partner of 16 years, the man I love and cherish and with whom I’ve never even argued, drop dead tomorrow, I would not only not get his social security or pension, I would have to pay taxes on anything that I inherited that we do not own jointly.

I’ve had it with the intolerance and discrimination.

George Washington and Thomas Jefferson were adamant that religion be offered no quarters within the law of the new nation. The only mention of God in the original constitution is there merely as part of the date: “in the year of our Lord 1787.” The First Amendment, guaranteeing freedom of belief and speech, mentions no specific religion, organized or not. And Washington, in his first year of office, wrote the Hebrew Congregation of Newport, Rhode Island, letting them know in no uncertain words that “the government of the United States, which gives to bigotry no sanction, to persecution no assistance, requires only that they who live under its protection should demean themselves as good citizens, in giving it on all occasions their effectual support.”

When the so-called religious right says that our nation is Christian or that it was founded on Christian principles, they are rewriting history, for neither Washington nor Jefferson were Christians and they warned the young nation of the perils inherent in mixing religion and politics.

Thomas Paine wrote, “Of all the tyrannies that affect mankind, tyranny in religion is the worst.”

In a letter to his father, Benjamin Franklin confessed, “I think vital religion has always suffered when orthodoxy is more regarded than virtue.”

In a letter to

And, in James Madison on Religious Liberty, the fourth President wrote, “”It may not be easy, in every possible case, to trace the line of separation between the rights of religion and the Civil authority with such distinctness as to avoid collisions and doubts on unessential points.  The tendency to usurpation on one side or the other, or to a corrupting coalition or alliance between them, will be best guarded against by an entire abstinence of the Government from interference in any way whatsoever, beyond the necessity of preserving public order, and protecting each sect against trespasses on its legal rights by others.”

I would suggest that he take a harder look at the first paragraph of the Declaration of Independence, which has remained unchanged for 233 years:

When in the Course of human events, it becomes necessary for one people to dissolve the political bands which have connected them with another, and to assume among the powers of the earth, the separate and equal station to which the Laws of Nature and of Nature’s God entitle them, a decent respect to the opinions of mankind requires that they should declare the causes which impel them to the separation.

When I am attacked as immoral because of my sexual orientation, I think to myself as an American, okay, even the bigot has a right to think whatever he wants, believe whatever he wants, and say whatever he wants. But to legally deny me basic rights because of the tyranny of the majority is to fly in the face of the spirit of the Bill of Rights, which not only guarantees his freedom of religion and speech, but also protects the law from his religious input.

When I am attacked for my “choice” of “lifestyle,” I am appalled at the ignorance of those who would believe that I actually chose to be gay in this political, social, and religious environment of intolerance. I do not believe that a person can choose his or her sexual orientation, but choice shouldn’t matter to those of us who believe that our nation was founded on the principles of the Declaration of Independence. Indeed, I do choose to love Mikel and to “have and to hold” him. What difference can that possibly make to anyone else?

I was taught to live and let live and to do unto others as I would have them do unto me.

When the Republicans started demonizing the word “liberal,” back in the 50s (and then again under Nixon, and then, worse, under Reagan),

My response is often, “We aren’t disagreeing if you can’t refute my facts.”

But they “know” what they believe is “right” because they read and listen to conservative media that offer no voice to so-called “liberal” thinkers. (Why is it that the “liberal” media such as The New York Times, The Washington Post, and National Public Radio all offer conservative voices a platform but the “conservative” media offer no liberal ones?)

I offer a definition of the word “liberal” from The Merriam Webster online dictionary:

1: a: of, relating to, or based on the liberal arts <liberal education> b: archaic : of or befitting a man of free birth

2: a: marked by generosity : openhanded <a liberal giver> b: given or provided in a generous and openhanded way <a liberal meal> c: ample, full

4: not literal or strict : loose <a liberal translation>

5: broad-minded ; especially : not bound by authoritarianism, orthodoxy, or traditional forms

6 a: of, favoring, or based upon the principles of liberalism b: capitalized : of or constituting a political party advocating or associated with the principles of political liberalism ; especially : of or constituting a political party in the United Kingdom associated with ideals of individual especially economic freedom, greater individual participation in government, and constitutional, political, and administrative reforms designed to secure these objectives

Please note that the third definition is obsolete.

And please join us for the National March for Equality here in Washington on October 11.