“When Rickey was upset, he almost always made cheese straws. They were one of the few things he had ever learned to cook, and making them seemed to comfort him.”
-from Liquor: A Novel, by Poppy Z. Brite1

Of the many foods that I have made and served to my guests over the years, there is none that folks seem to love more than the old southern cocktail party standby, cheese straws. Since cheese has always been imported into the hot and humid South, cooking it in cracker form has long been a southern way of “preserving” the cheese, or at least the cheese flavor. There are some relatively new artisan and farmstead cheesemakers in the area today (The Southern Cheesemakers Guild lists about two dozen members on its website), but they are the exception, not the rule.

Outside the South, cheese straws just don’t seem to be a part of the vernacular. You find them here and there, but only in the South do they seem so firmly entrenched as truly regional fare, like boiled peanuts or grits. The late Bill Neal, my dear friend who spearheaded the revival of traditional southern cooking, wrote that cheese straws came from England,2 but my research doesn‘t exactly bear that out. The British have adopted them, and they occasionally appear with cocktails in the English-speaking islands of the Caribbean, but I’m reasonably sure that they are a fairly recent – meaning not much more than a century old, American culinary phenomenon, even if the first printed recipe I have found is in a British cookbook (by the notoriously plagiarizing Mrs. Beeton). If they are truly British, why do my friends in London ask me to bring them with me when I visit?
[Note: In January 2008, I went to visit British friends in Barbados. Of course they asked me to make cheese straws! Never mind that their kitchen had no food processor or rolling pin. Here I am making them, rolling them out with a rum punch bottle!]

I empathized with Rickey, one of the protagonists in Poppy Brite’s foodie novel, quoted above. He and his partners constantly struggle in their efforts to open a restaurant with a menu based entirely on booze. A dainty treat, so easy to make, must have truly comforted him in the alcoholic madness that Brite conjures as post-Katrina New Orleans.

I think that cheese straws became so wildly popular in the South because they would keep (most southern homes didn’t have air conditioners until the late 1960s), because they’re good, and, possibly most importantly, because they’re so good with drinks. And drink we do! How could we not in this godawful heat?! That would also explain their recent popularity in the Caribbean, though few recipes featuring any cheese at all appear in cookbooks from the islands prior to the 1980s. Perhaps the recipe went to Barbados with southerners vacationing there in the twentieth century; more than likely, it arrived with cruise ships. Perhaps it traveled to England with British vacationers on Barbados. However they arrived there, by 2005, cheese straws were being proclaimed the “King of Canapés” in a poll of 40 top chefs, food experts and critics conducted by Waitrose Foods, the upscale British supermarket, in 2005. It scored a score of nine out of 10 in a survey that judged cocktail fare by social rating, taste, and “wow factor”:
Maligned by some as dull, the cheese straw is, in fact, and quite correctly, pre-eminent among canapés. Its glowing, golden complexion can entice and it brings with it a message of comfort and wholeness. It rises above the one-bite rule and can be waved around and drive home important conversational points. It’s solid enough to provide a good foil to alcohol, and its only drawback is its threat of crumbs falling to the carpet. But hey, as long as it’s not your house, who cares?27
There is also a prevailing nostalgia for the foods that our mothers and grandmothers made, even if it’s Kool-Aid.28 Nowadays when we talk about the “old days,” though, we usually mean post-World War II, not pre- (I’m 58, born in 1949, well after the War). The late forties, fifties, and the sixties were times of great prosperity (and cocktail parties!) in America. Recipes for canapés flourished in the old port cities of New Orleans, Charleston, Mobile, and Savannah, each well-known as drinking towns from their beginnings.
The Junior League of Charleston’s Charleston Receipts, first published in 1950, is the oldest, continuously published fundraiser cookbook in America. It includes, in its second chapter, “Canapés,” a perfectly acceptable recipe (though I usually add some red pepper flakes as well as the finely ground cayenne called for). Like The Picayune Creole Cook Book, Charleston Receipts includes an entire “Beverages” chapter – the first! – composed of mostly highly potent punches to serve dozens.29 I’m sure that cheese straws were already a tradition in the lowcountry prior to Charleston Receipts, although they don’t appear in Two Hundred Years of Charleston Cooking, published in 1930, which was assembled under the watchful eye of some visiting Yankees who certainly knew from cocktail parties, as they say. I remind myself, however, as the late scholar Karen Hess often proclaimed, that “The lag between practice and printed word is one of the most frustrating aspects of work in the discipline of culinary history.”30 And so I keep looking. Since beginning this article, in fact, I have found recipes nearly identical to the one in Charleston Receipts in several fundraiser cookbooks published in South Carolina in 1948, as well as in The Savannah Cookbook, from 1933.31
I have published some very good recipes for cheese straws that will cook up perfectly every time, but, truth be told, I like to tinker with cheese straws more than just about anything that I cook. Sometimes I use that egg yolk and sometimes I don’t. I’ve tried flavoring them with anchovies, red pepper paste (that I buy in a squeeze tube), tuong ot toi (Vietnamese chile paste with garlic), and a variety of cheeses. I used to insist on unbleached flour and very sharp, authentic Cheddar. I also used to mix the dough by hand, and roll them out once. Because there’s no liquid in the dough, though, I’ve found that the more it is worked — that is, the more times it is folded over itself, like pastry dough – the flakier the cheese straws will be. But you should use a soft southern flour such as White Lily if you can find it, because it has less gluten (the tough molecules that stretch and hold the air in yeast breads, giving them substance): you want your straws to be flaky and light. The thinner you roll them, the flakier as well.
I assembled ten typical recipes from a variety of sources both old and new, then figured the average ingredients: 3 cups of grated cheese, 1½ to 2 cups of flour, 7 tablespoons of butter, 1 egg yolk, and salt and cayenne to taste (from ⅛ to 1 teaspoon of each). When all is said and done, recipes vary little.
One thing’s for sure: the more flavorful the cheese and seasoning, the better the straws. Shirley King (1931-2005), the great chef and food writer, spiced hers with anchovies and advised, “If you like a sharp-tasting cheese straw, use Gruyère.”32 Lately I’ve been making them with blue cheese, to much praise. The crackers will have a slightly bluish tint to them. Put them out with the beverage of your choice and watch them disappear! 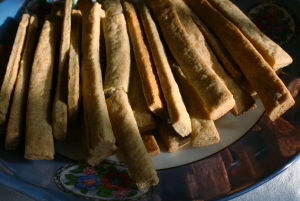 BLUE CHEESE STRAWS
Use a fairly dry blue cheese, not a creamy one, in this recipe. There are some flavorful ones made in America these days. You can even use the already crumbled blue cheese found in every grocer’s dairy case. Believe me, I’ve used it at friends’ beach houses and folks have raved.
2 oz (1/2 stick) unsalted butter
1/2 tsp salt, plus more for garnish
1/2 lb. blue cheese, crumbled (see headnote)
1/4 tsp cayenne, plus more for garnish
1 cup all purpose (preferably soft southern) flour, plus more for dusting
1 egg yolk (optional)
Preheat the oven to 350º F.
Put all of the ingredients except the egg yolk in the work bowl of a food processor and blend with the steel blade until the mixture comes together in a ball. If the cheese is very dry, you may need to add the egg yolk to make the mixture form a ball. But let the processor do its thing. It will probably make the ball without the yolk.
Divide the dough in half, dust a counter and rolling pin with flour, and roll the first half of the dough out to 1/4″ thickness, in a rectangular shape. Keep folding the dough over and rolling it out until you have a perfect rectangle, about 5″by 9″. Place any trimmings with the remaining half of dough. Using a long knife, score the rectangle into twenty crackers, each about 1/2″ wide and 4-1/2″ long. Carefully lift the straws up, using a metal spatula if necessary, and place them close together, but not touching, on a heavy baking sheet. Roll out the remaining dough and cut similarly. Sprinkle with salt and/or cayenne, if desired. Bake the straws for 20 to 25 minutes, or until they just begin to brown. Lift them up onto racks to cool. When perfectly cool, remove them to airtight tins to store. They make be frozen for later use.
Makes 3 to 4 dozen.