Names have always fascinated me. In the small southern town where I grew up, there were some real doozies: Mellicue Metts, Pot Fomby, and Algie Melfi Grubbs come to mind. I’ve known two men named Pinky. One of their fathers is known as Yum. Our little town was settled by Protestants from Germany and Switzerland early in the 18th century and many of the families are still there: Ziegler, Shuler, Geiger (pronounced both GUY-gher and GHEE-gher), Wolfe, Hartzog, Wannamaker, and Hoover (the latter anglicized, as were many – in this case, from Huber). My favorite teacher I ever had was in the sixth grade. Her name was Una Belle Hoover; her maiden name was Cwinn (pronounced Kwinn).

I have answered to many names myself. John, of course, but never Johnny, except by one friend’s mother whom I loved so much that I let her call me that, even though I never liked it. My sister Nancy, whom we called Snooker, called me Johann Pawtucket. I lived with her briefly one year as her infant son was learning to talk and he began calling me Bubba, which stuck. My father thereafter called me Bub, as did my friends who were having children at the time. Most children I know born after 1979 call me Bubba, as do their parents.

My sister Susan never has. Her son was born in 1966 and he has always called me Uncle John, as do his four boys. We call his mother both Sue and Pooh. And Susita. When my younger brother was in kindergarten, everyone called him The General. My mother was Rebecca but most of her friends called her Becky. Her parents and brother called her Sis. My grandfather, uncle, and cousin were all Edmund Duke Martin (Senior, Junior and the Third). Grandpa was Ed, my uncle was Bud, and my cousin was Duke, which Sue named her son. Dukes is a common surname in Orangeburg County, where we grew up, but it was probably changed from the German, Hartzog (meaning duke), which also became Herzog.

In college, friends began calling me J.T. I’d say at least half of the people I know call me that, though a few friends always call me by both names, John Taylor. When I began writing for The New York Times there were several John Taylors contributing, so I was advised to use all three of my names. You know that folks don’t know me if they call me John Martin. I will courteously reply, but I have never been known that way. Those folks are likely to be the ones who also tell me that they loved my restaurant in Charleston, but I have never had a restaurant. Many people, especially in the food world, call me Hoppin’ John. For a while I signed my letters Maverick. That was also the model of Ford I owned. Kate Pierson of the B-52s called her old Ford Falcon Betty Ford. My husband calls me Brerzy. (Don’t ask.)

My brother Mike calls me Jean Martin (French pronunciation). When I lived in Italy, all my friends pronounced my name as Joan. I told them all to simply say the Italian name Gian and it would be correct, but they always said Joan. Both in Genoa and in Paris, friends spelled my name Jonh, like Phnom Penh. I’ve never quite understood the attempts to romanize the Khmer language. Ch is J. Chh is CH. Ph is P.

There were only a couple of Jewish families in Orangeburg and one girl who was my age, when told by a teacher one year that she had to participate in a Christmas pageant, explained that she declined because of her beliefs. She was told “You can be the donkey.” We called her Donkey for years afterwards. I never thought of it as mocking or mean then, but in retrospect it all seems so wrong to me now. One girl in high school wore so much pancake makeup we called her Biscuit. Behind her back. I’m sure I’ve been called lots of names out of my earshot as well.

There were plenty of women and girls with two names: Mary Katharine, Rosa Helen (whose sister was Boo), Beth Lee, Mary Elizabeth (Mary Lib), Betty Ann, Nancy Jo, and Mary Ashley. There were guys with two names as well. Jim Tom Oliver’s sister was named Machen (pronounced Matchen). There were lots of nicknames and initials that were the only names used: Liboo, B.D., Spud, and Ginger. I knew two men named Gus; both made names for themselves. Gus Browning, called Mr. Radio, was the first inductee in the DX Hall of Fame. Like my father, he was an amateur radio operator (“ham radio”). DX stands for Distant – two-way radio contact from distant stations. Born in 1904, he traveled the world over, communicating from wherever he was. The first time I heard about the Seychelles Islands was when Daddy talked to Gus via radio when he was there. The islands were named after Jean Moreau de Séchelles, Louis XV’s Minister of Finance, but it would be years before I learned that they weren’t the Sea Shells. My father’s call letters were K4CUH (“Carolina’s Ugliest Ham”). I don’t know if Mr. Browning’s name was an abbreviation, but the other Gus I knew was Mary Speth’s older brother, James Gustave, the world-renowned environmental lawyer and advocate. The Speths are all smart. Gus graduated summa cum laude from Yale, went to Oxford as a Rhodes scholar, went to Yale Law School, and clerked for Supreme Court Justice Hugo Black. Their sister Amelia we all called Memi.

There were the usual diminutives – Bob for Robert, Bill for William, Dick for Richard, and Meg, Peggy, and Marge for Margaret. But I knew a man named Fred whom everyone called Tony and a Charles known as Pete.

Many of the names you just don’t hear any more. My mother played bridge with Serena, Verna, Gloria, Anna Lou, Willa, and Esther. Her best friend was Cassandra; her husband was Hinchie. I knew Sabie, Kayne, Eva, Alta, Mallory, Keys, Dallon, Leah, Clara, Mae, Leona, Heidi, and Wilhelmina. The last six were Black. Orangeburg was decidedly segregated, but Leah, Clara, and Mae were the maids at some friends’ houses and they were as much a part of the families as anyone. It was such a tight-knit community that it was difficult to get away with being bad. If I were being a pain at a friend’s house, not only could their parents discipline me, but so could the maid. More than once my mother was called by the domestic help to say “Mrs. Taylor, I’m sending John home. He’s acting up.” Leona, Heidi, and Wilhelmina were among the courageous half dozen Black students who were the first to integrate our class of two hundred. To this day I admire their mettle and steadfastness amidst the animosity.

Black names began to become ever more creative, especially after Alex Haley’s Roots. In the early 90s I was in the grocery store in Charleston and the salesclerk’s name tag read Treemonisha. I had never heard the name before and I asked her how to pronounce it. “Just like it reads: Tree Mo Nee Sha.” Little did I know that it was the name of an opera written by Scott Joplin in 1911. But little did any of us know about Black history. I am careful now to ask about the origin of names I don’t know. Many African American names have been around since long before emancipation.

Across the street from us, there were the Johnsons: Haskell, Sybil, and Drake. Next door, Hugo and Helen. There were a lot of Helens and Harriets, but I don’t hear those names much anymore. Down the street, Tillie and Cherry (whom everyone called Chum). There was Macon and there was Mason, who taught chemistry. Sudie taught French. Across the street in another direction (we lived in a corner house) lived Mildred Mutch. She was an amazing woman whom we called Skip. She had taught jiu-jitsu during World War II, taught horseback riding and swimming lessons, and helped run the family bakery. There was the inevitable Buster Cherry and Dusty Rhodes. And in Charleston there’s a proctologist named Infinger and the artist Shepard Fairey’s father is named Strait. I kid you not. He was both of my sisters’ physician.

Sue’s friend Ivy Herrington died young. His sister Kymiesha (sp?) we called Kye. She had the most beautiful red hair. See if you can pick me out in her birthday party photo I’ve included. No relation to my husband Mikel – pronounced like Michael – Herrington. We could never get a straight answer from his mother about the spelling. And talk about old-fashioned names: hers was Dixie. His great Aunt Dick Hyman lived with them. His sister is named Questria. 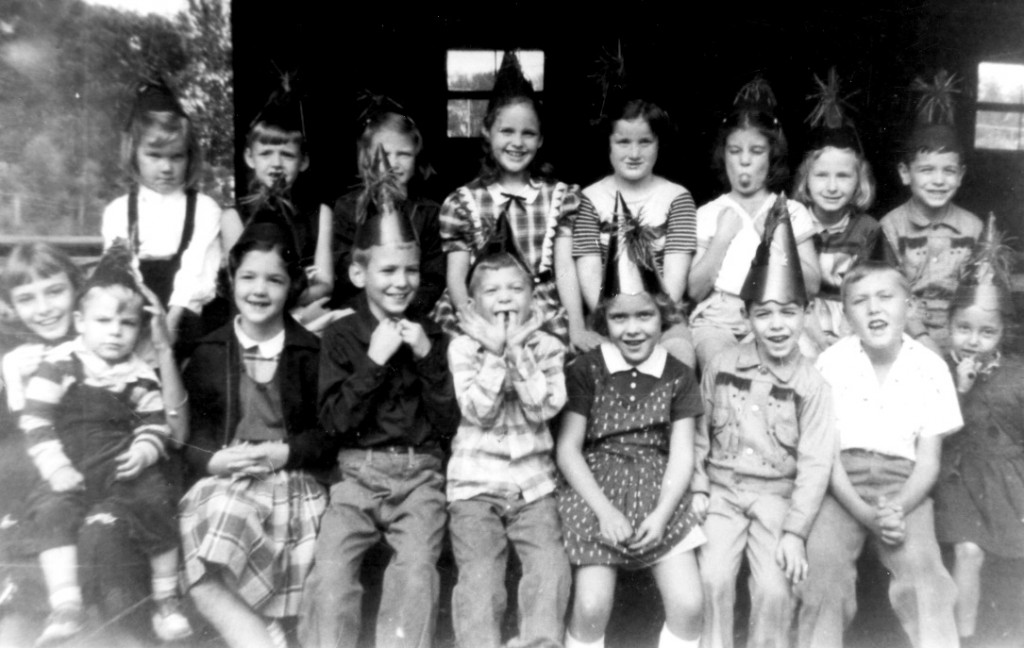 Questria’s oldest daughter Jennifer had a son last year and named him Zollie, an old family name on her husband’s side. We like to refer to last year as the year of the Zs instead of remembering the pandemic. Our friends Lisa and Matt adopted a Black baby and named her after Zora Neale Hurston. Our Bulgarian friends Mila and Vasko had a baby boy last year and named him Zoran – the male form of Zora, meaning dawn, when he came into this crazy world. Vasko is a familiar form of Vasil; our friend Grigor is called Grisha; Atanas is Nasko; and Konstantin is Kosyo. But I’ll stick to American names because even in English it gets complicated. We find most Irish spellings odd – think Siobhan or Saoirse – and people stumble on even common names such as Worchestershire.

Like New Orleans, Charleston, where I lived for over twenty years, is well-known for the peculiar pronunciations of its proper names. There’s even a book called Correct Mispronunciations of South Carolina Names, written by Claude and Irene Neuffer (pronounced Nī fer). My next-door neighbor for several years was Elizabeth (Libby) Huger. By the middle of the 18th Century, more than half of the white residents in South Carolina, which had a Black majority, were French Huguenots. Charleston names have undergone different spellings and pronunciations over the past 300 years. Huger is said just like the letters, U.G. Gourdin is GuhDINE. Lesesne is LuhSANE. Vanderhorst is VAN DROSS. Cooper is more at CUPPuh than COOPer.

In Charleston I got to know Brian Seabrook, a young man who performed in drag as Africa. I used to go to his parents’ house with him on Friday nights, where his father would fry fish as his mother sewed Africa’s gowns. That was 40 years ago. My nephew Duke, a teenager at the time, was the first person I heard use the pronoun “they” to refer to one person. The equality movement and RuPaul have made drag a huge international phenomenon. I saw RuPaul perform with The Now Explosion and Wee Wee Pole in the late 70s. I have also witnessed a sea change in LGBTQ rights and visibility. Some friends’ daughter India is now their son Ike. Marshall is Marsha. And, here in Phnom Penh, one transitioning acquaintance has chosen to be called, simply, Boy. That may be the most appropriate name I have ever heard.