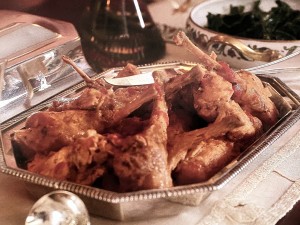 The rabbit is served here in a game dish made by Paul Storr in London in 1799. Photo by Kelly Bugden for Hoppin’ John’s Charleston, Beaufort & Savannah: Dining at Home in the Lowcountry.

Our friend Ben is in quarantine after his Home Leave, so I took him some cookies and pasta sauces. He’s lived in Italy, where both coniglio and lepre – rabbit and hare – are consumed with abandon, so one of the sauces was a tomatoey rabbit sauce that he could easily reheat and serve with pasta.

I went back through my blog looking for rabbit dishes and found a dozen or more, including this one, which appeared as “Gibelotte” on the blog and as “Rabbit Braised in White Wine with Tomatoes” in my book, Hoppin’ John’s Charleston, Beaufort & Savannah: Dining at Home in the Lowcountry (Clarkson Potter, 1997).

Gibelotte is a famous “dirty dish” from France. Richard Olney, the great writer about French food, wrote: “Gibelotte is another of those magic words whose mere utterance causes saliva to run in a French mouth…. Today it means only rabbit and white wine stew. It is thought of as vulgar, popular, unrefined (in this context, all considered to be positive virtues): un plat canaille.*  And, as if duty-bound to respect the dish’s connate vulgarity, most cooks determinedly prepare it in the sloppiest possible manner, some cookbooks, moreover, specifying that it should be boiled rather than simmered….”

*[I don’t really know how to translate this. Plat is "dish," of course, but canaille means vulgar in a perverse way, as of a rascal. That is, the dish should be too vulgar to be liked, like a charming, however common, thief. It's more at the "dirty" of "dirty rotten scoundrel."]

I like to serve the dish with potato croquettes and turnip greens (see photos), but the leftovers can be repurposed into a luscious sauce for pasta. Revisiting those old blog posts of mine, I notice changes that I have made in the preparation of this dish for several reasons as explained in the notes indicated by asterisks. Some of the changes reflect how I cook today; others have more to do with the fact that I was writing the recipe after cooking the dish for a photo shoot in a private home where I only had a few hours to both prepare the foods and have them photographed in situ. 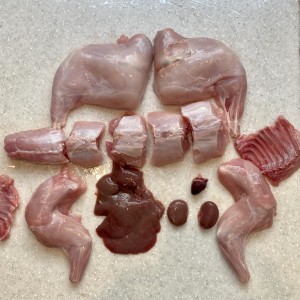 2 cups peeled and chopped vine-ripened tomatoes or one 14-1/2-ounce can Italian tomatoes, chopped, with their juice

Season the rabbits with salt and pepper.** Mix the herbs and flour together in a shallow bowl and dredge the rabbit in it, shaking off any excess. Heat the oil in a Dutch oven over medium-high heat and brown the rabbit pieces all over, removing them from the pot as they are done. Set the rabbit aside. 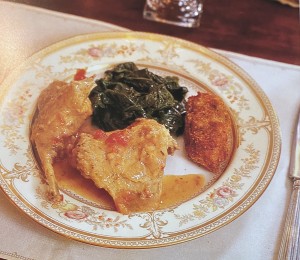 The plated rabbit as it appeared in the book in 1997. Photo by Kelly Bugden.

Add the onions and sauté until they become transparent, 5 to 10 minutes. Add the tomatoes and cook until thejuice has evaporated, another 5 to 10 minutes. Add the stock and the wine and bring to a boil, scraping up any pieces that may have stuck to the bottom of the pan. Add the rabbit, lower the heat, and simmer, covered, until tender, about 1 hour. Serve immediately, napping the rabbit pieces with the sauce. If the sauce isn’t thick, remove the pieces to a serving platter and reduce over high heat until it reaches the desired consistency. Pour over the rabbit or serve in a gravy boat.

**The rabbits I get here in Cambodia are from Australia and weigh a kilo, so I only used one this time around. I broke the rabbit down, trimming the neck and belly flaps and making a stock with the trimmings. The large saddle I cut into five pieces (see photo). With the organ meats I made a mousse: sprinkled the liver and heart and kidneys with a tiny bit of salt and cayenne, sautéed them in butter, then added to the blender with a bit of cream and cognac. Delicious! I brined the rabbit pieces for about 3 hours (1/4 cup salt per quart of water).

***I did not salt because of brining. I stopped using black pepper before cooking (except whole corns in stock) years ago because the volatile oils dissipate nearly immediately after grinding and even more quickly when heated.

****I used olive oil and butter 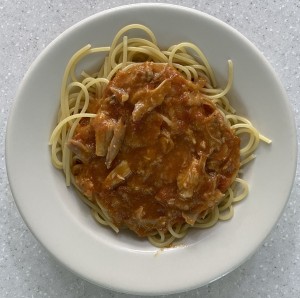 The leftovers made heavenly.

There was lots left over after my husband and I each had a hind leg and saddle section, so I pulled all the meat from the bones, made more stock with the cracked bones, added the stock to the sauce and reduced again. I added another peeled and pureed tomato I had that was going soft. I may have added a dollop of V8 juice, my secret weapon. And I probably also stirred in another tab of butter when folding in the shredded rabbit. Served with spaghetti, it was a divine second coming of the rabbit.