BANANAS and THE EASIEST DESSERT

I have begun writing a short food column for the US Embassy weekly newsletter here. It’s mostly reworked blog articles or Facebook posts that I already had on file, but I try to customize it for cooking here in Cambodia’s capital. A shortened version of this post will appear in the newsletter some time in the future — Scott, the editor, already has a cache of them to draw from.  My dear friend Dana Downs turned me on to this insanely simple recipe which everyone should know. The recipe has been around for awhile but I somehow never heard of it. You only need one ingredient: bananas! 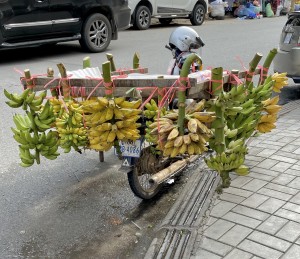 A typical street vendor of bananas in Phnom Penh.

Bananas (“chek” in phonetic Khmer, though the pronunciation is more at “jay”) have a complicated history. The monoculture of the Gros Michel (“Big Mike”) variety, which is a Southeast Asian cultivar known as Chek Amboung in Khmer, had been practiced throughout the tropics, particularly in the Caribbean, since the beginning of the 19th Century. Susceptible to a fungus, the Amboung was replaced by the Cavendish (think Chiquita) on most plantations in the 50s and 60s. Half of the world’s bananas are a type of Cavendish; there are two basic subgroups: yellow and small yellow. A new strain of the Fusarium fungus threatens the world’s crops.

Here in Cambodia, though, hundreds of the 1000 varieties of bananas that exist are grown on family plots where disease resistant heirloom plants managed to survive not only the devastating disease that destroyed the plantations in the 60s but also the horrors of the Khmer Rouge. Indigenous to the region, you find them in every Khmer province, sometimes growing wild. In supermarkets here, you’re likely to find only Cavendish types: a big yellow sweet banana and a small one. But there are chek of many colors, shapes, and degrees of sweetness available from street vendors and in the wet markets. Plantains and cooking bananas are members of the same genus, but they, too, are widely varied. Here, there are four or five main types of bananas that are grown, but there are regional variations as well. I had a small yellow banana in Siem Reap whose flesh was almost orange. It was not overly sweet but had a remarkable fragrance. I’ve yet to find it again.

Banana blossoms — tror yong chek — are favored as well, most famously as the featured ingredient in a Khmer salad with chicken and fresh herbs. But properly preparing banana blossoms is a labor of love, so I leave it to the experts! When the “trees” (bananas are actually perennial herbaceous plants that replace themselves without seed, bulb, or rhizome) stop producing, the trunks are fed to hogs or used for makeshift rafts. The mother plant that produces a bunch of bananas will die, but the shoots or suckers that spring up around it (they’re called “pups”) will continue to produce for about six years. Leaves are used to wrap foods for steaming or grilling, and the dried leaves are used for weaving baskets and hats. If you live in the tropics or subtropics, bananas are fairly easy to grow as long as they have rich soil, plenty of water, and are protected from high winds. They need 9 to 12 months to produce a bunch of bananas (called a “hand” — individual bananas are called “fingers”). I grew them in both Charleston and Savannah with great success.

Bananas in my backyard in Savannah; October, 2017. 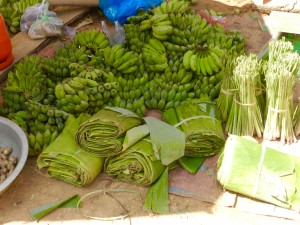 Bananas and leaves for sale at the market in Chhlong on the Mekong, 130 miles north of Phnom Penh (but a 4-hour drive!).

I’ve used sign language and some very primitive Khmer with street vendors to ask if their wares are to be eaten out of hand or if they are for Num Ansorm (rice cake), Chien (frying), Ang (roasting), or Dot (grilling). I’ve had delicious Chek Chien Pises (“Special Fried Banana”) from street vendors and some less-than-tasty grilled ones. I’ve never really sure what I’m getting. There are only two of us at home and most places here make you buy huge bunches. It used to bother me, and I’d throw the blackened bananas in the freezer and eventually make yet another batch of banana bread. But then Dana casually mentioned to me that she simply throws frozen bananas in the food processor to make banana “ice cream”!

It’s an amazing recipe, if you can call it that: Cut up ripe bananas and put them in a container in the freezer. Drop the frozen banana pieces in the food processor and process until you have an ice-cream-like mixture. You’ll probably have to scrape down the bowl a few times, but keep processing until you get the right consistency. You can add some milk or cream if you want. For the batch in the photo, I added about a tablespoon of cream, then folded in some black walnuts and some raisins I soaked first in rum. I guess folks who make smoothies have known about doing this for years. I’m so glad to know about it now. The texture really is like ice cream.

You can add vanilla extract or cinnamon or a little of the liquor of your choice. I take a cup of sugar and a half cup of water and boil with as much grated ginger as it will hold to make a ginger syrup, which is also a great addition (and good in cocktails as well). I’ve seen recipes online that have peanut butter or Nutella added. Some folks add hunks of dark chocolate. This has to be the easiest recipe I’ve ever made. And it’s delicious!