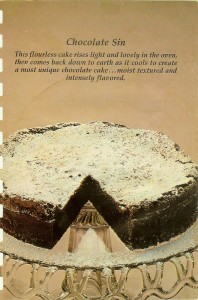 The page from the booklet which has long ago lost its spiral binding. Copyright 1981 by Publications International, Ltd.

The written history of the flourless chocolate cake is full of exaggerations, suppositions, and just plain bad history. I’ve seen it linked to Vienna’s famous Sachertorte – never mind that the Austrian cake contains flour and is coated with both an apricot and a chocolate glaze. Some claim that Torta Caprese from the storied Italian isle of Capri is its antecedent, though it is held together with ground nuts. There are apocryphal stories of how the cake was created “by accident,” that is, when a cook forgot to add flour. Even Wikipedia calls the flourless chocolate cakes – the “chocolate decadence” cakes of the 80s – “fallen” cakes — though the risen batter does not necessarily collapse. Those truly fallen cakes with the molten centers were the rage of the 90s. I’ve never liked them. And, as Tyler Williams, the Executive Chef of the new Husk restaurant opening in Savannah in December, noted, “Even Arby’s sells them!”

I don’t remember the first time I had one of the flourless chocolate cakes variously called “decadence,” “sin,” or “indulgence,” but there were de rigueur on restaurant menus in the 80s. In Maida Heatter’s Book of Great Chocolate Desserts (1980), her first chapter is “Cakes Without of Almost Without Flour.” In it she declares that “no matter how carefully the two [egg yolks beaten with sugar and egg whites beaten with or without sugar] are folded together, they will sink.” I made many of Maida Heatter’s recipes when I lived in Charleston because her recipes work well in the heat and humidity there. (Heatter, who turned 101 in September, still lives and bakes in Miami.) But my favorite recipe (which I have tinkered with for years) for a flourless chocolate cake came from a 32-page spiral-bound booklet published by Consumer Guide® in 1981:  The Perfect Chocolate Dessert. Indeed, 13 perfect recipes I have made again and again, none more often than their “Chocolate Sin,” from which the following recipe was adapted. I have successfully increased the recipe by half again as much (1-1/2 times the original), and baked it in a 10-inch springform pan with excellent results. I have grated orange zest into the batter and used Cointreau instead of the Kahlua or rum and vanilla called for. I have added freshly ground white pepper, which I find uniquely complements chocolate. Like a Sachertorte, this cake is nearly always served with some whipped cream. I place a stainless steel bowl and mixer beaters in the freezer to be very cold, to facilitate whipping the cream.

While an awful lot of the popular foods of the 80s were never my thing — pasta salads, the Seven Layer Dip, blackened fish – I have always loved this simple dessert. I don’t have much of a sweet tooth, but I do crave a good bite of chocolate occasionally. There are literally hundreds of varieties of baking chocolates available that weren’t 35 years ago when this sweet was all the rage. I like to use a semisweet chocolate bar with a fairly high (over 60%) cocoa content in this recipe. I also used French salted butter.

flour for dusting the pan

Preheat the oven to 375° F. Butter and flour the bottom and sides of an 8-inch springform pan and set aside.

Melt the chocolate and butter together and keep warm. This may be done in a microwave or over a pan of warm water.

Beat the egg whites in a small or medium mixing bowl at high speed until very foamy and soft peaks just begin to appear, then gradually beat ¼ cup of the sugar into the whites. Do not overbeat:  if you beat the whites too much the cake will be dry. Better to have still liquid whites rather than stiff ones. Set aside.

Using the same beaters and the large mixing bowl, warmed, beat the egg yolks on high speed until they double in volume. Gradually add the remaining ¾ cup of sugar and continue beating until the mixture is pale yellow and very thick. This may take 6 or 7 minutes. Add the warm chocolate to the yolks and beat until completely smooth. Add the liqueur of your choice and vanilla, if using, and beat until blended.