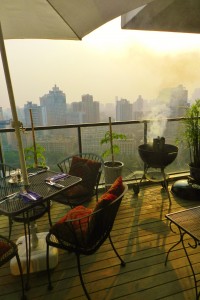 Getting ready to grill on my balcony, where I grow many of the things I can’t find here in China

What do I miss here in China? Mediterranean foods! Hearty breads, okra, olives, fresh herbs, and salad greens. They just don’t eat raw foods here. Even cucumbers are popped in the wok or steamer for a few seconds or minutes before they serve them in cold dishes. I’m growing mesclun and arugula, basil and dill, oregano and marjoram, and parsley and thyme on my balcony. Plus my Bulgarian tomatoes. And I can buy rosemary at the big German Costco-like Metro store, but it’s on the other side of town. Cilantro is everywhere. I order limes from Yunnan province. I can find prosciutto and an occasional whole-grain baguette that isn’t as fluffy as Wonderbread (though only once did I find such a baguette, in a French supermarket also on the other side of town). They wash everything in antibacterial soaps, even if it’s to be peeled and cooked. I guess they’ve learned their lessons after centuries of night soil. There is a big organic movement going on here, but just because the label says organic doesn’t preclude night soil. I make do with what’s available.

Recently – I don’t remember where – I had a salad of Chrysanthemum coronarium leaves, simply dressed with mostly sesame oil. Also known as Edible Crown Daisy, or, most simply, as 茼 (tóng) in Chinese, these are NOT a flower-garden variety of Chrysanthemum: don’t go eating the leaves of your favorite mum or you will be sorely disappointed (and disgusted)! Chrysanthemum is a vast, complicated genus of Asters, and most are now considered by botanists to be Dendranthema. The so-called edible daisies are still classified as Chrysanthemum. They are native to the Mediterranean and East Asia; here they are cultivated specifically as a food plant. Often called Japanese greens, they are also known as garland chrysanthemum, chrysanthemum greens, edible chrysanthemum, horseweed mugwort, and chop suey greens.

Chrysanthemum leaves wilt shortly after being picked; perhaps this is why they are invariably cooked, if even for a few seconds, before eating them. Bruce Cost wrote in Asian Ingredients, “With a soft, spinach-like texture, a subtle musty-floral fragrance, and a slight astringency, these are a popular salad green, though not in the Western sense. Young and freshly picked, they’re occasionally eaten raw in Japan, but the Japanese and Chinese usually parboil them briefly…. In Japan this vegetable is also added, literally at the last minute, to soups and stews. In China it’s also stir-fried with salt, sugar, and wine….Before using, any buds should be plucked and discarded, and the leaves should be rinsed thoroughly, as this may be the world’s sandiest vegetable.”

Even Elizabeth Schneider, my friend and possibly the world’s authority on edible fruits and vegetables, says that their “flavor is anything but soft-spoken. Complex and aromatic, they are prickly-pungent and intensely bitter.” As for their use in salads, they “add punch…provided they are used sparingly…. For less intensity, cook the greens.”

Consequently, nearly every recipe you will find in English, calls for at least a brief cooking of the greens. Bruce Cost suggests wilting them in boiling water for 20 seconds, then running them under cold water, squeezing them free of extra water, and chopping before combining with water chestnuts for a salad. [I tried the recipe. Meh.] Elizabeth adds them to a stir-fry for a salad with frisée and tomatoes, and, at the last minute, to a simple shrimp soup.

Every source I’ve found recommends blanching the leaves first, though there is nearly always the admission that, as Cost wrote, “if you can get them fresh enough, the leaves can be plucked from the stem and tossed with other greens in a Western-style salad.” Since they wilt in mere seconds in water, and since I had had a that lovely salad of bright, flavorful greens, I was determined to recreate it at home.

I found beautiful, just-picked greens from a nearby organic farm. They had almost no blemishes, either black or yellow. They weighed 360 grams (about 3/4 pound). I figured that that would be enough for 4 people, but we were only two, and we were having a frittata alongside it. I had a feeling we’d eat it all. (We did. See photo, left.)

Cleaned of their stems and buds, the greens weighed 5 ounces. I sprinkled them heavily with salt and set them aside. I combined 2 teaspoons of rice vinegar, 2 teaspoons of soy sauce,  and 1 teaspoon of sugar. In a small frying pan, I warmed a finely minced garlic clove in 3 tablespoons of sesame oil, letting the garlic sizzle, but not letting it brown. I combined the garlicky oil with the other ingredients, poured it on the greens, and tossed it well. I realized after tasting the salad, which was delicious, that the version I had had in the restaurant also included ginger; frankly, I liked mine better.

Grilling Fruits and Vegetables (from The New Southern Cook) 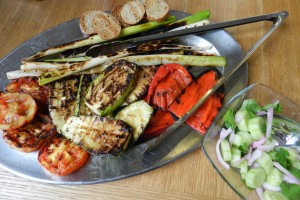 When I say that I grill everything, I’m hardly exaggerating: bananas, pineapple, grapefruit, underripe peaches and pears, green and red tomatoes, leeks, cabbage, onions, garlic, eggplant, squash, peppers, and bread, not to mention all the fish, fowl, meats, and game.

Nearly all of these foods are prepared in basically the same way: lightly oiled and seasoned, then grilled to taste. I use some of the grilled foods as part of other recipes (For example, see my instructions for grilling vegetables to go in frittate from the blog on May 7, 2008.)

A few notes on my mixed grill follow. Though I generally recommend a medium flame for most vegetables, I actually like to use very hot coals, as is necessary when you are searing the skins of peppers in order to peel them.

Hard-skinned fruits: Don’t peel bananas, pineapples, or grapefruits, though you should quarter the pineapple and grapefruit lengthwise. All are good with fish; the pineapple is good with pork. You can put them   directly on the grill; oiling the fruits is optional.

Soft-skinned fruits: Don’t peel peaches or pears, but lightly baste them with a flavorless oil and cook them just to warm through.

Tomatoes: Green tomatoes are just as good grilled as fried. Cut them into 1/2-inch slices, oil and season them with salt, pepper, and cayenne to taste, and grill until they just begin to soften and are warmed through. You can also dust them in seasoned cornflour as if you were frying them if you want a crispy coating.

Red ripe tomatoes are delicious grilled. Cut the tomatoes in half horizontally and place them on a plate, cut sides down. Oil the skin sides and place the oiled sides down on the grill. Cook until the skin starts to pull back, drizzle some more oil on the top, then turn to cook on the other side or drizzle some seasoned bread crumbs, grated cheese, or minced basil leaves on the tops, then cover the grill and cook for a few  more  minutes just to warm through.

Onions, Leeks, and  Garlic: Grill whole onions just as you do red tomatoes, slicing them unpeeled in half horizontally. Oil the skin sides, place them oiled sides down on the grill and cook until they begin to give to the touch. Drizzle oil on the cut sides and turn to finish the cooking. Trim after grilling but before serving. Sweet onions are particularly good like this. Split leeks lengthwise down to but not into the base. Wash well under running water until there is no sign of grit, then shake off the excess water. Oil well and season with salt and pepper. Grill until the leek softens and is slightly charred all over. Remove from the grill and slice off the base and the outer leaves and discard. Whole heads of garlic can be roasted either on a covered grill or down in the coals. They will take about 1/2 hour, depending on the heat. Oil them lightly. If you place them down in the coals you should wrap them in aluminum foil.

Corn on the Cob: Several methods, but the easiest is to simply soak the entire ears in a bucket of water before putting them on a medium grill. Alternately, you can carefully pull back the corn husks without removing them from the ear of corn. Pull away the silk, then lightly oil the corn kernels. Pull the husks back up around the corn and grill until done to your liking. Many new varieties of corn are so sweet that they really don’t need to be cooked, but just warmed through. Don’t let it dry out!

Cabbage: Quarter small cabbages or cut larger ones into eighths. Don’t bother to remove the outer leaves. Oil the cabbage, season it with salt and pepper, and grill on each side until it just starts to become translucent and it is richly branded by the grill.