June 27, 2013 I bragged while I was in Morocco that while I was eating street food and drinking tap water, many of the Peace Corps conference attendees became ill with a lower GI bug that was rampant in Rabat, the nation’s capital (an outbreak confirmed by the US Ambassador there). I should have known better: I got home and it’s begun! At least I know it wasn’t something I ate. 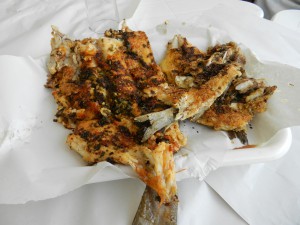 Not these grilled fish that I had in the fishing village of Moulay Bousselham (left), nor the many street foods I gobbled with abandon in Rabat. I am surprised travel writers don’t offer higher praise of Rabat, which I found to be fascinating, with an historic center that is just about the right size to explore on foot. With over a million people, it’s second in size to Casablanca, which I didn’t find to be nearly as interesting a city, in spite of its wide avenues lined with Art-Deco-meets-Andalucian-Maghreb architecture.

Those coastal cities lie at about the same parallel as Charleston (South Carolina), but the Eastern Atlantic is much rougher and colder than our southeastern coast (which is warmed by the Gulf Stream), and a prevailing northwesterly wind keeps them much cooler than I had anticipated. I was told that their spring had been perfectly lovely, and the weather continued while we were there. In the evenings I wore long sleeves and/or cotton sweaters. Tropical and subtropical plants abound in Rabat; there are hedges of bougainvillea, plumbago, and hibiscus. Giant ginger lilies and birds of paradise are crammed into dooryards and agapanthus blooms at the base of the ubiquitous palms. There are loquats and papyrus, brugmansia and rubber trees. Roses and lantana are common as well. Here are some photos (you can click to enlarge and hover over the slide to see a title):

The medina — the old city with its 17th Century walls and its vibrant souks — quickly had me forgetting that Air France had lost our bags. Mikel and I went for a walk and immediately bought shrimp and meat briouats — triangular warkha pastries that were also full of shredded vegetables and fried. I have a video of warkha being made on the street, which I’ll edit and eventually post. We stopped at a hole in the wall and had lamb liver with rice and an odd salad that we would encounter again and again in food stalls throughout northern Morocco — odd because it included potatoes, beets, pasta, and rice! One day, I couldn’t resist a stall selling fried sardine sandwiches. They’d mash the sardines into split baguettes (remember, the French were there for a long time) and ask what “salads” you wanted on the sandwich — I took a salsa-like fresh tomato garnish along with garlicky harissa, of course. And a side of greasy fried eggplant and (peeled) peppers. It was all delicious. Though the markets throughout the Arab world are more often than not divided into sections so that jewelry predominates in one place and rugs in another, you’re liable to run into just about anything for sale in any alley — and there is always some food being offered, if only from a vendor’s cart. Here are some more photos:

I’m not sure this page can handle more than one slideshow. I’m calling it quits for the day… that’s just one day of 9 in Morocco… to be continued…