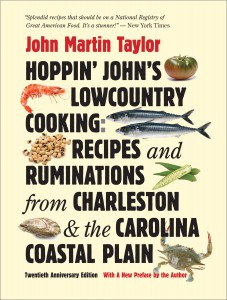 The release of my book — the same book it’s always been, with a new preface — is garnering lots of attention all over again.

Tomorrow (September 12, 2012) the food journalist Tim Carman will publish his in-depth look at the book and its influence in the Washington Post Food section. At Noon EST, I will join Tim in the paper’s online food chat room, Free Range.

When the book was first released, Russ Parsons had just taken the reins at the Los Angeles Times, and he hired the brilliant food writer Anne Mendelson to interview me and write about the book. I think Tim’s article will sound very similar to Anne’s, though he had not seen hers when he wrote his.  You can read Anne’s here. Too bad you can’t see the great photos. The article covered the entire front page of the Food Section — a first for the Times.

Southern Living has a new blog and my old friend Donna Florio, who’s an Associate Editor there, began with a look at the book and its influence. She incorrectly states that I closed the store after Hurricane Hugo (and that the Lee Bros. are natives), but that’s okay. Anne Mendelson describes mud coming into my second floor apartment! (I lived behind the store then, not above it. ) I’ve yet to find an article anywhere without its flaws. Things change. Truth is relative.

This article in Charleston Magazine says the book has new recipes. Not so, but I am ever appreciative of the editors of that magazine, who have always championed me and my work, almost slavishly so.

Claudia Kousoulas’s review is sweet. When my Bulgarian friend Angelina read it, she wrote, “I like this review, sounds friendly, not overwhelmingly professional. That’s something I’ve admired with you too, actually – you have such vast knowledge on South cooking, history, social life, culture, botany, and what not; however you never make me feel uneducated on these matters, but intrigued to learn about them and eager to hear your stories which are more like ‘culinary fairy tales’ to me!”

If you’re up for it, you can listen to an hour-long conversation with me and Steve Boss on his radio program, Great Taste.

I’ll be on tour in the States in October. Here’s the schedule.