With limited time between lunch and dinner, Nok had asked me to let her know in advance what I wanted her to cook for me so that she was sure to have on hand any ingredients we couldn’t find at the market. I really wanted to go with what inspired me at the market, but I understood her limitations. Her kitchen is not a teaching kitchen. It’s very basic. So as well as the Tung Thang* (see previous blog entry and below), I thought perhaps I should go for the basics – Pad Thai and Green Papaya Salad.

“Chicken, prawn, or pork?” she asked.  Even though I knew there were shrimp in the fried dumplings, I wanted them with the noodles and salad as well. I can buy fresh seafood – mostly farm-raised – in Chengdu, but I wanted to take advantage of the fresh local bounty. We hand-picked the plumpest ones from the vendor, whose husband was probably catching them right in front of our rented house earlier that day or the night before. The photo below shows a typical local fisherman. 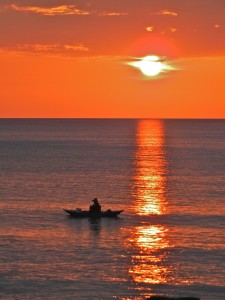 I was so excited about watching a real cook cook real Thai food. I call Nok a “cook” even though she is an accomplished chef because her food is fresh, local, and traditional. I remember my first exposure to Southeast Asian recipes was in Charmaine Solomon’s incredible The Complete Asian Cookbook from 1976. Believe it or not, it’s one of the handful of cookbooks I brought with me (from my thousands) overseas. She was so ahead of her time. Interestingly, the book doesn’t include recipes for any of these now classic dishes. Perhaps they weren’t as popular then, or perhaps she simply wanted to include the most representative dishes from each of the 15 Asian countries included in the massive tome. There have been several revised editions since it was originally published. In the 30-page section on Thailand, she writes, “Thai cooking…is very much a taste-and-add affair. While the recipes are splendid, it is very difficult to obtain exact recipes because most Thai cooks don’t use them. It is best to watch the cook closely, noting every move and taking careful and copious notes.” Describing the cook with whom she “seldom spent so edifying and afternoon,” Solomon noted that “like every country, Thailand has a classic cuisine and a peasant cuisine. She uses both, depending on the occasion.” 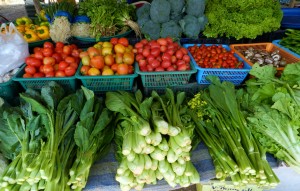 At the market I couldn’t resist buying some greens  and seaweed, which one of the shrimpers’ wives was selling. Of the seaweed, which was the best I’ve ever eaten (surely because of its freshness), Nok said, “You can add it to the papaya salad.” Mikel noted that the little globules burst on the tongue like caviar. It tasted the way the ocean smells. (Photo below.) 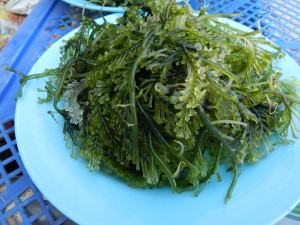 The greens, which Nok called Phak Kwang Tung (literally, Guangdong Greens), were what I would call Chinese Mustard Greens. But as I have written before, the common names of the thousands of varieties of greens are mind-boggling. And deciphering the different species of the genus Brassica really doesn’t matter to most home cooks, or gardeners, for that matter. Often referred to as choi or choy sum, it is more correctly called Yau choy or yu choy or yu choy sum. What we found were the mature, foot-long, dark green, yellow-flowered mature stems (third from the left in the photo, above right). It’s similar to Chinese broccoli, which you can treat in the same manner.  In his Asian Ingredients (1988), Bruce Cost wrote, “Yow choy means ‘oil vegetable’…. It’s the ubiquitous green of Hong Kong, where it’s called simply choy sum, or ‘flowering green’.” By the time  Ken Hom wrote his own book of  Asian ingredients in 1996, the green had become familiar enough to the American cook that he simply advised that it “is delicious stir-fried with olive oil and garlic and used in fillings and with pasta. The cabbage leaves require little cooking to bring out their delicate, sweet, mustard flavors.” That was the only recipe he offered.  I was thrilled to watch Nok cook the greens for me, during which she used the same flavors (if not the same ingredients) that I normally use and a very similar technique.  I’ve run similar recipes on the blog before. You can use Chinese broccoli, rapini, or other study greens in this recipe just as well.

The main difference between the way I would normally cook greens and Nok’s is that she uses a touch a of sweetness, from both the oyster sauce and sugar.  Her coup de grâce (for me, because it is a brilliant touch) is a garnish of deep fried garlic, which she happened to have on hand. The garlic is thinly sliced and fried quickly until it is golden and sweet,  but not browned, at which point it becomes bitter. You can add shrimp or chicken or tofu to this dish, adding it to the pan before the seasonings.

a tablespoon of oil (I use olive oil) 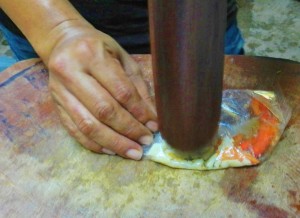 Wash the greens and chop the stems into pieces; slice the greens as well into bite size pieces. Don’t shake off the water, you will want it clinging to the greens. Mince the garlic and chilies together. Nok does this by putting them in a plastic bag and pounding them with a pestle, to avoid the pungent fumes.

Heat a wok or large deep skillet over a high flame, add the oil, then stir in the garlic and chilies. At this point Nok adds the water and there  are dramatic flames, but I prefer to add the greens (stems first if they are thick) and the water that clings to them, plus more water or stock if necessary. Immediately add the seasonings to taste, stirring and tossing the vegetables around until they are wilted and tender. It will take about 4 minutes. 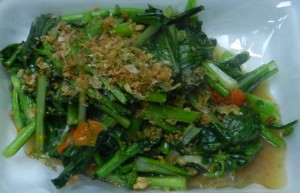 *about these names…Nancie McDermott tells me that she would render Tung Thang “as ‘tong’. Or ‘thong’. The ‘th’ is because it is a hard-T, not a soft-T sound at the beginning. Involves aspiration of the T sound. But the vowel is key here and ‘a’ should be ‘o’ either way. Rhymes with ‘song’ as in sing a song, but with a bit more of an ‘oe’ as in ‘toe’….  The spelling is such a challenge — no consistent way to go. I go with pronunciation, an attempt to give people a headstart on pronouncing or understanding, and that is just my personal preference. Hence I despise ‘larb’ and use ‘lahp’ for the minced meat ‘salad’ of Northeastern origin. ” She should know. Google Translate gave “T̄hung thxng.” I’d love to hear an American (or anyone, for that matter), try to pronounce THAT!