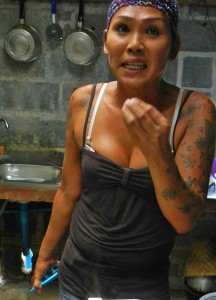 Mikel and I rented a house on sandy Klong Nin Beach on the island of Koh Lanta in southern Thailand for the first two weeks of the year. I asked the homeowner if he knew of someone who might cook for us – or someone who might at least accompany me to a market. Though I wasn’t really interested in taking a formal cooking class, I was keen on watching a real Thai in the kitchen. He suggested I contact Nok Noi (“Litte Bird”), who had recently opened her own restaurant on the main road of the laid-back beach village. “She’s a ladyboy,” he wrote. “I trust that’s alright.”

“Ladyboys,” or “kathoeys,” as they are called in Thai (though don’t try pronouncing that as if it were an English word!) are probably best known as either beautiful cabaret dancers or prostitutes in Bangkok, but they can be transgendered, transvestite, or simply cross-dressers – from all walks of life and every region of the country. Though Thailand is a generally extremely conservative country, many kathoeys are well integrated into society and are not frowned upon. Many who have not had gender realignment surgery are so feminine that I dare you to tell them from those who were born female. You find them working as flight attendants, at cosmetic counters, and as movie stars. At least one is a boxing legend. I did not delve deeply into Nok’s personal life, not that she wouldn’t have shared her life story with me, but simply because we had limited time together (her new spot, with only a handful of tables, is open breakfast, lunch, and dinner) and, frankly, I didn’t think it was of much importance. She grew up in Bangkok and has “always cooked.” She Skypes with her family back home daily. Her former fiancé was killed in an automobile accident, but she is currently married to a very nice fellow. They live above the restaurant (here’s the TripAdvisor review – she just opened and at this writing already has 10 reviews – all 5-star), but hope to build living quarters behind the current octagonal building and move the customer dining upstairs, away from the road. If you go, tell her I sent you, but don’t expect a cooking lesson. She was gracious with her time and she was an excellent teacher (her English is very good; more importantly, she knows her stuff!), but when I told her that she should open a cooking school, she told me that she wasn’t interested. She just wants to cook for people. She had cooked at a beachfront resort across the street for 5 years, so when she opened her own place late last year, the locals and her regulars were thrilled. I love her expression in the photo above, left. She was stressing the importance of respecting the ingredients and treating them properly to get the best flavors. 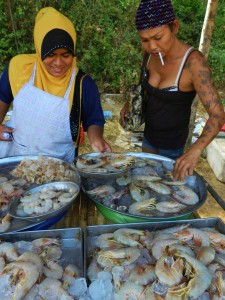 We began with a trip (in a tuk-tuk) to the Wednesday afternoon market (I had been earlier in the day but the fishmongers and butchers weren’t there yet). “You have to go after 3 o’clock,” she told me. “That’s when the chefs and home cooks are free between lunch and dinner.” Most of the vendors were Muslim fishermen’s and farmers’ wives. They all knew Nok and vied for her business.  Afterwards we went to her simple, tiny (but immaculate) kitchen, which she and her husband built themselves, and she cooked several dishes for me with the ingredients we had purchased at the market. Afterwards, she drove me back to our beach house on her scooter, with to-go bags full of the incredibly tasty treats. 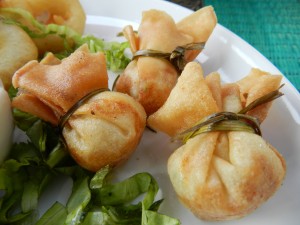 I had already eaten these beggar’s pouches at Nok Style, so I asked that she show me how they were made. Amazingly, all of the dishes that “we” made – including these fried dumplings – tasted fine even an hour or so later at room temperature. The food of Thailand really is a hot-weather cuisine. Nok used packaged wrappers that were large squares that she cut into smaller ones, about 4” each. They looked a lot thinner than regular wonton wrappers to me, but she said that wonton wrappers would do fine, just be sure to cut off any ragged edge so that it both fries up right and so that it looks nice. I think what you really need are spring roll wrappers that have no egg. You can probably find frozen ones in the States. We made 10 or 12 dumplings and had a little bit of filling leftover, which she assured me you can freeze and use later. Like many chefs who have worked in hotel kitchens, she uses a “secret ingredient,” which happens to be stock powder. I was afraid that it might include some noxious ingredient like MSG, but I found that it is made by Knorr, the German giant, and they are catering to serious chefs all over the world with all-natural ingredients. They individualize ingredients for each country. The Knorr chicken stock powder that Nok uses contains no MSG, though it’s decidedly salty. She doesn’t use fish sauce or salt in these pouches because she uses the powder.

She ties the bundles up with strips of pandan leaves (Pandanus amaryllifolius) from her yard, but says you can use scallion greens instead. Pandan is used widely in Thai cooking and it imparts a delicate breadlike flavor to many dishes. For a dipping sauce, Nok mixes a sweet and sour sauce with a spicy plum sauce. The American food writer Nancie McDermott  lived in Thailand for several years in the 70s an 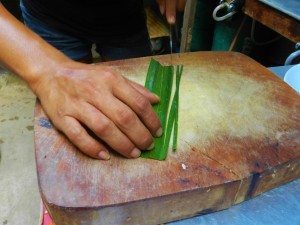 d has written extensively about Thai food. I adapted her Chili Sauce recipe for inclusion in my Fearless Frying Cookbook and posted the recipe on the blog in March 2008. Serve with the sweet and hot sauce of your choice. This recipe is a general one. You may use pork instead of chicken, or all pork, or all chicken. Water chestnuts, scallions, onions, and/or ginger can be added to the filling if you like, but if you want it Nok Style, stick to the coriander root. 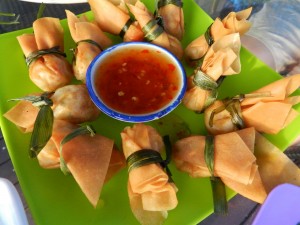 Okay, so mine don’t look as good as Nok’s, but, hey, it was my first time!

Trim the wonton wrappers of any rough edges and cut them into 3 or 4” squares. It’s probably best to cover them with plastic wrap or a damp towel so that they don’t dry out, especially if you are new at this.

Using a cleaver, mince the shrimp and chicken together, then add the coriander root and mince it into the minced meat. Add the seasonings and mix well. Place a heaping teaspoon of the filling on the center of wonton wrapper, and, working quickly but methodically, gather the four corners of the wrapper together to form a pouch, tucking in any errant folds. Tie with pandan or scallion leaves and set aside. Repeat with the remaining wrappers and filling.

Heat enough oil in a wok to cover the dumplings. Though I usually recommend frying most things at 365° F, Nok warns that you should fry these at a lower temperature, so that the wrappers don’t burn before the fillings cook. Move the dumplings around so that they fry evenly on all sides, using the inner walls of the wok to push the ones that are cooking more quickly up out of the oil so that they are all cooked at the same time. Remove the “golden bags” from the oil with a strainer and allow all the oil to drain back in the pot before placing them on a serving platter. Serve hot, warm, or at room temperature with a sweet chili sauce.