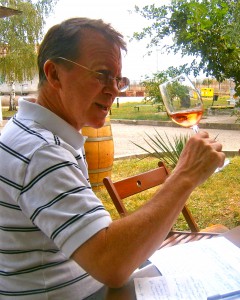 As many of you know, I am living in Bulgaria because my husband is the Peace Corps Country Director here. What you may not know is that the Peace Corps is pulling out of Bulgaria. As a member of both NATO and the EU, Bulgaria is no longer considered “developing.” There are other more needy places — Nepal, Vietnam, Haiti… On October 2, Peace Corps Bulgaria is celebrating its 21-year legacy here. Our friend Philip Harmandjiev, the owner of Damianitza Winery, donated the wines for the celebration, but said that he may not be able to attend the event because it’s harvest time.

That made me realize that I have yet to blog about Bulgarian wines, of which I have grown quite fond. Until some very recent discoveries in Georgia, Bulgaria was believed to be the oldest winemaking region in the world. Ottoman and Soviet oppression, however, blunted the historical records. Here’s an in-depth overview of winemaking in Bulgaria. All I know is what I’ve tasted myself.

Though I began drinking local wines almost exclusively when we arrived here last summer, my real introduction to serious winemaking in Bulgaria was  last fall when my own wine guru, Debbie Marlowe, came to visit. I looked at the various wine-producing regions in the country, made some calls, and it was Philip (as well as Petar Drosanki, owner of Logodaj winery) who invited us to come tour and taste. It was mid October and they had both just finished harvesting. Though their wineries are located south of Sofia, in the Struma Valley, down near the Greek border, they have vineyards all over the country.

Gamza is a light-bodied wine, like a Bourgueil, a Beaujolais, or a Dolcetto, perfect for the lighter meals of autumn and spring. Its alcohol content is rarely above 11%. Once a dominant grape in the region, it has now taken a back seat to the French reds and whites that pack a wallop.

When I first arrived in the Balkans, I was looking forward to tasting and learning more about the local varieties like Gamza — Dimyat, Tamyanka, Mavrud, Pamid, and the Melnik varieties of Bulgaria, as well as Macedonian Vranec, Romanian Fetască Negră, and Greek Xinomavro (from which some of my favorite wines, both red and rosé, are made). In every restaurant and wine shop I entered, however, the wines being recommended were nearly all Western European varieties and blends — Cabernet Sauvignon, Merlot, Syrah, Sauvignon Blanc, Chardonnay, Riesling, and Traminer. I am no fan of the California/International style of winemaking that has seen indigenous grapevines pulled up the world over to plant these mostly French varieties. Yes, I love French wine, probably more than any. The wines of the Rhône Valley have been my house wines for 30 years. But I do not like the high alcohol content, in-your-face fruit, and heavy oaking that has taken the world by storm. Only fortified wines used to have over 14% alcohol. Now this sledgehammer style seems to be the norm, even in French rosés.  The 2011 vintage of the much-vaunted Domaine Ott Clos Mireille Rosé, at $43/bottle, has 13.5% alcohol! The winery suggests serving this wine at lunch with fish and vegetables. I can’t imagine. Now even some of the once elegant French Burgundies have as much as 14% alcohol, more like a Californina Zinfandel. There is much debate over the causes of these rising alcohol levels, but rising global temperatures — and the cultivation of grape varieties in regions much warmer than their origins — seem the logical explanation to me. Plus, there seems to be little subtlety in the American palate. Mikel was recently at a conference in Washington and came home shocked at how much food was put on the plates of even the most elegant restaurants where he dined.

Neither of us is a food or wine snob. We eat what is put before us and drink what is offered to us. We both prefer cooking and wines that showcase the natural characteristics of the raw ingredients. One of the reasons I have not cared for many of the new, powerful wines is there seems to be too much winemaking and not enough respect for the grapes. My friend Joann Yaeger, easily the best cook I’ve ever known (and a former Charleston chef and restaurateur), once said, “There’s only room for one ego in a kitchen, and it should be the food’s.” But I was wrong to not try the Cabs, Merlots, Bordeaux-style blends, Chardonnays, and even the Sauvignon Blancs (my least favorite grape) of Bulgaria. They are making some world-class wines here. The emergence of the modern industry here has been gradual and I can’t help but think that the excellence is at least partially due to a respect for tradition and the fact that Bulgaria now has weather that is possibly closer to what Western Europe’s used to be.

Mind you, we do not drink  “world-class” on a daily basis. In fact, we drink many ordinary table wines, some of them costing mere pennies per glass! I just got up from my desk and went into our dining room, where we keep several dozen bottles to have on hand. I pulled the following 8 wines from the racks. They are described below 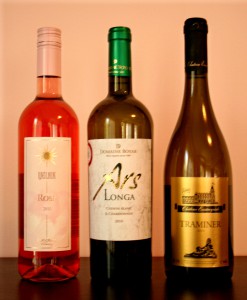 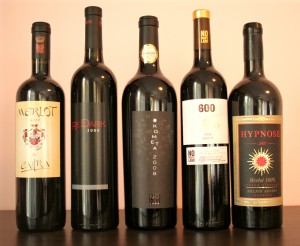 To the far left, this Rosé of Melnik, by Logodaj, is a very light, uniquely flavored and tart wine made from the Shiroka Melnishka Loza (the broad leaf vine of Melnik), an ancient indigenous variety. I pay about $3 for the bottle. Although grown in the blazingly hot Struma Valley, the grapes ripen slowly. Still, the 2011 has 14% alcohol. Pleasantly sour, it’s very nice with vegetables, as we discovered last night with our slow-cooked pole beans, corn on the cob, and oily arugula salad. 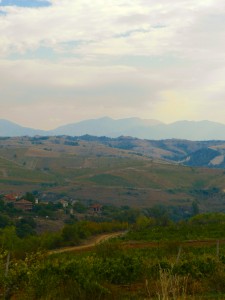 The Struma Valley, in the Southwest of the country, has many microclimates more closely akin to the Mediterranean than the Balkans. Both Philip and Petar are producing a wide variety of wines to both attract and educate their ever-expanding clientele.  At the other end of the Logodaj line (and to the far right in the photo, above), the Logodaj Hypnose Reserve Merlot has been called “the best red wine in Bulgaria.” We tasted the 2008 from the barrel. Finished by Riccardo Cotarrela, brother of Renzo, of Antinori fame, this wine is a single-vineyard, unfiltered, elegant wine, though at 15% alcohol, it must be sipped. We recently had the 2007 (about $30) with slow-cooked duck breasts and it was perfect. I swear if I had drunk it blind, I would have guessed Pomerol. 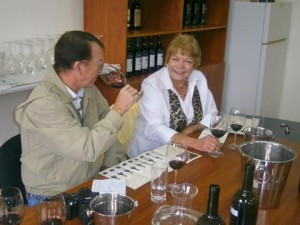 To the right, Debbie and I tasting the wines at Logodaj last fall. At Damianitza, we tasted seven wines with Philip and Ivo Todorov, his winemaker, before heading to the excellent Adjev Han restaurant in Sandanski, where Chef Sashko Adjev is serving some of the finest, authentic Bulgarian dishes that I have had. Todorov is making wines that are not beholden to international trends; he and Philip are serious “terroiristes” with a deep respect for the soil, water, and the environment. They told me that they pick their grapes “on acidity and tannins, not sugars” — that is, when the grapes are “soft.” Debbie and I were blown away by their 2008 Kometa label (the middle bottle in the photo to the right, above) Merlot-Cab blend, which won the Gold Label at the 2010 Mundus Vini International Wine Competition. My notes say, “very extracted but balanced.” As part of the “No Man’s Land” series of wines(so-called because the grapes are grown in the borderlands that formerly separated communism from capitalism), this huge, premium wine (14.5% alcohol, about $35), which is aged in new French oak for 10 months, begs for a rich meaty dish. Hmmm… steaks or leg of lamb? Or should I just go to the new cheese shop in town and bring home a variety of cheeses and some good French bread and spend an afternoon lingering over the bottle?

I’ve been drinking two other Damianitza reds, the 2008 No Man’s Land 600, a Merlot-Cabernet blend made from whole grapes, not crushed. The slow fermentation allows Ivo more time to bottle the wine precisely when it’s at its peak. Aged in French oak for nine months, this wine is absolutely quaffable now, and a steal at $10.  I was thrilled to find a case of the 2000 Redark, which was called “the first ever [Bulgarian] icon wine”, by Caroline Gilby in Decanter magazine.  Predominantly Merlot, the wine has aged well. More recent vintages have seen the addition of Cabernet Sauvignon and the local grapes Ruen and Rubin to the blend, and the alcohol has gone up to over 14%, but the berry aromas, subtle fruit, and round tannins of the 2000 (at 13.5% alcohol) are right up my alley. 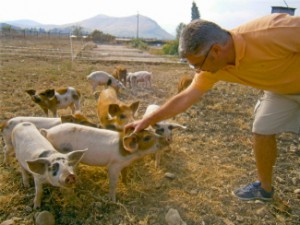 The 2009 Enira Merlot sells for about $5. It’s a perfectly lovely everyday wine from the Thracian Valley, south of the central Balkan range. One of the oldest wine-growing regions in the world, with an almost uninterrupted 5000-year wine-growing heritage, the area is attracting investors from around the world. Bessa Valley Winery, which produces the Enira, is owned in part by Count Stephan von Neipperg, the proprietor of several estates in Bordeaux, including the Grand Cru Classé Chateau Canon la Gaffeliere in Saint-Emilion, and Dr. Karl-Heinz Hauptmann, the former Director of Merrill Lynch London. I mention this to point to the increasing interest in the fine wines of Bulgaria.

I have barely begun to scratch the surface of Bulgarian winemaking. Though I don’t drink many white wines (except the occasional splurge on a big, white Burgundy), I find that I really like many of them here in Bulgarian.

I have always found it somewhat difficult to find a wine acidic enough, and yet well-balanced enough, to go with fried chicken, though back home, I usually reached for a jug wine, heavy on chenin blanc, from the south of France. Ars Longa (the middle wine in the photo at left, above) is a 2010 Chardonnay-Chenin Blanc, also a $5 wine, that perfectly fits the bill. Made by Domaine Boyar in the Eastern Region of the country, the wine won a silver medal at the Vinalies International 2011 in Paris.

That leaves the Black Sea Region, where the micro climate and micro vineyards of the former Tsar’s summer palace, Château Euxinograde, produce elegant white wines and cognacs from the aromatic grape varieties that seem to love the salt air. The 2011 Traminer (about $7) , at 12.3% alcohol, was the perfect accompaniment to some of the spicy summer fare I served, including the southern classic, Chicken Country Captain.

I’ll be writing more about Bulgarian wines, but now I need to make lunch! Getting up from my desk, I found my notes from the Struma Valley from last fall. I looked for them for an hour this morning. I think I need a drink!