This was my going-away present to Charleston, a true story about
The Best Christmas Present Ever
a version of which appeared in Charleston Magazine in December 2004, shortly after I moved away.
PURDUE
My mother was on odd bird, at once very private and very social. Though she cooked three meals a day and did all of our voluminous laundry and housecleaning herself, she managed to play bridge often (at one point, seven times a week!) and to attend church, garden club, circle, and PTA meetings regularly. She somehow managed to travel as well — to the shore on the weekends, to New York with her girlfriends in the fall, sailing in the Caribbean with my father, and on a big family trip each summer. We always spent the holidays together, either at home in South Carolina or visiting relatives in Tennessee. One year, I was the first to arrive home from college at Christmas. I found my mother playing hymns and carols on the console piano in the living room. It was the first and last time that any of us heard her play.

When we lost her at Thanksgiving to leukemia twenty-five years ago, we were robbed of one of the last of the great old-fashioned homemakers. The holidays have never been the same. My parents were young when my mother died. Daddy had retired early so that they could spend their lives together aboard their sailboat. He was ill prepared for her demise. He started dating fairly soon after Mama’s death; the women were much younger than he was. He wanted an energetic companion who could be his first mate, the way my mother had been. Before long, a young woman just a little older than his oldest child moved aboard with him. They seemed genuinely happy, though I’ve never seen two people more different. 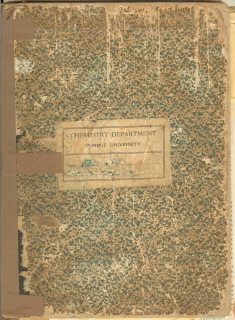 Both of my parents were scientists by training, but Mother agreed to raise children while my father pursued his career. From the beginning of their marriage, she developed an almost fanatical interest in cooking. Though firmly rooted in her rural southern upbringing, her repertoire came to include Spanish paellas, Viennese desserts, and French stews. Her adventurous palate was enhanced by both her reading and her travels. (When fairy rings of agaric mushrooms appeared in our yard, for example, she harvested them, sautéed them, and added them to omelets.) Her first handwritten collection of some of her favorite recipes — a book we all called “Purdue” because it was recorded in an old chemistry department notebook from the university where my father had attended graduate school — was a source of both recipes and pride. Invariably, my siblings and I would call Daddy at Christmas, desperate for a cookie recipe, for while Mother was an exceptional cook, she never really taught us how.

Daddy had always shared Mother’s enthusiasm for good food. When we traveled, we ate in the Duncan Hines- and New York Times-recommended restaurants. We even had a wine cellar in a small town in South Carolina in the fifties! And while he always did the grilling at home, Mother had always been the cook. When she became ill, he took to cooking the way he had to sailing. He’s quite a home chef. I had just begun my career as a food writer, and he and I read through the literature of food together. We shared kitchen tips and tested each other’s theories and recipes. Though he’s slowed down a bit now, we still do.

When he sold his house and moved aboard the boat, Lila joined him. I got Mother’s collection of cookbooks — a thousand of them! — but Dad kept a few gems, most importantly, Purdue. After a couple of years, he and Lila got married; their pre-nuptial arrangement was a division of labor: he’d do the shopping and cooking and she’d do the cleaning — an arrangement they’ve stuck with through the years. Eventually, when handling the boat became more work than fun, they bought a simple house on a canal in Florida. Dad continued to cook elaborate meals, which Lila and their friends enjoyed, but Lila admits that her major culinary interest is for good chocolate and even better coffee. We all felt even more honored and surprised, therefore, when, one landlocked Christmas now fifteen years ago, she and Daddy presented each of us — there are four kids — with the most thoughtful gift I’ve ever received. At 72, my father had bought himself a computer, taught himself how to type, and painstakingly copied the fragile yellow pages of Purdue, recipe by recipe, page by page, omitting some of the possible substitutions such as margarine, but remaining true to Mother’s originals. By then, he had been the cook at home for over ten years, and he was used to testing recipes for me.

Purdue is a wonderful collection. In a concise forward, Daddy wrote, “These recipes were collected and recorded … beginning in 1942 and continuing for about ten years…. They were by no means her repertoire but rather, I suspect, those not in cookbooks and those not committed to memory…” While he transcribed, Lila baked. For Christmas that year we each received not only a copy of the marvelous recipes, but also tins of cookies, a dozen each of a dozen varieties, each labeled with the recipe title and page number in the book. It was the most thoughtful gift that I’ve ever received, and I continue to find wonderful ideas among the recipes. There are delicious “Pecan Shells” — buttery, nutty crusts that you drape while still warm over custard cups to hold your favorite ice cream, mousse, or pudding. There are hot cheese tarts enlivened with country ham. There are exotic breads such as chapati and a classic pizza, with a slow-rise yeast dough, tomatoes, mozzarella, anchovies, Parmesan, and oregano. Mother’s deviled crab, I found, has a roux made with cream. No wonder it tasted so good! Her gumbo included shrimp, ham, and crabmeat. There are recipes from Lindy’s and The Four Seasons. Her Bourbon Balls are made with homemade shortbread instead of the more pedestrian Vanilla Wafers.

P.S. November 2007. Probably the most popular recipe in my cookbooks, vying even with cornbread, is Pickled Shrimp. The shrimp aren’t really “pickled” in the usual sense; they’re more like the Italians’ sott’olio (marinated in olive oil). They will keep for two weeks but they’re so delicious, there’s no way you’ll have them around that long! Thumbing through the original of Purdue (which I got from Daddy a couple of years ago), I ran across Mama’s version, on page 2 of the manuscript: 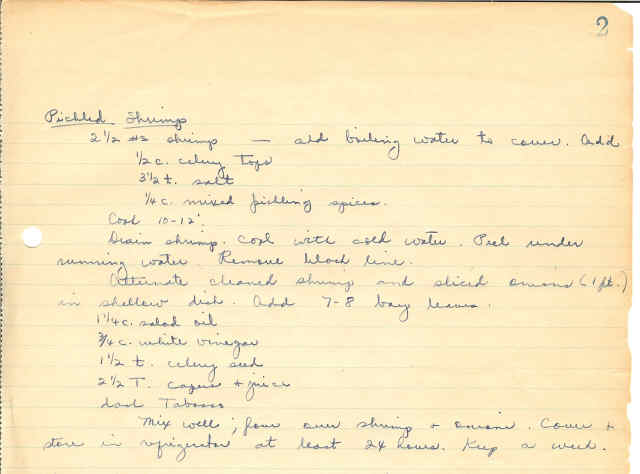 Mama’s method of pouring boiling water over shrimp and adding celery tops, salt, and pickling spice is an elegant preparation of the shellfish. Her version does not, like mine, have mustard seeds, but there are the capers that she so loved, and that given dash of Tabasco that bears out our having lived in Louisiana, where I was born, for a few years.
She says that hers “keep a week.”  Good luck!