some of the following essay appeared in The Washington Post on January 17, 2007:
Charcuterie
The ancient Greeks, Romans, Sumerians, and Chinese all made sausages, and Amerindians made jerky and smoked fish. Preserved meats such as these, as well the more elaborate pâtés and terrines that were developed in the Renaissance, are all considered charcuterie, the late 15th century French term that distinguishes the meat preservers from the butchers. The hog provides more parts for charcuterie than any other animal. Nose to Tail Eating is the title of London chef Fergus Henderson’s trailblazing cookbook from 2004, but the phrase has become a sort of mantra for many celebrity chefs such as Montréal’s Martin Picard, New York’s Mario Batali, and Donald Link and Stephen Stryjewski of Cochon in New Orleans. [More on Henderson's legendary restaurants to come. Stay tuned!]
No Eastern or Western European village is without its butcher and charcutier. The American cities and towns where Ukrainians, French, German, Spanish, and Italians settled all had their neighborhood butchers and delis as well until very recently, when the younger generation chose not to continue the family trade in the face of ever more astringent federal rules and the unglamorous nature of butchering. 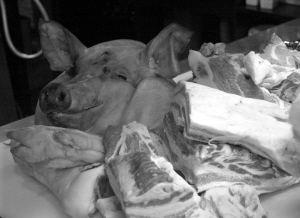 In the lowcountry of South Carolina where I grew up and where small town butchers have traditionally offered head cheese, liver pudding, mountain oysters and pig’s feet alongside the ribs and hams, all four of the butchers who provided me with sausages and insights into the glories of the hog have closed up shop since my first book on the cooking of the area was first published in 1992.
In Manhattan’s East Village, traditional home of Ukrainian immigrants, Jerry Kurowyckyj was recently told by health inspectors that he must no longer display at room temperature the sausages that three generations have been making and selling in his family’s 52-year-old shop.“They’re applying the same rules that were written for the major manufacturers to small, artisanal producers like me,” he said. “But I do things exactly the way my grandfather did, and his grandfather before him. I’ve never heard of one person getting sick from a sausage made by one of us little guys.”
Those rules include no meat storage between 42 and 170 degrees, even if the sausages have been fully cooked in a smoker, the way they are at Kurowyckyj’s. “I spent several hours on the phone with scientists at Cornell, trying to find a way to make my kielbasa and kabanosy so that it’s shelf-stable in the eyes of the USDA , but every thing they told me to do would change the flavor of my product. I’m not a chemist.”
[NOTE: Kurowyckyj's closed in June, 2007.]
For centuries people have eaten salted, air-dried meats without problems, but recent crackdowns that are possibly the result of a few isolated incidences in fast-food chains contradict the news that the USDA is now, ironically, allowing unrefrigerated charcuterie such as prosciutto from Italy, serrano from Spain, and saucissson sec from France to be imported into the States. Of course, nothing is to stop serious home cooks from making their own, and there are several new books on the market, as well as a handful of classics such as those by Jane Grigson and Bruce Aidells, that will help you along.
I helped edit and translate the American edition of French chef Stéphane Reynaud’s Pork & Sons, which was released here in April by Phaidon Press. Reynaud’s restaurant near Paris, Villa 9 Trois, has an all pork menu, proudly declaring, “On n’y mange pas que de cochon.” Michigan chef Brian Polcyn teamed with veteran food writer Michael Ruhlman to produce the comprehensive Charcuterie (Norton, 2005), which explains all aspects of salting, curing, and smoking, with careful attention to food safety measures. And now Henderson has teamed with his pastry chef, Justin Piers Gellatly, to produce a sequel: Beyond Nose to Tail: A Kind of British Cooking, Part II (Bloomsbury, 2007).
It’s true that you’ll need a meat grinder, a terrine mold, a kitchen scale, a sausage stuffer, casings, and “pink salt” (a curing salt with nitrite) if you want to make all sorts of charcuterie, but there are no special skills involved. In most major metropolitan areas and online, you can find just about any type of sausage or pâté you might want, as well as any exotic ingredient or cut of meat.
You can also leave the charcuterie to the restaurateurs, who are now offering tail to nose pig cookery in all its many forms. Many chefs are buying whole animals, hanging them for several days to cure, and preparing their own sausages and head cheese. At Acadiana in Washington, Chris Clime serves all manner of pork, from braised Berkshire pork belly to classic cajun sausages such as andouille.
Some chefs even admit to cheating a little, recalculating the temperature on wine coolers so that their dry-cured meats and sausages can hang at 55 to 60 degrees, the way they do in the rest of the world. But I won’t tell.
The truth is, fresh sausage making is easy and fun, and the best part is that you can truly season it to taste, by frying a little to see what it’s like, then adding a little more pepper or fat or sage or garlic. If you don’t have a meat grinder, buy one. Many electric mixers have grinder attachments available; be sure to get a sausage horn as well.
I included recipes for ham paste, lard, duck pâté, oyster sausages, country sausage, blood pudding, hog head stew, head cheese, country ham, and duck breast hams in my lowcountry cookbook. I guess I was ahead of the curve, but the book has remained in print for 15 years. Here’s my recipe for simple country sausage.

You can fry this sausage in patties, stuff it into casings, or use it as an ingredient in other recipes that call for sausage. I use it in stuffings, in biscuits, smoked in links for gumbos, and as a breakfast meat. Use the recipe as a guide only. If you are stuffing the sausage into casings, this is a good recipe to do with a friend, as the extra set of hands will be appreciated.
Makes about 3 pounds
3 pounds fatty pork or 2 pounds lean pork and 1 pound pork fat
1 tablespoon salt
½ teaspoon black peppercorns
1 teaspoon hot red pepper flakes
1/2 teaspoon rubbed sage or 3 or 4 fresh leaves
1 teaspoon Quatre-Épices (follow link to recipe)
1 teaspoon mixed dried herbs such as herbes de Provence or Italian seasoning
1 teaspoon fresh rosemary leaves or ½ teaspoon dried
½ teaspoon fresh thyme leaves or ¼ teaspoon dried
6 to 8 feet of cleaned hog casings (optional; see Note)
If your meat grinder comes with a coarse and a fine grind attachment, grind the meat first through the coarser disk. Put all the remaining ingredients in a spice mill or blender and process until ground evenly. Add the ground seasonings to the meat and mix in well. In a frying pan on top of the stove, fry a little piece of the sausage and taste for seasoning. Correct the seasoning to your own taste. If you think the sausage is too fatty, you may add some more lean meat (and it needn’t be pork: veal is fine, and oysters are delicious); you may want more hot peppers.
Put the properly seasoned forcemeat through the fine grinder. If you are stuffing the sausage into casings, attach the sausage stuffer to the grinder, with the casings tied at one end and placed over the end of the funnel, ready to be filled. Tie off stuffed sausages into 4-inch links. Cover the sausage(s) and store in the refrigerator if you are not using immediately. You can smoke some or all of the sausage – or partially smoke it. It also may be frozen.

Note: Casings, available from your butcher, are sold sometimes frozen, packed in salt. To clean them, run water from a faucet through them several times until they are free of all salt crystals.