I had a freak accident in the kitchen this morning… not involving a knife, but, still, I managed, while drying a glass bowl, to sever the tips of two fingers. Tomorrow I’m getting a new computer system, so I won’t be online for awhile as we make the changeovers… and then I leave on my my honeymoon for two weeks… but, please, stay tuned!!!

October 5, 2010 Smithsonian, Pig Island, the Washington Post, and a trip to France 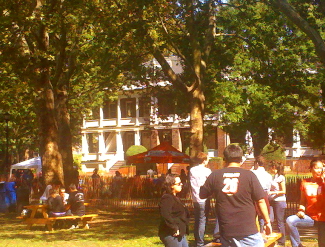 It’s been such an exciting year for me — I’ve been a frequent lecturer at conferences and special events, culminating with a sold-out evening at the Smithsonian last week and then a porkfest in New York at the smoothly run and culinarily exciting Pig Island on beautiful, surreal Governor’s Island, overlooking downtown Manhattan.

Tomorrow I have an article running in the food section of the Washington Post on oystering in the Chesapeake Bay, then Mikel and I leave for our honeymoon in Provence next week. I can hardly wait.

Pig Island was the brainchild of the inimitable Jimmy Carbone, of Jimmy’s No. 43 in New York, and I was very impressed with not only how smoothly it was run, and how delicious all the food was, but also how NICE everyone was. I was paired with my friends from RUB (Righteous Urban Barbecue), and we served well over 1000 people pulled Eastern North Carolina style barbecue (recipe appeared on blog on March 17, 2008)and Moravian cole slaw (recipe here on August 12, 2007). EVERY person I met was just as pleasant as he or she could be. I know that it was a gloriously beautiful day, but I didn’t see one hint of anything other than kindness and joy all day long. (Pictured at right, Jimmy and Andrew Fischel of RUB.) RUB Pitmaster Scotty Smith and his assistant Warren really did a great job with the four 50-pounds shoats. There were about 25 different restaurants represented, and everything I tasted was delicious. I think that we were the only ones who slow-smoked the whole hogs, though Sam of Waterfront Ale House, where he’s been for 22 years, made some killer head cheese. 19 years ago, when my first book was published, many people scoffed at my traditional game dishes and charcuterie recipes. Now, I’m thrilled to see that even some of the fanciest digs are offering their own salami and other dishes of offal. If you’ve got a hog and a meat grinder, it seems a sin NOT to use the entire animal, and the delicious heritage breeds from the Piggery in upstate New York (no one could tell me exactly what breed they were, but they really tasted like pig — not like the flavorless “other white meat” you find in supermarkets) that everyone was given to cook were a real treat to work with.

Souse is a traditional Christmas dish both in Charleston and on Barbados, where so many of the city’s early settlers and slaves first lived. I put it out on New Year’s, before the hoppin’ john, with beer and crackers, to ward off the ill-effects of the night before. Charleston Receipts, the Junior League’s iconic cookbook from 1950, notes, “Have butcher clean head and feet.”

Add the head and the feet to a big pot, cover with water, and boil until the meat fall off the bones, about 2-3 hours, depending on the age of the hog. Remove the head and feet from the liquid, and pick out all the bones and fat. Refrigerate the liquid overnight. The next day, skim the grease from the surface of the liquid. Put the picked meat in a pot, add the remaining ingredients except the fat, and cover with the liquid. Bring to a boil and allow it to cook until it just covers the meat. Line bread pans with pig fat and pour the mixture into the molds. Refrigerate until ready to serve. The souse will harden into a jelly which can be sliced. 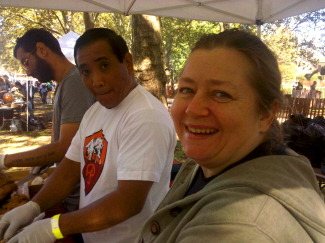 I met so many wonderful folks and great cooks, and got to see some old friends as well. Sara Jenkins, of Porchetta (photo at left), had me over for a simple pasta dinner of lamb and rapini. I hadn’t seen her in years and had not yet met her sweet husband or her precious three-year-old. Her Italian roasted pork is succulent and redolent of fennel pollen and rosemary. She’s getting ready to open a pasta restaurant as well. 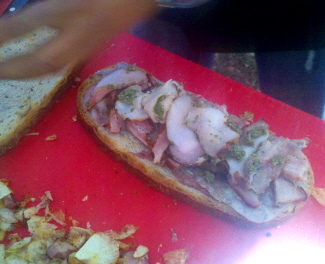 Heather Carlucci, the pastry chef who had an Indian restaurant for awhile, was dishing out her outrageous maple bacon sticky buns. She and her husband opened Print earlier this year. The Junior Ping Pong Champion, Will Horowitz, was serving up delicious Southeast Asian style sausages from his Ducks Eatery at Spin, where his diminutive sous-chef is Laotian. Richie Akiva’s “Eat-a-Pig” sandwich from Butter (pictured) was truly over-the-top, full of great flavors and textures (including potato chips). Sorry for the poor quality of the photos, but I was using my cell phone and it was covered with fat from mixing the sauce into the meat as we pulled it from the bones and chopped it. Folks lined up to get these foods, many of which were conjured just for the event. RUB doesn’t normally served my mayonnaise-free cole slaw, for example, but I bet they might consider putting it on their menu now. Here’s Scotty and Warren serving and a closeup of Scotty chopping meat, which we took turns doing. 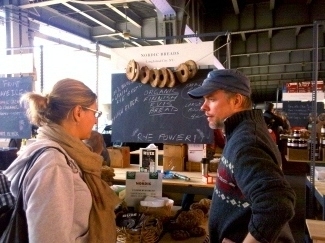 It was a great event and I was honored to be involved.

Claire Hartten and her husband Mike Marek invited me to stay in their charming carriage house in Brooklyn Heights, just a few blocks from the ferry to Governors Island. Claire is involved in many food projects, both here and abroad, and she and Mike took me to the New Amsterdam Market on Sunday morning before I left, where Jimmy and Sara and several dozen farmers, bakers, cooks, cheesemakers, fishmongers, and butchers are hawking their goods and trying to convince the city to let them move into the old Fulton Fish Market, on the grounds of which the market is held, so that restaurants will have a centrally located wholesale market to facilitate a sustainable farm-to-table movement. I bought cheese and a duck and some Nordic Breads. Here’s Claire with the baker, Simo.

The only “down” moment of the weekend was the stunningly beautiful view of lower Manhattan, which to me seems just not right without the Twin Towers. David Bowie’s song, “New Killer Star,” begins, “See the great white scar over Battery Park,” and I could not get the lyrics out of my head. 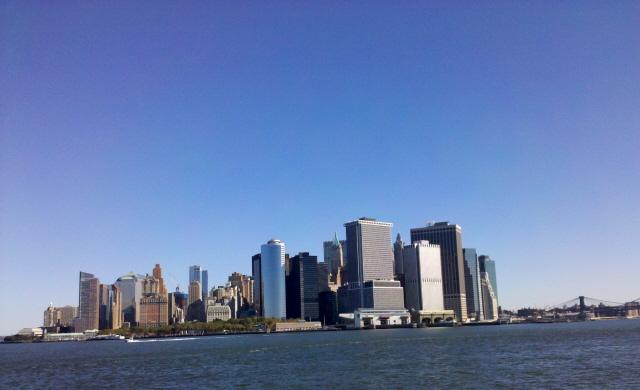 Oystering on the Chesapeake 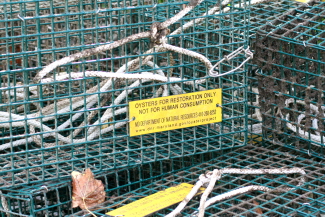 My article on oysters will appear in tomorrow’s (Oct 6, 2010) Washington Post, which you can read online. (You may have to register, but it’s free. If you have an extra email address you don’t use, use it. That’s what I do.)

Since the oyster population in the Bay is less than 2% of historic high levels, all sorts of oyster replenishment programs have been implemented over the years. Perhaps none has been as popular as the oyster “gardening” programs in which citizen volunteers are given cages of young oysters, called spats, usually no more than 1/2″ in size (and which are attached to older oyster shells), to raise off their private docks. After a year, the oysters are then placed in sanctuaries, which are off-limits to oystering. I had the great privilege of watching a truckload of oysters being delivered to Eagle Cove School at Gibson Island (the only waterfront school in Maryland), which is one of the drop-off/pickup points for oyster spat and cages. A similar program was begun several years ago in Virginia. Two years ago it was begun in one river in Maryland; now in 19 Maryland rivers, nearly 8000 cages will be delivered to volunteers by the end of the month. A mature oyster (3 years old) can filter up to 50 gallons of water/day, so not only are their populations being increased, but the waters are being cleansed in the meantime. 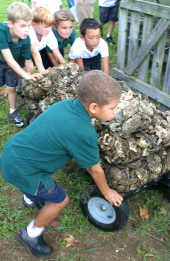 The children learn some biology and ecology as their environmental awareness is strengthened. Through the study and nurturing of the young oysters, the students will learn, through the school year, not only science, but math, English, and social skills as they work together, record the oysters’ growth, read stories and poems about oysters, and, hopefully, eat some at home throughout the oyster season. You should have seen these kids. Too cute! My article includes three recipes as well. 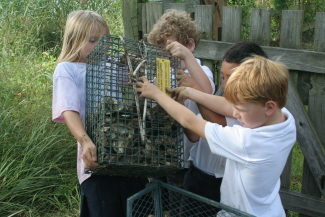