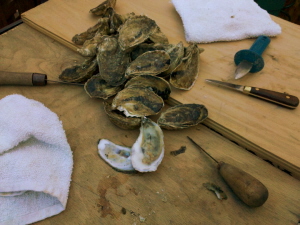 I hope you all have a wonderful holiday season. I’ve had workers in our house, painting and caulking and generally sprucing it up for sale, and I hadn’t done much cooking until the weekend. I’ve been eating out a lot, often in the neighborhood. Tom Sietsema reviewed our local pho restaurant which serves the best I’ve ever had in today’s Washington Post. I hope I can still get in!

With the newly cold weather, I found myself buying ducks and big cuts of meat and sausages and oysters to cook over the holidays. We’re supposed to get 6 inches of snow today. Mikel made a pot roast in the slow cooker yesterday and we had truffled scrambled eggs (just whisk in some truffle butter from D’Artagnan near the end of cooking) and oysters before going to the home of Ann Brody and Larry Cove for Christmas dinner last night. I took collards and a bunch of oysters that I had opened, sliced them free from their shells but left them in the shells, replacing the top shell. This is a trick I learned in Rome a few years ago on Christmas Eve at the home of Sophie Marland, the French comedienne, whose brother flew in with fresh oysters from Brittany. It seems that oysters will produce liquid after they’re opened — up to seven times, according to some sources! (This article is not factual, but if you scroll to the end, you’ll see mention of the technique.) Even after riding in the car en route to the Cove house, the oysters were juicy and very flavorful. We added no condiments of any kind. The photo was not styled or posed. I was opening an oyster and simply pulled out my cell phone and snapped.

We had another duck on the rotisserie, which I wrote about in April. Today I think I’ll go downtown to see the Arcimboldo and Cypriot exhibitions. We’ll eat Mikel’s pot roast tonight. 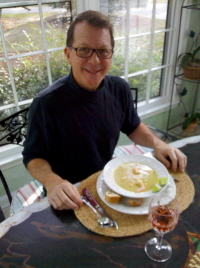 We went to South Carolina to celebrate my mother-in-law’s birthday and no sooner had we landed than I saw a man selling heads-on shrimp right off the boat on the side of the road — for $4/pound! When we got home, a frost threatened, so we pulled the last of the green tomatoes from her vines and I made one of my all-time favorite soups. Mikel took photos of me cooking and I’ve posted them on my Facebook page here. This soup is infinitely variable. I first had the soup at Ben and Karen Barker’s marvelous Magnolia Grill in Durhan, North Carolina, and first published the recipe in The New Southern Cook in 1995. Here’s what I wrote then. I wouldn’t change a word today, though I often change the ingredients (type of stock, number and type of peppers, etc.) as the season and market dictates. This weekend, for example, I used limes instead of lemons and cut down on the heat for Mikel’s mom. The recipe took 45 minutes, start to finish, including making the stock from shrimp heads.

Green Tomato Soup to be Served Hot or Cold 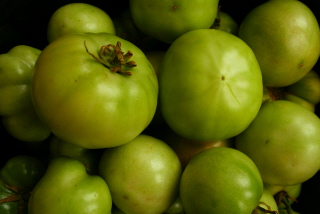 This recipe came to me from Ben Barker, who, with his pastry chef wife, Karen, is the chef-owner of the Magnolia Grill in Durham, North Carolina. Durham lies at the center of the “Triangle” formed with Raleigh and Chapel Hill, one of the country’s most progressive scientific research communities and home to N. C. State, U. N. C., and Duke. Academic types mix with good ol’ boys, and nowhere are the results more evident than in the kitchen. This newfangled soup of Ben’s is both hearty and refined; it bears witness to

what sociologists are calling “the New South.” It’s delicious and easy, too! 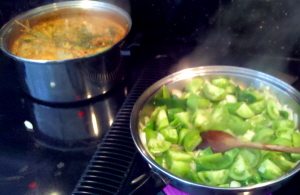 Tabasco or other hot pepper sauce

*crab and corn pudding (the recipe appeared on the blog on September 2, 2008)

In a large sauce pan cook the onion in the fat of your choice over moderate heat until soft but not colored, about 5 to 10 minutes. Add the garlic, the bay leaves, and the chilies and cook for another 5 minutes. Add the tomatoes and the stock of your choice and raise the heat. Bring to a boil, reduce to a simmer and cook for about 15 minutes or until the tomatoes are thoroughly softened.

Remove the bay leaves from the mixture and puree the soup in a blender, working in batches. Season to taste with capers, lemon juice, salt, pepper, and Tabasco or hot pepper sauce. Serve hot or cold with the garnishes of your choice. Ben says, “We typically serve it cold with crabmeat or pickled shrimp and crème fraiche or hot with country ham, boiled shrimp, and sour cream…but any variation works.” His preferred stock is shrimp. 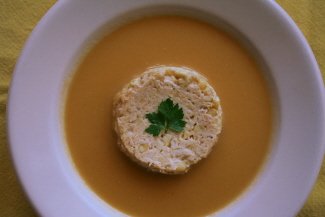 I like to unmold the Crab and Corn Pudding into a pasta bowl and ring it with this soup, served cold (see photo, left).

Debbie Recommends: This needs a very crisp, but not overly acidic wine, such as St. Supéry Sauvignon Blanc.

NOTE: Capers come in a variety of sizes, usually pickled in a vinegar brine. They are also available packed in salt. Whichever type you use, be sure to rinse them well first, or add them first and taste the soup before adding lemon juice or salt.

Now that it’s finally cooled off a little, I’ll be making heartier meals, such as this gumbo which is one of the most widely copied recipes in the South. It does not depend on the fresh shellfish that so many other gumbo recipes demand. It is an ideal way to feed several hungry mouths with inexpensive duck and sausage and it is absolutely delicious. In slight imitation of a Vietnamese idea, I hold the duck breasts out of the soup until the last minute, then sear them and the sausages just before adding them to the gumbo.

You will need to begin this recipe several hours — or the day before — you are planning to serve it.

For the duck fat roux, skin and stock:

a handful of fresh herbs

The French call a boneless breast of duck a magret. To obtain two magrets from a duck, place a whole unskinned duck on its back, with its neck end toward you,  on a cutting board. Slice down the very center the full length of the bird, through the skin and flesh to the breastbone, then down along the breastbone on each side. Attached to the breastbone there is a narrow strip of meat which has a tendon running through it. The breast halves will easily separate from this “tenderloin.” Bring the tip of the knife down to the wishbone, which forms an arch around the neck cavity, and cut the breastmeat free from it on each side. Then, holding a breast half in one hand and the knife in the other, pull each breast half away from the rib cage, running the knife over the “tenderloin” and along the rib cage. Pull the halves  out away from the body, and slice them free from the wing joints. At this point, you may use kitchen shears, if you prefer, to cut around the magrets to free them completely from the body. This method may be unorthodox in butchering circles, but it is easy for even the novice, and eliminates the possibility of cutting into the flesh of the breast.

Sprinkle the magrets with salt, pepper, and cayenne and place on a nonreactive plate, covered, in the refrigerator.

For the stock, the duck fat, and cracklings

Put the carcass and the remaining ingredients in a stockpot on top of the stove, bring to a boil, reduce the heat, and cook over a low boil until the duck is tender, about an hour, skimming fat and scum from the surface as necessary. Strain the stock and pick all the meat from the carcass. Set the stock aside to cool and refrigerate the meat.

While the stock is cooking, melt the duck fat and make the cracklings as follows: 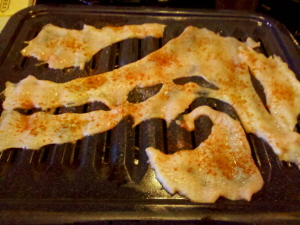 With a thin-bladed sharp knife, scrape any excess fat from the skin and place the pieces of skin on a cookie sheet, spread out flat, or, better yet, a roasting pan with a raised, perforated insert that allow juices and fats to darin off as they cook. Sprinkle them with cayenne and salt, and bake in a 400o oven until they are crisp, 20 to 30 minutes. You now have crisply cooked “cracklings” which are delicious as snacks or to garnish the salad you serve after the gumbo. I cut them into little bite-size pieces.

Put all of the excess fat and any remaining pieces of skin in the work bowl of a food processor and purée. Cover the bottom of a saucepan or skillet with water (a couple of tablespoons is enough), then add the puréed duck fat and skin. Heat over low heat until all the water has evaporated and the fat is clear. Strain what you do not intend to use into a container and keep covered and refrigerated. It will last several months. I keep a jar in the freezer so that I can continue with the recipe, then add the new batch of roux to my frozen stash. 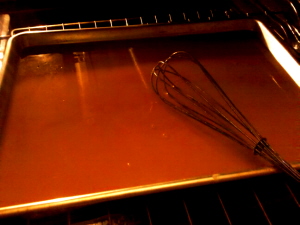 In New Orleans, every gumbo recipe begins with the line, “First, you make a roux.” The easiest way to make a roux — a cooked flour paste used to thicken the gumbo — is to use the oven, rather than stirring a pot for an hour. Since the slightest burned speck of flour will destroy the delicate nutty flavor of a properly cooked roux, it is much easier to bake it, which frees you to start chopping the “Holy Trinity,” as Cajuns call the onions, peppers, and celery that add zest to the gumbo.

Mix equal weights of melted fat (vegetable oil, lard, duck fat, or any combination) and flour in a sheet pan and bake in a preheated 350-degree oven until the desired color is achieved, stirring the mixture every 10 or 15 minutes so that it does not scorch. Cook the roux until it reaches a rich mahogany color. Remove some from the pan and allow the rest to reach an intense chocolate color. The darker roux goes into seafood gumbos. Freeze what you don’t use immediately in 1/2-cup quantities.

The next day, or about 2 hours before serving:

1 pound capped and cut up okra

stock from above (about 2 quarts)

salt, pepper, and hot pepper (either chopped fresh or a bottled sauce) to taste

Heat the roux in a large Dutch oven, then add the garlic, onions, celery, and green pepper. Cook over medium heat until the onions begin to clear, stirring constantly, about 10 minutes. Add the okra and cook until all ropiness is gone, about 20 minutes, stirring often. Add the stock gradually, stirring it into the mixture, and simmer uncovered for about an hour or so. Taste the soup for seasoning, and adjust to taste, remembering that the soup will have the seasoned magrets and the sausage added later. About a half-hour before serving, put your rice on to steam and add the picked duck meat to the gumbo pot.