A meal at Musa Dagdeviren’s remarkable Ciya Sofrasi in Kadikoy 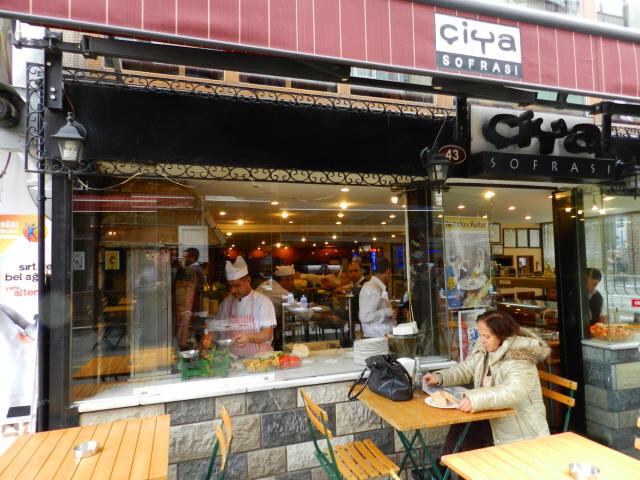 Long before I had planned my itinerary, and before I had gone back to my friend Tom Sietsema’s Postcard from Istanbul to see where he recommended, and before I had consulted my colleague, the great Mediterranean culinary expert, Paula Wolfert, I knew that I was going to eat at Ciya Sofrasi on the Asian side of Istanbul. How could I not? The folks at Istanbul Eats had written that it is “very likely the best restaurant” in the city. There had been a huge profile of the chef in The New Yorker last year. And I remembered two articles that Paula had written about his culinary wizardry. When I did go back to Tom’s article, I see that he noted, “There may be no finer food in the city. Part of the enchantment of dining at Ciya Sofrasi is reaching it via a short ferry ride to the Asian side of the Bosporus.” I contacted Paula and she said that it’s her favorite Istanbul eatery, that I should definitely go, and, when I do, to send the chef her regards. 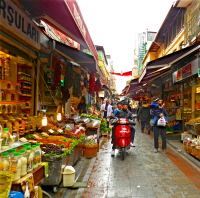 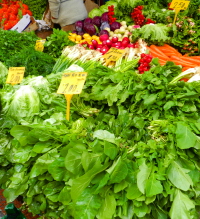 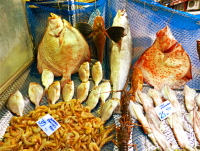 Tom’s right, the boat ride is fun.You get great waterfront views of both the new and old parts of the city, there are people from all walks of life on the ferry, and, if you are lucky the way we were, a pod of dolphins will cavort in the ship’s wake. But just a couple of blocks from the dock, you enter a part of the city that has neither the sleek, hip commercialism of Karakoy, the New District, or the faded glory of Istanbul’s Old Town. Kadikoy Carsisi, the historic center of this westernmost Asian city, hosts one of the best market areas I’ve ever visited. Trendy boutiques, gourmet shops, vegetable stalls, bakers, and fishmongers share the bustling area with restaurants, historic churches, and mosques. Yes, it’s crowded, even as shops are just beginning to open. You will note in the photo above that shoppers have moved out of the wayof the teenagers on scooters, but you may also see that the streets have been hosed down. It was so much cleaner than the Old City. One of the first things I noticed was the mounds of greens — chard, beet greens, and turnips! I have complained bitterly about the lack of leafy green cooking vegetables in Bulgaria, so I was thrilled to see all sorts of them in the market just a block from the restaurant. In Istanbul Eats: Exploring the Culinary Backroads, I had read that the daily menu, “which always features a variety of vegetarian dishes, changes according to what’s in season.” I knew I was in for some delicious greens. I also was hoping for some of the gorgeous seafood I was seeing, but, alas, they only serve very special, in-season fish, and only ones that are sustainable. I shouldn’t have worried. The feast I was about to eat was fit for a sultan. 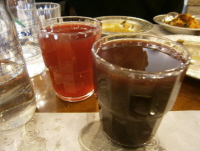 The restaurant is nothing special to look at. The tables are simple wooden cafe tables with paper placemats. Unless you arrive very early, the way we did, your table will probably be jammed up against other diners’. I don’t think there’s any alcohol, but who cares? We drank Karadut (black mulberry) and Sumac Serbets (not to be confused with frozen sherberts, though the word sounds similar), made by boiling the fruits and herbs in water until they are softened and have given up all their flavor to the juice. The drink is sweetened and chilled before serving. 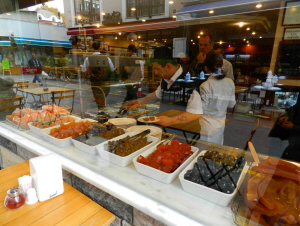 When we first approached Ciya Sofrasi, I was mesmerized by the crystallized fruits and vegetables in the window to the right. The waiter is serving up vegetarian dishes, which you choose when you walk in, and which you pay for by weight. In the photo at the top of the page, the chefs on the left side of the entrance man the stew pots full of the hot main dishes, per the esnaf lokantasi (“workers’ restaurant”) tradition. Reflected in the window are the chef’s two other locations — the Ciya kebab houses. Go to Sofrasi instead: there are several dozen kebabs available if you must have them, but the real reason to come here are the intriguing and rare dishes, the recipes for which Chef Dagdeviren, who is a culinary historian and sleuth, has been gathering across the country for years in hopes of salvaging not only the culinary traditions, but the lost tastes of a culture. 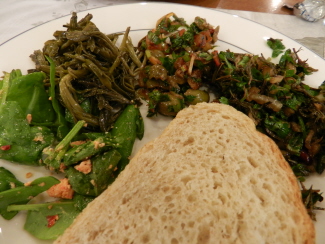 When we walked in, I asked if the chef were in, but was told that he wasn’t. The maitre d’ could not have been more cordial, even though I spoke not one word of Turkish. I told him I was a food writer and a friend of Paula Wolfert’s and he all but genuflected when he heard her name. I asked if he would help us choose our dishes, and explained to him that I have really been missing greens. He grinned and nodded toward the vegetables and began suggesting all sorts of things — some of which I had never heard of. Stupidly, I took photos instead of notes. There was a salad of sheep’s sorrel and another sour green that had been lightly wilted. We had a blackeyed pea salad and a dish made mostly of wild thyme. Yogurt was chock full of wheat berries. The bread, though white, tasted of wheat, not yeast. 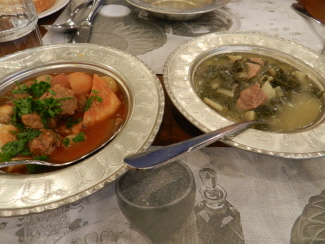 The warm dishes began arriving. Turnips with their greens stewed with beef. Lamb stewed with radishes and tomatoes. (Both in the photo at right.) A creamy braise that tasted like exotic potatoes was actually made with wild local mushrooms; it was flavored with some tiny whole-grains of a bittersweet spice that exploded with flavor when they popped in your mouth. The stuffed, dried eggplant was a revelation to me. (I saw some hollow dried eggplant hanging in a Moroccan restaurant here in Bulgarian; I’m hoping I can find some at the Women’s Bazaar downtown.) 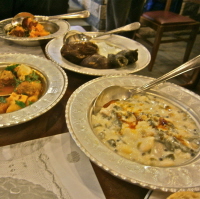 They sent us a classic perde pilavi, a chicken pilaf encased in dough,  that made the lackluster one we had had a couple of days before slip from my memory. It was aromatic with spice and, like many of the best dishes of Asia, a perfect combination of not only flavors, but textures as well: chicken, rice, almonds, and currants. 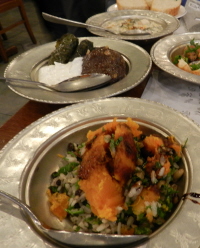 I especially loved the roast pumpkin with parsley, rice, currants, and pomegranate molasses. And the stuffed vine leaves, served with thick, fresh yogurt, were as good as I’ve had. (Photo at left.)
I was getting full, but I had asked about the candied fruits in the window as soon as I walked in, and was told that the window held the dessert selection. Every bite so far had been stunning. Though I rarely eat desserts, I wasn’t about to stop at that point. I love candied fruits. We ordered an assortment, and they sent us a cup of a warm drink made with ginger, cinnamon, walnuts, honey, cloves, and allspice. 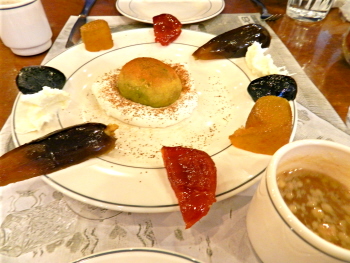 The dessert plate (photo, right) included, clockwise from 6 o’clock: a candied tomato with a sweet jelly-like center; candied eggplant stuffed with nuts (you can see a piece of walnut masquerading as a stem); a thick, creamy, mint-flavored dip for the jellied fruits; a candied green walnut (another flavor revelation! Next time I’ll buy the green walnut preserves I see in roadside stands in the summer in the Balkans!); candied orange; and, in the center, his own kerebic, a semolina and pistachio treat served with a sugared “cream” that is made with the root of a tree from Antakya. It aids digestion and is supposed to make you feel as though you could eat the entire meal again. They told us the story, but we weren’t buying it. I was truly satiated. Nevertheless, a restorative cup of wild thyme tea came to the table. We would need it for the chilly boat ride back. 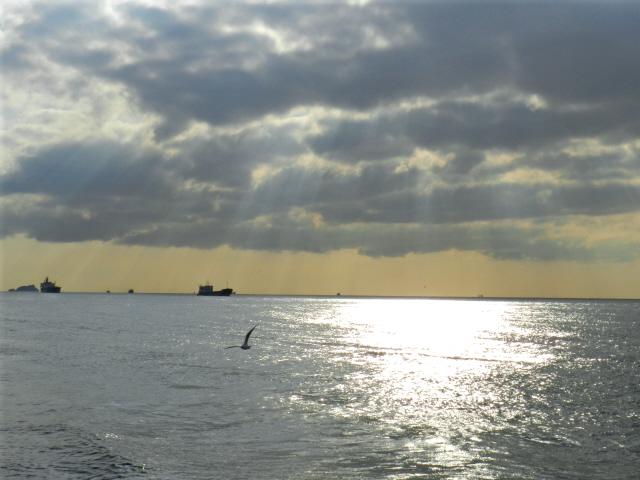