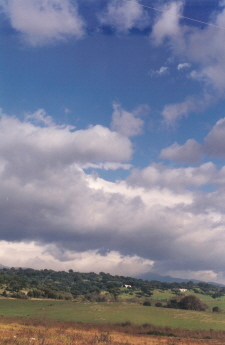 I visited the region in early November, at the height of harvest. Only the healthiest, cleanest peppers are allowed in the secaderos (drying-houses), where they are slowly smoked. Trunks of the holm oak (Quercus ilex) are allowed to slowly smolder for 12 to 15 days on the concrete floors of the simple smokehouses. No twigs or thin branches are used because they burn too quickly and hot. When the whole peppers are picked, they are still alive; they continue to mature for the first seven days of the curing process, during which time the flesh is impregnated with the smoke, which preserves their natural red color. When the humidity level of the peppers has reduced to 15%, they are ready to be ground, and are full of the smoky aroma. 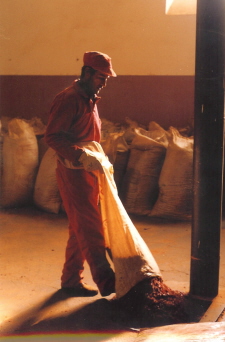 I was reminded of my millers’ grinding of corn, which must have no more than 14% humidity to be ground, and which, like the peppers of La Vera, are ground between large stones, which are never allowed to get hot to the touch (in La Vera, the DOC requires a temperature below 50? C or122? F). 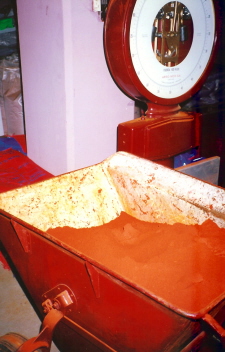 There are three varieties recognized by the Consejo Regulador of the DOC: dulce (sweet); agridulce (or ocal, bittersweet), which is slightly spicy;  and picante, spicy, which though not hot by American standards does pack a little heat, but, more importantly, retails the smokiness.

Not long ago, pimenton was hard to find in the States, but these days I see it in supermarkets. It is also called Paprika de la Vera. It is the traditional seasoning in chorizo, pulpo a la gallega (octopus in the Galician style), and in many soups and stews. Here are typical recipes from the region. There are other places in western and southern

When I was last there, I stuck some seeds I found on the ground in my pocket, brought them home, grew the peppers (see photo, below), and slowly smoked them over smoldering oak chips. I then ground the peppers, and the result was alright, I guess, but it was no pimenton. In the photo the Spanish cook is adding a pinch of pimenton to fresh peppers and onions in a skillet to which she then added already cooked quail. 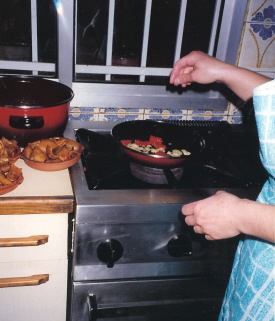 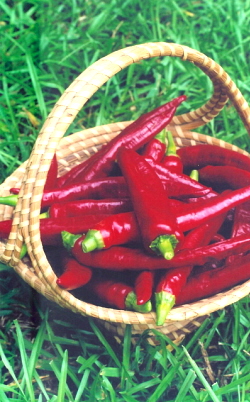