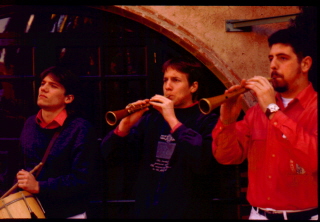 In Catalonia I attended a calcotada, an amazing late winter/early spring festival that celebrates the harvest of calcots, a Catalan variety of green onion. A year and a half before the harvest, onion seeds are planted in the fall, on the waning of the Harvest Moon. When the seedlings are a few months old, they are set out and grown until midsummer. Then they’re pulled up and put in the shade to dry. Several months later the dried bunches of calcots start sending out new sprouts which are divided and planted in trenches. The farmers then mound the earth up around the growing sprouts so that they are blanched, like Belgian endive and white asparagus. Calcar means to “to put on boots”; the soil is the boot around the onion. The calcots are harvested from January through March. 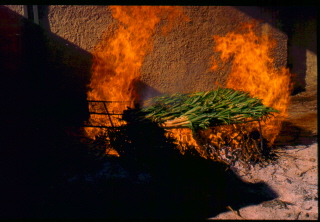 The original celebration began in the old city of Valls in the “Alt Camp” area of Catalonia, west of Barcelona above Tarragona. It has spread to the neighboring villages along with the older celebration of the “castells” — human towers. The calcotada I attended was at the rustic country restaurant Cal Ganxo in the village of Masmolets, surrounded by cava vineyards.
The freshly dug calcots were roasted over an open fire of vine cuttings for ten to twenty minutes, until the outer skins were charred black. Bunches of a dozen or so calcots were then placed in newspaper and tightly wrapped so that they continued to steam. Once inside the restaurant, which is inside an old mill, we were given bibs and bowls of a delicious romesco sauce, chunky with hunks of almond crushed by hand in a mortar with roast peppers and garlic and the fruity olive oil of the area. The blackened calcots were then presented to us on curved roof tiles and we devoured dozens of them with a fruity but bone-dry Vino Rosado from Navarra. [These lovely rose wines, made from 100% Garnacha (Grenache), have become one of my favorite summer beverages. ] 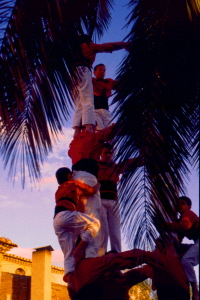 After an hour, we were brought braziers of grilled lamb and sausages from Valls, white beans from Ganxet, and lots of ali-oli. The traditional Catalan cream that followed for dessert was an orange-scented creme brulee. Afterwards, we went outside for the amazing spectacle of the Xiquets de Valls, the human towers or pyramids that embody the heart and soul of each community.

I kept thinking I wanted to move to Masmolets and raise children there, so powerful was the sense of community. Everyone participates as the tower grows up to six, seven, eight, even nine stories high. There is a hushed awe over the crowd as the little band of three plays the traditional tune that is at once blaring and plaintive. 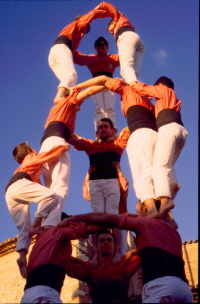 In the photos you can see members of the community supporting the base of the tower. That’s Clara Maria de Amezua in the final photo. One of the great food writers of Europe, Clara Maria has been described as the Julia Child of Spain. Much more profondly aware of her own country’s culinary heritage, she was awarded the Silver Spoon Award by Food Arts magazine in 2006 for her tireless efforts to educate the world about Spanish cuisine, both new and old. 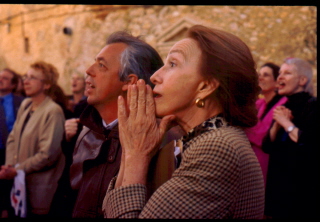 To enjoy an authentic calcotada in Catalonia, contact Cal Ganxo, Ctrz. Tarragona-Lleida, s/n, 43813 Masmolets; tel. 977 60 59 60 or 977 60 02 25.
Grilled “Calcots” with Romesco
For a real calcotada, you’ll need to go to Catalonia and have calcots grilled over vine cuttings. Barring that trip, however, you can grill large fresh scallions or very small leeks (either should have lots of white showing) with similar results. Cut the roots off the plants, but leave the base so that they hold together when grilled. Leave an outer layer of green leaves if there is one. Build a very hot (preferably wood) fire and toss however many onions or leeks you think you and your guests can eat on the grill so that the flames lick the vegetables. Cook until they are blackened on one side, then turn them and grill them on the other. When they appear completely black, wrap them in newspaper until you are ready to serve.
Have some lamb and vegetables ready to grill after the fire dies down. Eat the onions with the romesco sauce (below) while the lamb and vegetables are grilling. Follow the meal with an orange-flavored custard.
Romesco Sauce varies widely among Catalan cooks. Some use roasted peppers and others use tomatoes; many use both. Since the sauce is named for a type of dried sweet red pepper called the romesco, I lean toward peppers. You can dry your own bell peppers by cutting them in half, coring them, stemming and seeding them, and placing them in a warm oven for about two days. Or you can try to find dried sweet peppers through a Spanish foods purveyor.  What you are looking for is either the pebrot de romesco or a round one called nyora; otherwise, use a sweet dried pepper such as an ancho or mild New Mexico, never a hot one (though I do think that a tiny pinch of cayenne is a welcome addition).
Traditionally the sauce was made in a mortar, grinding the peppers with garlic and nuts. I also think that’s the only way to get the right consistency. Some cooks use fried bread instead of the nuts, but since the version I tasted at the calcotada had both, I’m including them here. Traditionally, the garlic, nuts, and even the tomatoes are fried, but many modern cooks now roast them all for more depth of flavor. 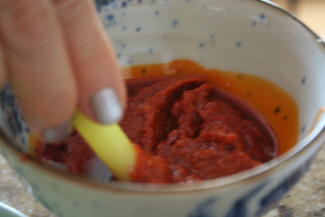 Romesco Sauce:
2 dozen raw almonds
1/2 cup extra virgin olive oil
2 dried sweet peppers (see above)
1 small dried hot pepper
4 garlic cloves, peeled
1/2 cup cubed white crustless bread    such as from a baguette or an Italian loaf
1 ripe tomato, peeled, seeded, and chopped
2 tablespoons dry white wine, more or less
2 tablespoons white wine vinegar or lemon juice, more or less
salt, freshly ground pepper, and, if desired, cayenne
Pour boiling water over the almonds and allow them to sit for several minutes, then peel them by rubbing them in a clean towel.
Heat half the oil in a skillet over medium heat. Pull the stem end off the pepper and shake out the seeds. Add the peppers to the oil and fry for just a couple of minutes. Be careful not to burn them. Remove the peppers from the pan and place them in a mortar or in a blender.
Add the almonds, the garlic, and the bread cubes to the oil, frying until browned. Remove from the pan and place in the mortar or blender. Add the tomato to the pan, cooking until soft, about five minutes. Add the tomatoes to the mortar or blender and grind until a fairly smooth paste is formed. If there is any frying oil remaining, begin drizzling it in as you continue to grind. Add the vinegar or lemon juice, grinding continuously as you do, and tasting as you go along. Drizzle the remaining 1/4 cup of oil into the mixture in a thin stream while continuing to grind, until the sauce is glossy. Correct the seasoning with salt, pepper, and, if desired, a pinch of cayenne. Serve immediately or at room temperature.
Makes about 1 cup, to serve 4 as a dipping sauce for a plateful of grilled onions or leeks.