Home » Other writing » The Golden Rule

When I moved to the nation’s capital from South Carolina, I knew that I could not afford to live, the way I had back home, on the water or in trendy neighborhoods with shops and restaurants. Perhaps I could have rented or purchased a much smaller house, but I really wanted an extra room for my guests. I also wanted access to public transportation and nearby parks, where my dog could run and play. So my partner and I bought a house in a neighborhood that is traditionally African-American and Hispanic. We are a white gay couple.
Our house is a typical urban row house, but our street is one-way and one block long. From Day One, I could tell that everyone on the street knew each other, whether or not they got along. I wanted to fit in, but I feared that there might be some animosity toward us, since our house was the first on the block to have been totally renovated. We easily could have been seen as the gentrifiers who are changing neighborhoods throughout the city. I didn’t want my neighbors to judge me and I didn’t want to judge them. We just wanted to be, and to have, better neighbors than we’d had or been before.
I am not religious, but I believe in the Golden Rule. Treating others as I would like to be treated has worked for me. I’ve found my neighborhood, and it has welcomed me.
When we invited 75 of our neighbors into our home to celebrate New Year’s Day in the traditional southern manner, with collard greens, hoppin’ john, and roast pork, they came bearing gifts. When we began caring for our next-door neighbors’ roses as well as our own, we discovered that they had not spoken to each other in 14 years. It gives me great pleasure to watch them now, trading gardening secrets and plants, talking to each other across my stoop. 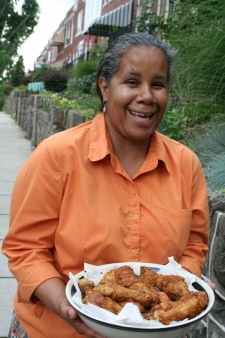 When we had a house full of relatives visiting, I asked one neighbor where I could buy take-out fried chicken. She couldn’t think of any place she would recommend, but when we returned from a long day of sightseeing, we smelled chicken frying, and she brought us a huge platter of it, more than enough to feed the six of us.
While I was cutting the strip of grass that grows between the curb and the sidewalk, another neighbor who travels often, and with whom I’d never had a conversation, admired a tee shirt I was wearing and asked me the story behind it. The shirt has a drawing of okra on it with the word bamiya, in Hebrew letters. I explained to him how I had made the shirts for a friend’s daughter’s Bat Mitzvah. A long story, but bamiya means okra in Hebrew. He thought the shirt was cool. He told me that he works for the Justice Department and that he’s often out of town. He thanked me for cutting the grass. He’s the one who usually does it.

I didn’t see him for a couple of weeks, but when I did, he told me that he had been in Korea and had bought me a baseball cap. On it, he had engraved, in Korean, the letters for okra.
Our neighborhood is the best I’ve ever lived in. I believe what goes around, comes around.